LEVELING THE PLAYING FIELD: Male and Female He Created Them 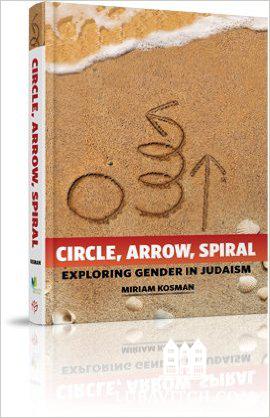 Does the world really need another book about Women and Judaism? Like the “Mommy Wars”—the subject often makes women enemies of one another. One side is shrill and combative, seeing bias and prejudice everywhere, with all differences in treatment seen as signs of the societal squelching of woman. The other is dogmatic and apologetic, insisting men and women are fundamentally different, that women are more delicate/spiritual/sensitive and therefore require different handling, that feminists are intent on destroying the fabric of the family and all that is precious—and that if all is right with the world, nothing would change. It is enough to make the rest of us dread the topic altogether.

And yet Circle, Arrow and Spiral manages to take the discussion to new ground by moving past the opposition of Man and Woman, instead examining the paradigm of male and female that is familiar to every student of Chasidut Chabad: that of mashpia and mekabel—the giver and the receiver.

At first glance, it appears that that the mashpia is the active role and the mekabel is the passive role. But the truth is more complex. The opposite of giving is taking, but the word “take” can be seen as the opposite as receiving as well. Similarly the word “reject” can be understood as the opposite of receiving, but it can also serve as the opposite of the word “giving.” This suggests that, while at first glance, giving and receiving are opposites, in fact, rather than opposing and negating one another, they are mirror images, flip sides of the same coin. Both giving and receiving are positive, active roles; it is the refusal to participate in this dynamic that results in apathy, distance, and exploitation.

As Kosman points out, every teacher knows that one’s best lessons are given in the presence of students who are truly open to learning (ch. 5). The student who is fully engaged in learning brings out a depth in the teacher that never comes to the fore in the presence of a disinterested audience. It can be said that the student creates within the teacher the capacity to give. It is even possible that the student enriches the teacher more than the teacher enriches the student. One who is truly open then to receiving, rather than taking, engages in the deepest form of giving. The quality that distinguishes the receiving from simply “taking” is gratitude(ch.6). One who is grateful, acknowledging and accepting all that the mashpia gives, is able to draw forth the depth of what the mashpia is able to give. As the Talmud states, more than the wealthy man does for the poor man, the poor man does for the wealthy man. It is the person who is willing to accept that transforms the rich man into a giver.

There is risk in being a mekabel, for one must be willing to accept the world on another’s terms. One needs to trust to be a mekabel. And yet, it is this trust and vulnerability that is the deepest act of love. On the flip side, the mashpia requires discipline and restraint, or the mashpia will end up destroying and exploiting the mekabel.

Kosman’s argument is most thought-provoking and resonant when she explores this male-female dynamic in the abstract—playing space against negative space, showing how the roles shift from situation to situation. As she notes, men and women all possess both mashpia and mekabel dimensions, and in balancing love and restraint in our personalities, we give voice to both our feminine and masculine side.

This is a powerful idea with great explanatory power and many applications—and Kosman has done a thorough job of relating it to many midrashim and Torah verses, bringing a deeply edifying reading to many texts. For example, citing the verse, “In the morning, we describe Your kindness and in the long nights, our faithfulness to you,” Kosman cogently analyzes the masculine dimension of truth and kindness—and the feminine staying power of faith and trust (ch. 29). Conception, with all its potential, happens in a moment; yet the gestation of the child that leads to birth is a lengthy drawn out process that requires staying power. Likewise, the Jewish people received truth from G-d and since then have gone through a lengthy gestational process in trying to “give birth” to that truth, which is the perfected Messianic world.

Kosman’s book heavily footnotes her Jewish sources, a feature that is of great use to the reader who wishes to explore this perspective further. Many of her explanations are derived from the work of the Maharal, and she succeeds in allowing a greater audience to appreciate his paradigm-shifting approach. A noticeable lack is the paltry reference to the extensive discussion of this subject in Chabad Chasidut, which moves past the paradigm of mashpia and mekabel as dominant and submissive roles, emphasizing not just that “someone needs to be willing to be the mekabel” but that both roles are subsumed by a higher allegiance to truth. She notes, for example, in a singular reference to the work of R. Shneur Zalman of Liadi (ch. 17) that while in this world, the voice of the bride does not have full expression and thus is muted under the chuppah, in the Messianic era, the bride will be in her element, “a world of equality, of oneness, and unity—of true love. The male is a stranger to this world of unity . . . ” (p. 127). Chasidic sources elaborate on this, pointing out that both man and woman stand beneath the chuppah—but it is the woman, who is not distracted by an active role, who is more aware of this overarching truth, and so her perspective is the one that is highlighted in a perfected world.

The book tends to be inconsistent in voice. Many subtle concepts are sensitively outlined in a manner that is nuanced and elegant. These passages are jarringly juxtaposed with cutesy section headings (e.g. , in describing how the mekabel elicits the depth for the mashpia, the heading are termed: The Vacuum Cleaner Stage, The Create-A-Flow Stage, and The Vitality and Flow Stage; Part V, titled “It’s a Man’s World [But It Should Be a Woman’s],” includes a chapter called “The View from the Bottom of the Stack”). In addition, there are too many quotes from wide variety of tangentially related secular sources. It would be fine if these sources were analyzed in a methodical way, either to draw parallels or to point out differences, but the sense one gets is that these brief snippets are cherry-picked in a way that ignores their full context.

The thesis of the book is least convincing when it attempts to “explain” contemporary society, why women get the short end of the stick, and why this is an inevitable prelude to the messianic age. The societal “truths” she describes are often platitudes—far less exciting than the complex interplay she describes when outlining the mashpia/mekabel paradigm.

Her presentation also falters when she attempts to justify a long list of halakhic distinctions between men and women, such as the institution of yibum, the process of Jewish divorce, and the differing relationship to Torah study (Part VI). While a number of of the approaches are creative and edifying applications of the mashpia/mekabel principle (and perhaps insights that the reader might have arrived at independently), the effect of providing the “answers to everything” in one fell swoop is aptly described by Kosman herself when she points out the need for the mashpia to have restraint.

Still, despite the occasional lapses, Kosman’s book breaks new ground by providing a truly refreshing English language approach to gender and Judaism. Kosman pushes the reader to think differently about what it is to be male or female, and how the chasms in perspective can be bridged. Even one who has encountered the idea of mashpia and mekabel before is sure to find new and interesting applications.

Chana Silberstein Phd. is educational director at Chabad at Cornell and curriculum specialist for the Rohr Jewish Learning Institute.