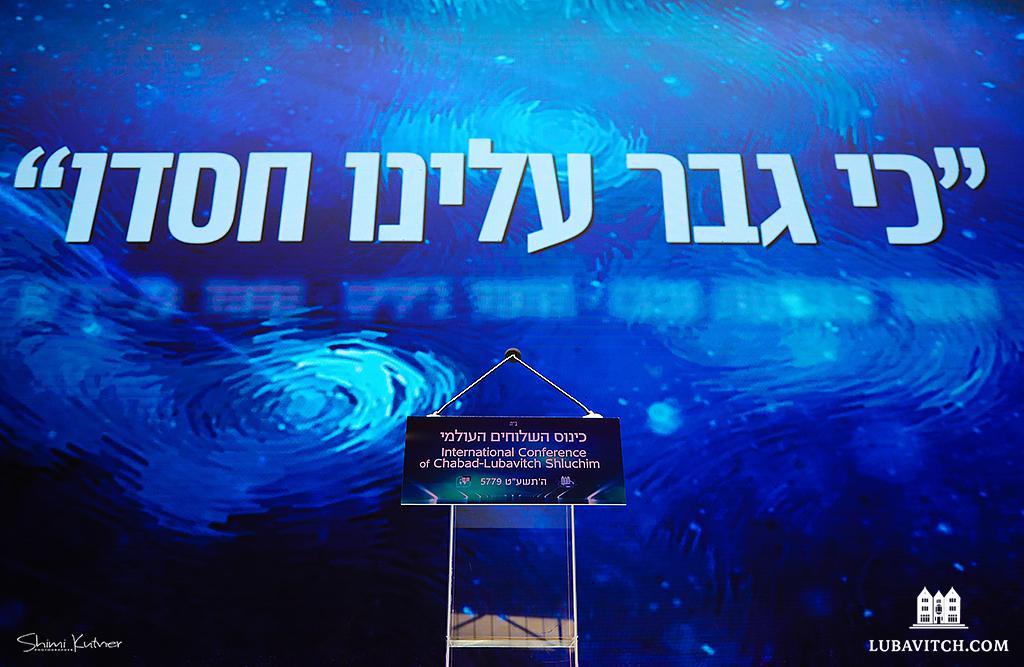 Podium at the Gala Banquet of the International Conference of Chabad Emissaries 5779 in New York
Photo Credit: Shimi Kutner

“Unbelievable to be at the world’s largest kosher dinner,” tweeted Michael Snow, Director of Jewish Affairs for NY Governor Andrew Cuomo. And as #kinus (conference [Hebrew]), trended on twitter, some 5,600 attended the annual Gala Banquet of the International Conference of Chabad Rabbis, last night.

They were rabbis and donors, army chaplains and public officials who came from big cities and small towns around the world. Consul General of Israel in New York, Dani Dayan, Director of the Jewish Agency for Israel, Mr Yitzchak Herzog, and Birthright co-founder, Michael Steinhardt were a few on a long list of Jewish personalities who participated. Mr George Rohr of the Rohr Family Foundation got a birds-eye view of the vast Chabad machine he helped build. “In this room we see the face of World Jewry represented,” said Rabbi Moshe Kotlarsky, vice chairman of Merkos L’Inyonei Chinuch and emcee of the evening.

Chairman of Merkos L’inyonei Chinuch, Rabbi Yehuda Krinsky, greeted banquet attendees via a video link. He noted how in times of trouble, people will often look to their nearest Chabad for support. “When tragedy struck last week in Pittsburgh, we saw you shluchim, spring into action, each in your own unique way.”

The banquet concluded a five-day conference with workshops and networking events conducted in English, Spanish, Hebrew and Yiddish, held at different venues in Brooklyn and Long Island.

There were moments of emotion, such as when Rabbi Yisroel Rosenfeld, Regional Director of Chabad of Pittsburgh led a mishna study in memory of the eleven souls murdered at the Tree of Life Synagogue last week. And moments of levity, like when Rabbi Motti Flikshtein of Wilmington, Delaware, rapped from the podium about his journey from a life “on the streets, running with the wrong crowd,” to the life of a Chabad rabbi.

“It all started with a warm embrace, from a rabbi, who I was sure would critique me,” he shared. “And now, I channel the warmth of my hug to the members of my community,” he continued, before introducing a protege, young Zach Horowitz who once considered himself an atheist and is now studying for the rabbinate.

Milan representative, Rabbi Moshe Lazar, who escaped Austria as the Nazis rose to power, danced with tens of his descendants, evoking a moment of poignance. “They are building, what Hitler sought to destroy, as Chabad emissaries all over,” he said with pride.

Representing Chabad’s partners, Mr Yitzchak Mirashvili, of the Meromim Foundation, a fund that has generously supported Chabad initiatives over the past few years, delivered the keynote address. “The Rebbe wanted everyone to have skin in the game,” he said as he spoke of his gratitude “for the opportunity to partner in the Rebbe’s work.”

At a rousing roll call, during which representatives of each country were called to stand and be recognized, a new Chabad was announced for the Ivory Coast. As the evening closed, more than five thousand joined hands, dancing as one unit. “It was,” tweeted one participant, “a moment of joy that will spread to the entire world.”