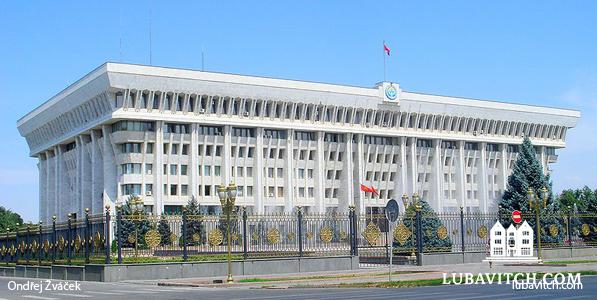 Violence erupted in the nation’s capital after police opened fire on those protesting the victory of incumbent President Kurmanbek Bakiyev. Accusations of corruption and government censorship were leveled against Bakiyev and his party after the recent election. Rioters stormed the presidential palace and violent clashes left 81 people dead.

With President Bakiyev now out of the capital, a sense of order is returning as former foreign minister and opposition leader Roza Otunbayeva presides over a newly formed transitional government for the next six months.

Kyrgyzstan’s tiny Jewish population, concentrated in the nation’s capital, is mostly comprised of descendants of Eastern European and Bukharin Jews who relocated during the Second World War and Soviet Regime. They number only 1500 individuals in a country of 5.5 million.

After the fall of the Soviet Union, many of the nation’s Jews emigrated to either Israel or America. A large portion of those who stayed behind are mostly impoverished and now dependent on community welfare. Three-quarters of the local population is Muslim, yet Kyrgyzstan has little history of anti-Semitism, despite Soviet hostilities and Stalin’s anti-religious raids.

Raichman lives in Bishkek with his wife Esther and their four children. The family has been serving the Jewish community here since 2002. Rabbi Raichman points out that the protests are essentially political and that while it is important that residents and tourists exercise caution, there is no reason to suspect “any direct danger” to the Jewish community.

During the so-called 2005 Tulip Revolution that put the then-popular Bakiyev in power, there were few problems for the Jewish community. As an act of precaution, however, Raichmen has closed the community’s Ohr Avner school, that had just reopened after the Passover holiday, so that its 80 students could stay home.

The Israel Broadcasting Authority reported earlier that 20 Israeli citizens are currently believed to be at large in Kyrgyzstan. Israel, which does not maintain a consulate in Kyrgyzstan, urges its citizens to try to make contact with the embassy in neighboring Uzbekistan. In an interview with Lubavitch.com, Raichmen stated that a portion of the Israelis have made contact with him, and that efforts are being made to reach out to others.

Despite tensions, Raichmen remains hopeful that order will soon return and that Jewish awareness will continue to grow. This year’s Passover seders conducted in Bishkek attracted over 300 people, and plans are still underway for continued programming throughout the year.

“We ask that everyone keep the people of Kyrgyzstan in their prayers,” Raichmen says. “While we remain cautious, with the help of G-d, peace will soon be restored and life will return to normal.”