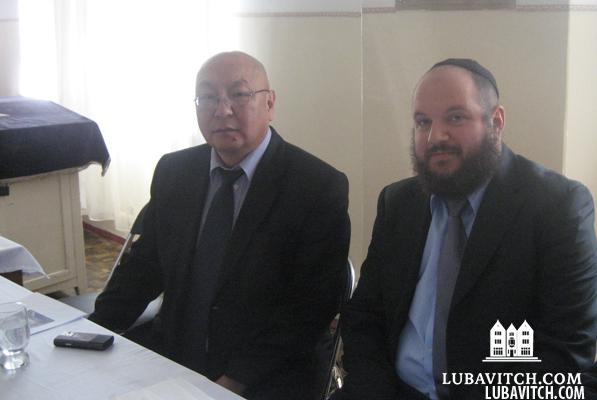 Emilbek Kaptagaev, Head of the Presidential Administration, at the Jewish community synagogue with Rabbi Aryeh Raichman.

(lubavitch.com) On Tuesday, September 21st, Emilbek Kaptagaev, Head of the Presidential Administration, visited the Jewish community synagogue in the capitol city of Bishkek, where he met with Rabbi Aryeh Raichman, Chabad representative to the city.

The meeting came as a result of growing concerns among Jewish leaders after a bomb filled with nails was thrown into the community synagogue on September 9th, the first day of the Jewish New Year. The synagogue was empty at the time of the attack and no one was injured. This is the second attack on the synagogue since April.

Following the incident, Rabbi Raichman told lubavitch.com that he sent a letter to President Roza Otunbaeva asking her to investigate the matter with urgency.

Kaptagaevr, on behalf of the president, gave his assurance that security for the Jewish Community is a priority

The president, who is in New York attending the UN summit, met Monday with Rabbi Abraham Berkowitz of Lubavitch World Headquarters, and informed him about the Chief of administration’s scheduled visit.

The president confirmed that she read Rabbi Raichman’s letter, and “promised appropriate security for the Jewish community,” said Berkowitz