Jews Concerned, Not Intimidated By Vandalism at Jewish Cemetery in Salonica 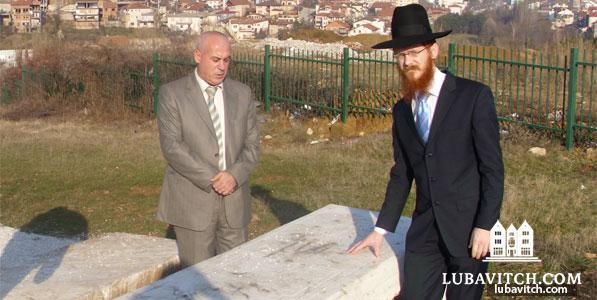 (lubavitch.com) Chabad representative to Salonica said he refuses to become intimidated after vandals desecrated the city’s Jewish cemetery, spraying anti-Semitic graffiti on headstones and the cemetery’s walls on Friday.

“The Jews of Salonica, like Jews worldwide, are concerned about the surge in neo-Nazism and anti-Semitism everywhere,” said Rabbi Yoel Kaplan. “But we will continue to do our work with pride, without fear.”

Three suspects were arrested on Saturday, and are being investigated for links to extremist groups.

In a letter to Greek Prime Minister George Papanderou, Dr. Shimon Samuels, the Wiesenthal Center’s director for international relations, expressed revulsion for the desecration, and called on the Greek government to take strong measures against anti-Semitism.

“One can but note the timing that coincides with the Greek financial meltdown.”

“It is time to advise the Greek people that your national economic crisis is a result of their own profligacy and not a Jewish conspiracy. It is time for a zero-tolerance policy for anti-Semitism and other forms of hate,” the letter continued.

Following the arrest, the Greek government issued a stern condemnation of the incident, saying:

“The government unequivocally condemns the vandalisms at the Jewish cemetery of Thessaloniki. Such instances of racism and hate have no place whatever in Greek society, which stands opposed to such acts of violence and chauvinism. The responsible authorities will do whatever is necessary so that the perpetrators of these acts are led, as soon as possible, before justice,” government spokesman George Petalotis underlined.