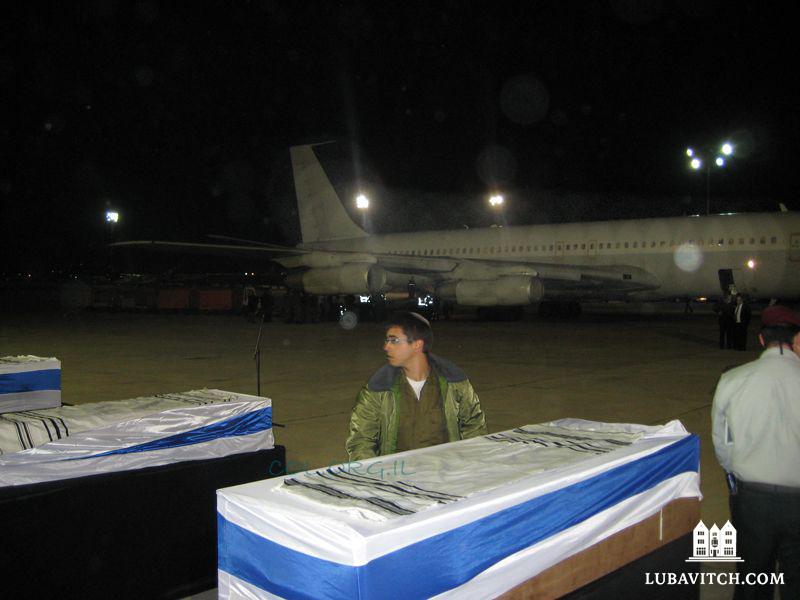 (lubavitch.com) The IAF plane carrying the remains of the six Jews murdered in Mumbai landed at an army near Ben Gurion airport in Israel at 11:30 Monday night for a private State ceremony.

Six blue and white draped coffins, with a tallit upon each, were carried out in silence onto the tarmac.

Family members soon broke the stillness as they cried over their loved ones. "It was heartwrenching," said Rabbi Yehuda Krinsky, Chairman of the Chabad-Lubavitch educational and social divisions who was there.

There were no eulogies, but the intimate ceremony gave the families a chance to express their pent-up grief here, the first opportunity they had to utter their final words to their sons and daughters and beloved family members.

Several Knesset members, the Gerer Rebbe, Rabbi Yaakov Alter, members of Zaka, and other notables made were among the small number of people permitted to participate.

The coffins were then loaded individually, into six vans. The bodies of Gavriel and Rivka Holtzberg were taken to Kfar Chabad, where the funeral is scheduled to begin Tuesday, at 1:00 p.m. and continue to Jerusalem. The couple will be buried on Mt. of Olives.