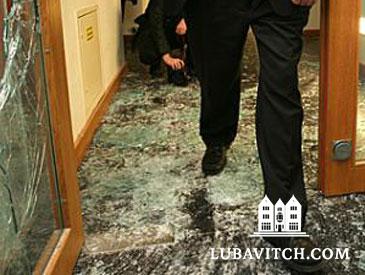 Police arrested a man suspected of causing widespread damage by smashing windows and other glass surfaces at a Jewish school in Vienna early Sunday using an iron rod, a spokesman said.

The man’s motive was not immediately clear. He was refusing to answer questions, police spokesman Herbert Hutter said.

The Austria Press Agency cited Chabad’s Rabbi Jacob Biderman, head of the school’s administration, as saying that the man told the police officers who arrested him that his name was Adolf Hitler.

The school, which has 360 pupils from kindergarten to high school-age, was unoccupied and unguarded in Sunday’s early hours. A police spokesman said the man was detained at the scene after residents nearby called in noise complaints to police.

Jewish community leaders denounced the vandalism of a Jewish school as the worst anti-Semitic incident in Austria for two decades and showed reporters a trail of destruction on all three floors of the Lauder Chabad School in the capital Vienna.

Jewish community leader Ariel Muzicant said the incident could not be likened to arson attacks on synagogues in France in recent years or the 1938 "Kristallnacht" (Night of Shattering Glass) pogrom against Jews in Nazi Germany.

"I don’t want to create the impression that Jews face once again being beaten on the streets of Austria," he said amidst heaps of glass shards including from a display case whose sports trophies lay on the floor, misshapen from heavy blows.

"This is an act of vandalism, it’s not a tragedy. Nothing was burned down, no one was hurt. We don’t know whether this was the act of a mentally ill person or an (organized) political act. We must avoid making generalizations," he told reporters.

"However, it is no doubt an anti-Semitic act, done out of rage and hatred. It’s very disturbing. But we will not be intimidated," Muzicant added, saying he hoped the incident would spur efforts to improve public education against bigotry.

Rabbi Biderman said classes would resume on Monday after a cleanup.

Colorful paintings and drawings by schoolchildren were left untouched, and no swastikas or anti-Semitic graffiti were found.

Muzicant said the last serious anti-Semitic attack in Austria was in the mid-1980s when a number of gravestones were desecrated by neo-Nazis.

Austria’s small Jewish community leads a generally well integrated life, although its schools in Vienna have police guards when classes are in session.

There are two small, far-right parties in Austria’s parliament who deny periodic accusations that some members harbor neo-Nazi sympathies.