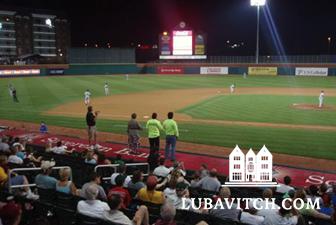 A first-ever kosher food concession at the Merchantsauto.com Stadium, in Manchester, New Hampshire, supervised by Chabad, served kosher hot dogs, hamburgers, falafel and other goodies to a cheering crowd of 500 Jewish children and adults.

Before the opening pitch, the Chabad Tefillin Booth was mobbed with boys and men waiting their turn to don the phylacteries—a first for many of them—and who stayed for the Mincha prayers. The 7th inning stretch lasted just long enough for the Maariv (evening prayers) to be recited with a minyan.

The stadium, along the banks of the Merrimack River, was filled with the sound of Jewish music and the sight of dozens of swirling Israeli flags and hundreds of kids sporting colorful t-shirts, emblazoned with the names of the area’s Jewish camps, buying and trading Israeli baseball cards.

“There was such a palpable feeling of Jewish pride in the air,” said Rabbi Levi Krinsky, director of Chabad of New Hampshire.

“Jewish overnight camps and individuals came from all over the state and as far as Boston to attend. People just got caught up in the idea of a kosher night at the ballgame."

The program, sponsored by Camp Gan Israel and the New Hampshire Fisher Cats, the AA affiliate for Major League Baseball's Toronto Blue Jays, also attracted the attention of our local WGIR radio station, which aired an interview with Rabbi Krinsky about the event and about Chabad in general.

Krinsky told Lubavitch.com that the catalyst for this event was a trip to the stadium he took with his family two Passovers ago. They were stopped at the gate because they were toting matzah sandwiches for lunch and there is a no-food restriction at the ballpark. “I explained that it was a holiday and this was the only food we could eat” he says “so they made an exception for us and let us in.”

To Rabbi Krinsky’s surprise, during the game he gets a tap on the shoulder from a gentleman who introduced himself as the catering manager for the stadium. “He wanted to know how they could avoid a situation like this in the future and he was very interested in the details of keeping kosher.”

A meeting ensued between the two and they brainstormed for ways to bring kosher food to the Fisher Cats fans. It involved a full time mashgiach (supervisor), much koshering of pots, pans and fryalators and good old fashioned hard work, but the rabbi and his staff knew it was all worthwhile.

“Who could predict that a few broken pieces of Matzah two years ago could lead to this wonderful evening of Jewish pride” said Rabbi Krinsky. “It was definitely "bashert"(ordained).”

Stephen Singer, the president of Merchants Automotive Group in New Hampshire and the chairman of Jewish Pride Night said that the event “exceeded all of our expectations in every sense of the word.  Who would believe that in Manchester, New Hampshire, 500 people would eat kosher food, hear Jewish music and put on tefillin at a baseball game?”

Singer hopes that next year’s event will be bigger and better, with double the crowd. In the meantime, he’s looking for someone to sing “Take me out to the Ballgame” in Hebrew.