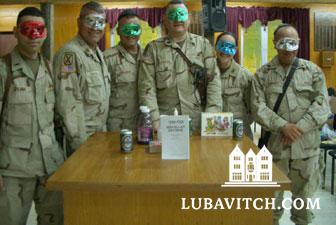 Out of sight, out of mind . . . When Jewish holidays come around, it’s easy to forget those who, for whatever reason, are beyond the general community. Sometimes, they are remembered by token gestures. Oftentimes, they are baited by proselytizing groups. One Jewish organization is in full gear now to make sure that come Purim and Passover, no Jew is left behind.

As snow drifts pile up on sidewalks and sudden frosts devastate citrus crops, thoughts of the springtime’s Passover celebration may be far from the minds of most. But they top the agenda of the Aleph Institute. The twenty-five year old organization, founded by Rabbi Sholom D. Lipskar at the behest of the Lubavitcher Rebbe, Rabbi Menachem M. Schneerson, specializes in bringing Judaism’s essential elements to overlooked Jews in the armed services and forgotten Jews in US prisons.

A lot of advanced planning and piles of paperwork go into serving those special populations so distant from major Jewish communities, and so mired in bureaucracy. Just as Aleph Institute’s Leah Sherman corrals printouts of requests for Passover supplies from military bases and prison chaplains into neat stacks, her email alert pings. Program director Rabbi Menachem Katz forwarded a fresh batch of requests to her inbox. The messages, coming from bases across Iraq, Kuwait, Japan, Italy and a passport-book worth of locations, must be translated into orders, addresses checked. US troop number escalations in Iraq and Afghanistan over the past three years have doubled the number of holiday item requests to Aleph. Last year, Aleph sent 20,000 pounds of Passover essentials – matzah, grape juice, chicken soup, haggadah booklets and more – in 10 UPS trucks to fill 750 military orders.

Last year, the organization pushed the barriers of food shipment when it managed to get chicken soup to Jewish troops last year. “People underestimate the power of a bowl of soup with matza balls sent with love from Jews in Florida to nourish the soul,” said Sherman.
Staff Sergeant Melissa Herron of the US Air Force told Aleph, “I just wanted you to know your gift means more than words can express; more than treats, it is a connection to my people, my faith and my G-d.” Last year “hardly any” supplies for Passover were available from the commissary at Lieutenant (Junior Grade) Tobe Pilato’s base in Yokosuka, Atsugi, Japan. “Had it not been for Chabad we wouldn’t have had any matzah,” he said, which would have been uncomfortable since 70 people showed up for the base’s two Seders. Aleph’s Passover package arrived just in time and there was matzah for all – along with shank bones that had been roasted in Florida and vacuum-packed at Aleph headquarters; a process that fills with office with a roasted marrowbone odor for days.

Before Passover orders can be sent off, though, Aleph has to finish mailing its Purim shipments. Purim, a holiday celebrated in March, arrived in January at Aleph. Boxes piled six high filled with shelf-stable hamentashen, a tri-cornered holiday pastry, crowd the hallways of Aleph Institute’s Surfside, Florida, headquarters, awaiting packaging. Included in this year’s Purim booty are Terra Chips—3,500 bags of these gourmet crisps were donated to Aleph by Irwin Simon and The Hain Celestial Group, Inc.
There’s no rah-rah patriotic glory in Aleph’s equally ardent effort to bring Jewish holiday awareness and meaning to Jews in prison. In 2006, Aleph sent 2,795 Purim packages to 160 U.S. prisons. Volunteer rabbis read the megillah scroll to 650 Jewish inmates. “You are about the only Jewish resource I have access to,” an inmate in Localla, Florida wrote Aleph. “I’ll pray for you.”
Because of the obligation to hear the megillah read “live,” Purim presents a challenge for Jewish prison-outreach groups. Rabbi Binyomin Scheiman, director of Jewish Prisoner Assistance Foundation in Illinois, maintains a non-stop schedule visiting 100 Jewish inmates each month. His monthly visits to Jewish prisoners across the state add 30,000 miles to his car’s odometer each year. He and other area Chabad rabbis will fan out across Illinois to read the megillah in 30 facilities this year. In existence since 1980, the Jewish Prisoner Assistance Foundation, an independent group affiliated with Aleph, has seen the Jewish prisoner count remain stable but, said Rabbi Scheiman, visits and Jewish materials are more important than ever. Missionary groups in present a growing problem. In some prisons, chaplains charged to represent all faiths look the other way or actively seek to convert Jewish inmates. “The inmates are Jewish but their exposure to Yiddishkeit is so limited, I have to be spot on so they do not get turned off from my visit,” he said.
Messianic Christian congregations brag about their progress with Jewish inmates. “Word of Messiah” ministries splashed their website with a note from an inmate who expressed thanks for a Jewish prison library that “keeps getting fuller” with messianic literature from the ministry.
Chaplain Gary Friedman of Jewish Prisoner Services International, an advocacy group for Jewish inmates, said the need to strengthen incarcerated Jews against the torrents of proselytizing forces and against the negative environment in prison is pressing. JPSI maintains a Jewish video-lending library, hosts Jewish marriage seminars for inmates and their spouses, and deals with kosher food issues – a common sticking point for observant inmates. “We work very closely with Aleph and try not to duplicate what they are doing,” said Friedman, whose group also helps coordinates Jewish volunteers of all stripes. “Aleph is extraordinary. It is terrific to have them as a partner in this work,” said Friedman. “When all else fails there is always Chabad.”