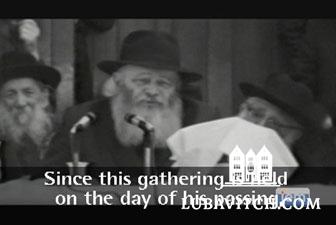 The younger generation of Chabad-Lubavitch representatives barely knew the Lubavitcher Rebbe. In another era, they might have been decidedly impoverished by second-hand recollections as their only means to an appreciation of life in the presence of this spiritual leader.

But a significant portion of the Rebbe’s interface with his Chasidim has been recorded on video, giving viewers an almost immediate experience of the farbrengen, and practically a direct lens onto the Rebbe as he interacted with many who sought him out.

Interest in archival materials relating to the Rebbe generally peaks at this time of year, when Jewish communities worldwide mark the anniversary of his yahrzeit, and ponder his leadership, his life and his legacy.

Scheduled to be released for the yahrzeit, a three-part video takes viewers back in time, to 1972, the mid-point of the Rebbe’s career, as he leads a Chasidic farbrengen. Languishing in a box for 35 years, the fading, barely perceptible magnetic signal was recently restored by Jewish Educational Media, the video archive and production arm of Chabad- Lubavitch.

In this  particular address by the Rebbe, on the twenty-second anniversary of the passing of his predecessor, Rabbi Joseph Isaac Schneersohn, of righteous memory, the Rebbe devotes three segments of his talk to a discourse that declares the world, spiritually speaking, for all its malaise and misery, still "a beautiful garden" if we only learn how to cultivate it.

Recorded on now-antiquated half-inch video, the talks have been translated from the Yiddish, with subtitles in Hebrew, English, Russian, and French, and released on DVD. Like similar audio-visual treasures around the world, the tapes were degraded and totally unplayable. Specialized cleaning equipment, analysis, signal-processing and transfer to a more stable, durable format for production were employed in this project, part of a broader restoration program  by JEM.

With remarkable audio and video clarity, the black and white scenes bring to life words spoken in a different era, but with no less resonance to a contemporary audience . Reliving the life of his own father-in-law and mentor, the Rebbe analyzes the final address – or, in his words, "the last will and testament" of the previous Rebbe.

"The Rebbe taught us that employing technology for the dissemination of Torah values and education is in fact the fulfilment of technology at its ultimate," says Rabbi Elkana Shmotkin, director of JEM.

"A generation ago, a group of visionaries used technology to record the Rebbe's teachings. Further developments in this technology now enable us to preserve and perpetuate his teachings."

The restoration and release of this Farbrengen were made possible by a grant from Yaakov and Karen Cohen of Potomac, Maryland.  The Living Archive restoration, preservation and access effort was initiated through a grant from the Rohr Family Foundation.

More information about The Living Archive Restoration, Preservation, Access project is at www.TheLivingArchive.org