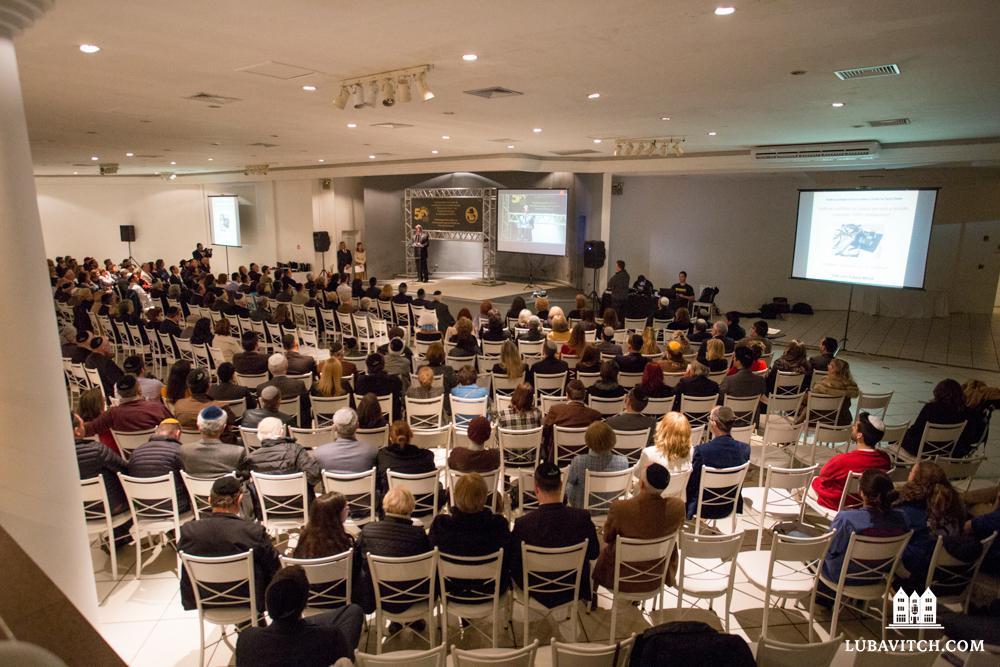 A crowd of 400 gathered to commemorate 50 years since the victory of the Six Day War.
Photo Credit: Courtesy

Nearly 400 members of the Jewish community of Curitiba, Paraná, in South Brazil packed a lavish hall last Monday evening to commemorate the fiftieth anniversary of the victory of the Six Day War and the launching of the Lubavitcher Rebbe’s tefillin campaign.

Organized by Beit Chabad Curitiba representatives Rabbi Yoseph and Tila Dubrawsky, the evening featured a video presentation about the Six Day War, which vividly portrayed the threat against Israel and the Lubavitcher Rebbe’s inspiration and encouragement to Israel’s citizens during the frightening days preceding the war.

Dr. Luiz Fux, minister of the Supreme Federal Court, spoke about his personal connection with the Rebbe. Fux, who carries a photo of the Rebbe with him, shared the deep value he places on the mitzvah of tefillin, which he says enables him to “pursue true justice, time honored values, and ethical decisions.”

One hundred Curitiba residents who had served in the Israeli army were awarded medals for their self-sacrifice. One of the honorees, Mr. Amnon Czerny, shared his memories of serving in Unit 101 together with Arik Sharon and Moshe Dayan during the early years of the IDF.

As the evening came to an end, “adopt a soldier” magnets were distributed to all guests, each magnet bearing the photo of a soldier killed during the Six Day War and a request that the recipient either don tefillin or kindle Shabbat candles in memory of “their” soldier.

“We wanted to ensure that everyone walked out with a commitment to do something positive, in a practical sense,” explained Rabbi Dubrawsky.

To learn more about Chabad in Curitiba, visit www.chabadcuritiba.com.