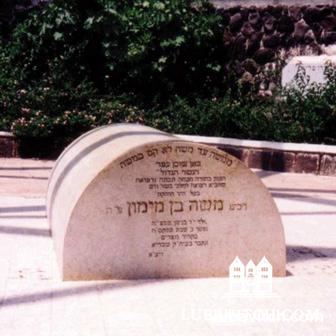 The Tombstone of Moses Maimonides, also known as Rabbi Moshe ben Maimon or the acronym the Rambam

(lubavitch.com) Thousands are expected to converge Wednesday evening at the gravesite of Maimonides in Israel’s northern city of Tiberias to celebrate the completion of the annual study cycle of Maimonides’s (the Rambam) Jewish legal compendium and magnum opus, Mishna Torah.

In 1984, the Lubavitcher Rebbe, Rabbi Menachem Mendel Schneerson, proposed that all Jews commit to a daily study of  Maimonides’s work as a means to Jewish unity.

“Unity among Jews is such an important matter that all efforts must be undertaken to achieve it,” he said at a public gathering announcing the initiative. “Since one of the principal elements in the study of Rambam is the unity of Jewry, as many Jews as possible, men, women and children, should participate.”

Jewish communities worldwide will be celebrating as well. In Tiberias, the ceremony, a joint project of Tzeirei Agudas Chabad in Israel and local Chabad Rabbi Yosef Kramer, begins at the gravesite with the public recitation of psalms and the final chapter of the Mishna Torah, and then its beginning to usher in the 28th cycle.

The event’s second part continues at the nearby Hof HaSheket waterfront hotel with a reception and speeches from rabbis and community leaders about laws in the book, the unifying power in its collective study, and strengthening adherence to the Rebbe’s initiative.

Rabbis, students, Chabad houses and communities from across the country are expected to attend.

The Rambam was one of the greatest Torah scholars of all time, as well as a physician and philosopher. Born in Cordoba, Spain in 1135, he died in Egypt in 1204 and was buried in Tiberias. His Mishna Torah is a summary of the entire Torah and generations of codifications and commentaries. It served as a fore-runner to the modern codification of Jewish Law – Shulchan Aruch.

The celebration marks the completion of the three year track as well.