Jewish by Design: Chabad at FIT 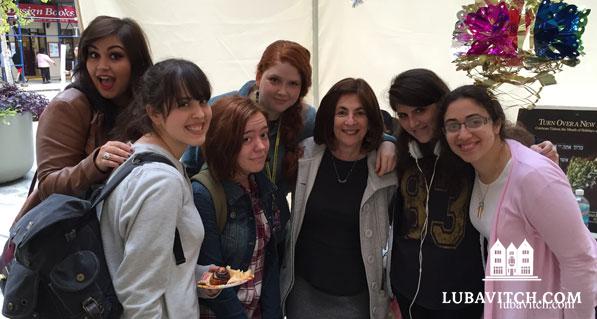 They meet weekly in A320, an unassuming club room at the iconic Fashion Institute of Technology. Students of toy design, fashion, and business, they gather each Tuesday to create something ever more eternal.

It’s Chabad-Jewish Life at FIT Club, the only Jewish organization at this Midtown Manhattan campus, which counts 1200 Jews. The students meet to discuss their studies, relevant Jewish themes, and their personal lives. And they come for the woman at the heart of it all, who travels three hours each day to greet them in her tiny office with a constant supply of food and love.

Malka Werde, a mother and grandmother, brought Chabad to FIT in 2008. “I always felt like this was the most powerful thing I could do,” she reflects. “Young adults are paving the pathway for their entire adulthood. They are open to changes that can potentially affect generations. It’s a very transformative yetand confusing period in life.”

She would know. Werde attended SUNY at Buffalo in 1970. At 18, the Long Island native absorbed in the prevailing counter-culture didn’t want to ever marry or bear children. And then came the Kent State shootings, a watershed moment. An acquaintance from her hometown was killed: the violence of the day, she says, altered her vision of America the great, America the beautiful. “That whole bubble burst for me. I became anti-education, anti-war, and anti-American. I was a complete rebel.”

In 1971, she dropped out of school and out of life as she knew it. Only her backpack remained with her, becoming her sole companion on her world travels. In search of “truth and wisdom,” she ended up on an Israeli kibbutz where she was quickly disenchanted. Israelis were drinking Coca-Cola (“sickening that they were enjoying an American drink”) and the soldiers carried guns on the street (“too militaristic, who needs war?”). She left, preferring the hills of India over the burgeoning Israeli democracy. Just before joining an ashram, she had a personal revelation. “If I was meant to be Hindu or Buddhist, I realized, I would have been born that way.”

Her meager funds long gone, and homesickness setting in, Werde returned to the country she had spurned seven months before. She re-enrolled in Buffalo University signing up for courses in her new interest: religion. One of them would change her life.

Rabbi Nosson Gurary, Chabad’s representative to Buffalo taught an advanced course in Judaism. “I was totally flabbergasted that he was teaching about G-d and souls and reincarnation. At the time I thought it was ironic that I went all the way around the world looking for truth, when really this little black-hatted, bearded man was teaching truth right here.” Operating as a “free agent,” Werde decided to give her native religion a chance, telling herself she could always back out “if it wasn’t for me.”

Trim and chic, the 63-year-old is more mother than contemporary to FIT’s student body, a post her students relish. “She is definitely like a mom to me. She has created a home away from home and a real community for us.” Shira Libhaber met Werde when the former was having a discussion in Hebrew with a friend. Werde overheard and invited her to join an upcoming event. Libhaber, who graduated this past December with a degree in Business Fashion, surprised herself by agreeing.

“Judaism wasn’t something I had considered when looking at schools,” she acknowledges. “And honestly, as an Israeli, I never thought that Chabad would be a part of my life. But,” she concedes, “New York is crazy. FIT is crazy. It’s good to have something that grounds you.” Libhaber served as the club’s president, recruiting students to join holiday programs, Shabbat meals, service opportunities, and the advanced study group, Sinai Scholars. She also helped form Loaves of Love at FIT, where the students bake challah weekly for distribution at a neighboring housing project. She’s still organizing, working on an alumnae reunion.

The programs Werde runs “speak to the Jewish side and the creative side of us,” says Sarah Michelson, an advertising and marketing major. The club is as likely to analyze a Torah class as it is to explore a local museum or mikveh. The sophomore particularly enjoyed a speech Werde coordinated with a Jewish business owner in the fashion industry.

Werde also encourages participation in Chabad on Campus’ national network through the Sinai Scholars Program, Israelinks, and Birthright Israel. Since that first trip to her homeland as a disillusioned teenager, Werde has accompanied 19 Birthright tours. “You would think that FIT is in the middle of a Jewish city, but really the students often feel alienated,” she says. “Meeting others gives them a feeling of connection not only to their campus but to Jewish students around the country.”

Linking people, professionally or socially, is a favorite pastime.

“It’s seriously impossible to find guys on campus,” says Michelson ruefully. With a student body that is 93 percent female, FIT was voted the school most difficult for meeting men. “Malka does her best to help us. She invites them to Shabbat dinners and takes great pride in every relationship she helped start.”

In the last three years, Chabad at FIT (a division of Chabad of Midtown Manhattan) has reached out to students on neighboring campuses, inviting SUNY Maritime, Hunter and Baruch undergraduates for five-course dinners on Friday nights. Inviting their neighbors, Werde enlarges her students’ community in this overwhelming city, and helps them meet Jewish partners. “I aim to strengthen their core Jewish identity, and discuss the idea of Jewish soulmates, more than any negative intervention.”

It helps that she’s a woman, say her students. “A rabbi wouldn’t connect with us as well, we would be a lot less comfortable asking advice and seeking help,” Libhaber states.

Celia Baez has worked in FIT’s Faculty Development Department since 2001. “There was a rabbi here once,” she comments, “but the girls relate better to Malka.” When Werde invited Baez to a class, she “really wasn’t that into it. But I started to go and I love it. I’ve never told her this, but,” she says, using the same words Werde used about the Chabad rabbi at Buffalo State, “she [Werde] has changed my life.”

Making change comes with a price tag that is getting heftier in this most expensive of cities. Responsible for her own fundraising, Werde is struggling. Hosting Shabbat dinners comes at $1,000 a pop, so she has had to scale back to one Friday night a month. Though the club is one of the most active on campus, and enjoys significant membership, it receives little in the way of tangible support from the school’s extra-curricular coffers. But she isn’t planning to give up, only to ask for some outside help.

“My life was transformed from that of a typical American college student to an observant woman. I want to give back in the same way I received.”

To help Chabad of FIT, go to chabadfit.org.