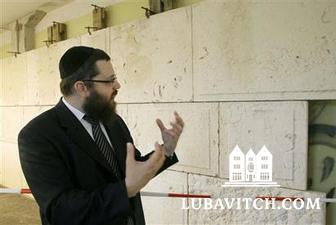 In an interesting architectural improvisation, a precise replica of Jerusalem’s Western Wall is coming to Berlin’s 12,000-member Jewish community. The replica, 100 square meters of imported Jerusalem stone, will be installed in the city’s new $8.2 million Jewish community center.

According to Rabbi Yehuda Teichtal, Chabad representative to Berlin and executive director of the center, the architecture is a reflection of the center’s philosophy that looks to the future while building upon a long tradition.

Teichtal’s observation, and the idea of replicating a remnant wall from ancient Jewish times in an otherwise sleek structure with a blue glass window, calls to mind the post-modern architectural philosophy of liminality, associated with transitional spaces.

The new center’s design is the work of the highly regarded Russian-born, German architect Sergei Tchoban who designed the Berlin Aquadom, one of the world’s most unusual aquariums near Alexander Platz.

The center, already being used,  will be formally dedicated at a ceremony on September 2nd.