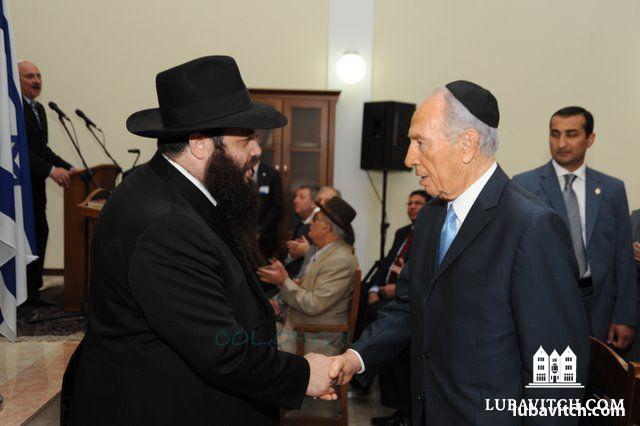 Mr. Peres met with members of Azerbaijan’s Jewish community in the city’s main synagogue where, Mr. Zalmanovitz, head of the Jewish community, and Chabad emissary to Azerbaijan, Rabbi Meir Bruk, presented the President with a gift of a prayer shawl and the Israeli and Azerbaijani flag.

Rabbi Bruk offered words of blessing to Mr. Peres on this diplomatic mission and a prayer for the release of Gilad Shalit.

Accompanied by a delegation including three government ministers and 60 senior Israeli businesspeople, the President arrived in Azerbaijan on Sunday, where he received in a full state military ceremony in the courtyard of the presidential official reception palace.

Azerbaijan’s President Aliev welcomed Israel’s President warmly:  "I am happy to host you in my country. This is a most important visit for Azerbaijan and we are interested in expanding and strengthening the cooperation between Azerbaijan and Israel in the areas of security, diplomacy and the economy."