Israelis From Ica to Spend Shabbat with Chabad in Lima 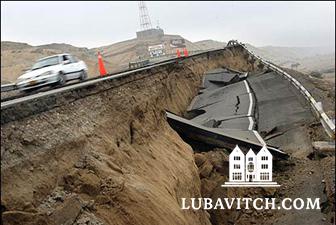 Outside Lima, roads were badly damaged, cutting off many people. Chabad flew a plane out to stranded backpackers and tourists (photo: AFP).

According to the latest reports out of Israel, the last two of the Israelis known to be in the areas affected by Wednesday’s earthquake have finally made contact with their families and are fine. But there are at least 61 Israelis in Peru that have yet to be heard from, and according to some counts, more than 100, some of which are said to be in other parts of the country.

Updated figures for the death toll from Wednesday’s earthquake are now at 510, and Peru’s government has called for three days of national mourning.

Most of the destruction was centered in Peru's southern desert, near Ica and nearby Pisco, about 125 miles southeast of the capital of Lima. The quake was felt as far as Ecuador, Colombia, Brazil and Bolivia.

“Ica is not high on the itinerary of Israeli backpackers,” Mrs. Sara Blumenfeld Chabad representative to Lima, told Lubavitch.com, explaining why the number of Israelis in the area was relatively small.

Though damage in Lima is limited, with frequent electrical outages and many aftershocks, the city’s hospitals are said to be at a breaking point.

Following the 8.0 magnitude earthquake, the Israeli embassy contacted Chabad’s Rabbi Zalman Blumenfeld in an effort to ascertain the whereabouts of Israelis. “Many parents were calling us from Israel,” Sara said. With phone and internet service down or sporadic at best, making contact with Israelis in the affected areas was very difficult. So the Blumenfelds sent two rabbinical students, on hand for the Lubavitch Summer Community Enrichment Program, to Ica, where the quake hit hardest, "to help search for Israeli tourists.”

With roads to Ica impassable, Shneor Feigin and Moshe Kaminetsky boarded a plane for the 20-minute flight. Having been there two weeks ago, the students lost no time locating a large group of Israelis and American tourists who were stranded with no electricity, food or drink. Delighted and relieved by the appearance of Chabad Lubavitch rabbis and the food provisions they brought with them from Lima, the hungry hikers ate by candlelight with gratitude. They will be returning today with 20-30 Israelis who will spend Shabbat at Lima’s Chabad House, as they cannot remain in the area.

“I’ve lived here for 20 years,” said Sara Blumenfeld. “And we have quakes here all the time. But this is by far the worst I’ve ever experienced.