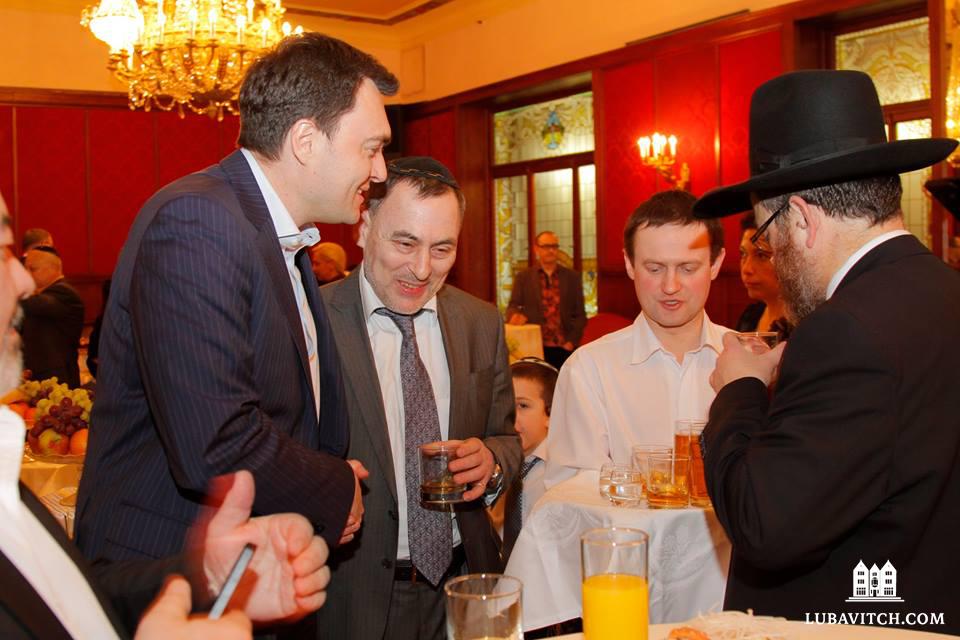 Rabbi Yakov Fridman with guests at the recent celebration

An Israeli community in Moscow?

Unheard of until recently, this vibrant demographic came out to party last week, confirming their place in Moscow’s Jewish community. Hundreds celebrated the 10-year milestone of their expat community that has grown in leaps instead of increments: only a paltry handful several years ago, there are now thousands, and, increasingly, they want to belong, identify and celebrate as Israelis living in the Russian diaspora.

“Just six years ago we barely had a minyan on Shabbos and our Purim party consisted of 15 people,” said Dovi Weintraub, one of the original founding members of the community. “Today there are more than 300 people gathered here!” And there would be more—many remained on the waiting list because of the hall’s limited capacity.

Israeli classics like Am Yisrael Chai played in the background as guests in elegant attire arrived at the Metropol, one of Moscow’s luxury hotels. Working the room greeting diplomats—among them Dorit Golander, Israel’s ambassador to the Russian Federation, business people and professionals was Chabad representative Rabbi Yaakov Fridman, the man behind the whole affair. “Yanky,” as he is affectionately called, made connections among hundreds of Israelis who live locally, cultivating a niche Chabad community in Moscow.

Many who came to Israel from the former USSR during the large wave of immigration of the mid-1990s have moved back to Moscow. Most of them were born in the 1970s and early 1980s and returned to their former stomping ground in the hopes of developing careers and earning high salaries. The Israeli academic degrees and experience in Western-style companies they gained in Israel now make them highly sought after employees in Moscow.

Noticing this distinct trend led Rabbi Berel Lazar, Chief Rabbi of Russia who joined the celebration, to bring Rabbi Fridman out to Moscow to consolidate this unique demographic and address their Jewish needs. His success in doing just that has proven extraordinary.

Israelis warmed quickly to Fridman, himself an Israeli, especially to his energy and warmth. He began by extending invitations to  Shabbat dinners, hoping to bring together like-minded individuals who were possibly feeling a bit displaced as they returned to the Russian diaspora.  Today, the popular Shabbat dinners he leads at the Marina Roscha which regularly draw over 150 guests, are well known, and have become a destination for visiting Israelis.

According to Fridman, some 80,000 people with Israeli passports live in Moscow today. Most, he explained, live in Israel for only a few months, cementing their bond with the Jewish state. The emotional connection has political ramifications as well, as Israelis no longer need a visa to visit Russia and vice versa, making it a popular travel route with up to 60 flights flying Tel Aviv-to-Moscow weekly.

Rabbi Alexander Boroda, Chairman of the Board of the Federation of Jewish Communities of Russia offered greetings. “The Israeli community, and the Israel connection, play a critical role in maintaining a sense of Jewish identity in Russia in general, and specifically in Moscow. 25 years ago many Jews had difficulty celebrating holidays and today, thanks to the work of the community, every Israeli is invited to participate in grand holiday celebrations.

Indeed, among the happy guests were former skeptics once uninterested in identifying with their Jewish heritage. Won over by Fridman’s sincerity and devotion, they’ve become actively engaged in Jewish life, connecting to their heritage through Torah study classes, Jewish observance and a colorful Jewish social scene.

Leon Lenetsky, a staunch supporter of Chabad’s activities, said that the event was a testament to “the eternity of Judaism—a true victory.” He tried to describe his experience that evening but warned that he was “much too biased – I enjoyed myself immensely!”

Ron Yavnai, a radio DJ for the IDF, described the way Chabad took care of each member of the community’s needs no matter how big or small. “There is no other community like this in the world,” he said to resounding applause.