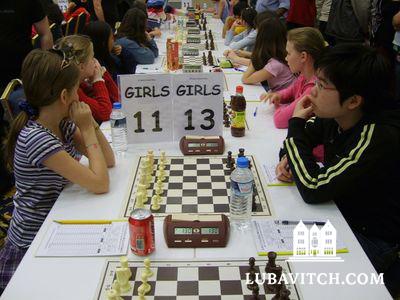 (lubavitch.com) After the trophies and closing ceremonies at last week’s World School Chess Championship in Thessaloniki, Greece, the Israeli and Iranian teams met with their coaches and local Chabad Rabbi Yoel Kaplan to talk chess and peace.

“I was with the kids all week at our center and cheered them on at the tournament,” said Kaplan. “The coach of the Iranian team approached me toward the end of the competition and asked me to help arrange a meeting for his team and the Israeli team.”

“With a lot of excitement,” said Kaplan, Maddahi addressed the group, calling it a great opportunity and a demonstration that kids are above the political issues separating the countries. He spoke in English and Rabbi Kaplan translated.

“I spoke about the coming of Moshiach, and the idea that swords will turn into plowshares,” said Kaplan. “For a week we played together and had chess in common. Similarly, the whole world will be united in the future.”

The championship featured 307 students from 23 countries, and offered divisions for boys and girls that ranged in age from six to seventeen. Israel’s competitors included Michael Gitzman (under 7), Alexander  Zlatin and Daniel Levin (under 9), Tal Levitan (under 11), Matvey Masarsky (under 13), and Leenoy Bass (under 15).

The team joined Rabbi Kaplan and his family every afternoon for kosher meals and programs, including a Shabbat Kiddush luncheon at the synagogue.

“For many of them it was their first experience learning with a rabbi and observing Shabbat. It meant a lot to them having the rabbi cheering them on. At their request, I connected many of them to emissaries in their home towns to keep up the connection,” said Kaplan who opened his Chabad center within the last year.