Inside Chabad: A Big Brother Program To Nurture Children of Shluchim 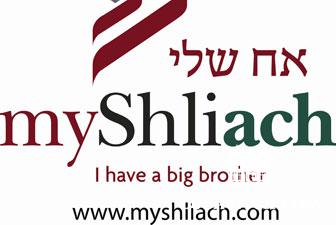 Zevi and Levi Feldman, ages 10 and 12 are brothers. They're also best friends.

The boys live with their parents, Rabbi Mendel and Basya Chana in Halifax, Nova Scotia, a small town of 600 Jews. Apart from their once-a-year visit to New York, where they get together with cousins and family, they don't have much opportunity for socializing.

At a young age Zevi and Levi learned that they live in Nova Scotia for a purpose; the boys identify as Chabad shluchim and help their parents in their outreach activities.

But they're still boys, and they yearn for friends who share their values.

"My sons are home schooled and have little opportunity to socialize," said Rabbi Feldman. "Because of My Shliach, my children now have a friend and a role model to look up to."

The program, made possible with the generous support of the Rohr Family Foundation, pairs the children of Shluchim with older yeshiva students who fill the role of big brother, mentor and friend, serving as an anchor for the children living far from established Jewish communities.

Chabad's resolve to reach out to the nethermost reaches of the world precludes the insular lifestyle adopted by most other Chasidic communities. The motto "to leave no Jew behind" is the impetus that has many a young Chabad-Lubavitch family moving out to spiritual wastelands, where they establish their home and raise their children without the benefit of peers who share their values and lifestyle.

"The Lubavitcher Rebbe spoke often about the importance of 'aseh lekha rav,' as an imperative for every Chabad Chasid and Shliach, whereby they would in essence, choose for themselves a Chasidic mentor," says Rabbi Moshe Kotlarsky, Vice Chairman of the Lubavitch Educational Division.

"Although Shluchim often live far from the hub of the Chabad community, their mentors guide them and are a source of constant inspiration to them."

My Shliach provides the children of Shluchim, like Zevi and Levi, from places like Colombia, Sweden, Amsterdam, British Columbia and Israel with the innumerable benefits of the mentoring system. Geared to boys aged 10 and up, the program is modeled on the Big Brothers Big Sisters of America Program, with an inherent difference:

"Our mentors are not merely taking their 'little brothers' to a baseball game or out for a slice of pizza, says Rabbi Mendy Kotlarsky director of JNet, which develops programs for Shluchim such as My Shliach.

Rather, he explains, they attempt to give these young children a bit of the total immersion Chasidic experience that is hard to achieve outside of the yeshiva world. For the junior Shluchim living in remote areas, the weekly phone call may be their only interface with Chasidim apart from their parents. For others attending a Jewish Day School, the objective may be of a more focused nature.

Children who have spent their elementary years learning in a day school may find the switch to a Lubavitch Yeshiva that primarily concentrates on Talmudic and Chasidic study overwhelming, if they haven't had adequate preparation.

"When my ten year old son Aron attended camp for the first time this year, he was able to plunge into the learning sessions with full understanding of the concepts taught," said Rabbi Yossi Friedman, Chabad representative in Birmingham, Alabama.

"He was able to assimilate well, thanks to his weekly learning session with his mentor. When the time comes for Aron to go to Yeshiva, these learning sessions will have played a crucial role in facilitating his adjustment to Yeshiva."

The success of My Shliach is thanks in large part to the meticulous attention dedicated to recruiting the mentors and creating matches that allow for a blending of personalities. The mentors are selected from a large pool of talented yeshiva students. Their natural sense of dedication, responsibility, and sensitivity is further honed by the ongoing training program developed exclusively for the My Shliach program.

Trained in basic psychology and guided in attaining the listening skills necessary for building a phone relationship, the mentors also maintain steady contact with the director, Rabbi Beryl Frankel, who makes himself available at all times to each of the mentors.

"The training I received allows me to feel confident in my mentoring," says Shmuel Levy, a big brother.

Big brothers also dedicate some of their time to talking with the parents of their little brothers.

"He asked detailed questions about my son's personality, so he could reach him in the most effective manner. He demonstrated a deep understanding of my son and intuitively guided him in a relaxed and informal manner."

My Shliach was established as one way of giving back to these junior Shluchim who give so much of themselves, explained Rabbi Frankel.

The initial pilot program of 50 boys and mentors will expand to an additional 400 boys, and will be launching a similar program for girls, say its coordinators.

Related Articles
View All
Education
Jewish Day Schools Make The Grade
Amid a national discourse about the transformation of America’s school system in the wake of the pandemic, Jewish day schools are enjoying an unexpected boost:…
Education
Ckids International Crowns Australia’s First ‘JEWQ Champion’
Ethan Ickowiz from JEMS Bondi, NSW is the new JEWQ Champion. Ckids International crowned Ethan “Ultimate JewQ champion of Australia” at the JEWQ grand finale…
Education
A Quiet Moment
It is a typical, bustling morning at a middle school in Camarillo, California, and the students are about to take an algebra quiz. But first,…
Education
Remembering Rebbetzin Chana: Jewish Feminine Role Model
Rebbetzin Chana Schneerson, a feminine role model of Jewish activism and proponent of Jewish scholarship, mother of the Lubavitcher Rebbe and wife of Rabbi Levi…
Get Inspiration to your inbox!
Newsletter
Join our weekly newsletter for inspiration and updates
Donate
Find Your Local Chabad Center
Subscribe
|
Log In
Chabad
About Chabad-Lubavitch
About Chabad Lubavitch
The Rebbe
Headquarters
Magazine
Magazine
News
News & Updates
In The Media
Impact
Social and Humanitarian
Social and Humanitarian
Education
Education
Community
Community