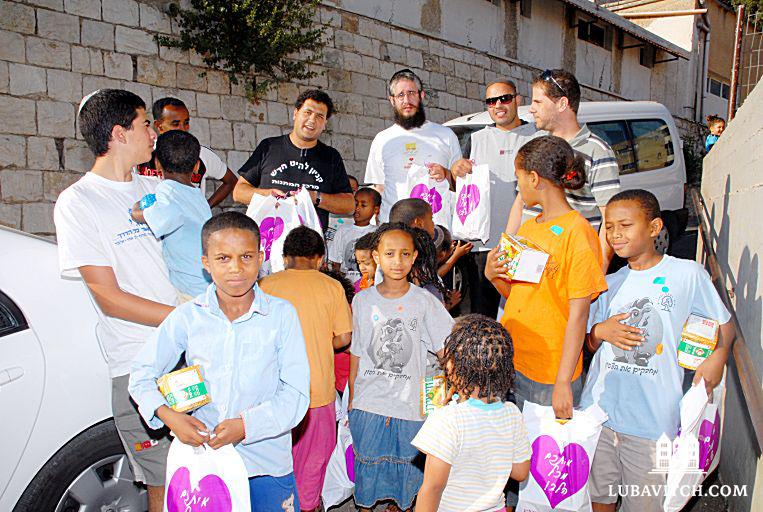 Michal and Levie, a young couple living in Safed, Israel, were on the brink of despair. With absolutely no money to support themselves and their young children, the strain was taking an emotional toll that they feared would tear their family apart.

“It was the hardest time in my life,” Michal, 41, says, recalling the first time, several years back, when she walked into the offices of Chasdei Lev, a social organization in Safed.

Founded in 2002, in memory of Rabbi Levi Bistritzky—the city’s late chief rabbi, Chasdei Lev began in a small warehouse where families in need were invited to come pick up basic food staples. It has since turned into a multifaceted center to assist impoverished families get onto a financially stable track.

“The Upper Galilee, comprising of the most Northern cities of Israel, is one of the most impoverished regions in Israel. In 2013, 30 percent of Safed’s 35,000 families were living below the poverty line.

“Even with both husband and wife working, if they receive minimum wage, they could be falling behind in their monthly payments,” says Zalmi Bistritzky, director of Chasdei Lev, who launched Mishpacha Beplus, Hebrew for “Family In the Black,” under Chasdei Lev.

When a family is struggling to put food on the table, the stress often cuts into the fabric of the whole family life, threatening to unravel it. “Everything hit us together; we had grave financial issues, I had a feud with my parents which broke me down emotionally and I was studying but had no income,” says Michal. “Without funds to pay bills and no emotional support, we just couldn’t continue.”

Her husband, Levie, says that it was even more difficult, because his wife wanted to continue to live a middle-class lifestyle. “I knew that through her studies we would need to tighten our belts, but she would not come to terms with depriving the children of what she felt they should have.”

With professional guidance, the organization built a four-pronged strategy: stabilize the home situation; pull families out of the negative bank account; find them employment, or better employment, and then teach them to budget, balance and manage their finances while building a savings account.

Meirav Spiegler-Sians, a certified social worker and family financial coach, is director of Mishpacha Beplus. “We tell those who come to us that ultimately they are the ones who pull the strings in their lives.”

A first step towards wholesome change, she says, is for the individual to commit to pulling oneself up by the bootstraps and over the poverty line. Michal and Levie made that decision and Chasdei Lev worked closely with them, providing them the tools to move ahead on their path to socio-economic recovery.

“We understand that there is a connection between work and poverty, however, there are many more variables to poverty,” says Amit Granek, deputy general manager for strategy in the office of the city’s mayor. “Chasdei Lev understands the complex issues of poverty and has been at the forefront, strategically combatting this issue in the city.”

Helilie Lahav, an educator and couples therapist worked with Michal on behalf of Chasdei Lev, to set priorities and helping her gain the emotional stability to address her challenges constructively. Over a two month period, Michal learned how to deal with the family crisis, made progress towards completing her degree, and with help in developing her resume she found a part time job. With the organization’s assistance, Levie landed a better job, taking away more than three times the monthly paycheck he had previously received.

Today through its various divisions and 25 employees, the organization assists some three thousand families a year.

Mishpacha Beplus, which is funded by private donations and grants from businesses, is working with 120 families at present. Some two dozen families have graduated its program, which Amit Granek says has helped many adults enter the workplace for the first time, and is making a dent. Safed’s statistics on poverty show a decrease by 20% over recent years, and city official give much of the credit to Chasdei Lev.

Granek has observed Zalmi Bistritsky build the organization from a food provider into a force for real change in the Safed community that is helping families help themselves with dignity and resilience. “He understands the issues, but it all comes from a deep place of caring, of giving to others,” she says.

Yehudah Israeli, with an MBA, is a financial coach for the organization who describes Chasdei Lev as providing a much needed answer to people who need much more than a basket of food. “People who come here are quite often in very fragile situations. They need to feel good about themselves throughout the process, and we need to be there to encourage small steps to help them set and meet their goals so that they can realize their personal dreams.”