In the Suburbs of Sao Paulo: A Jewish Community Opens a Synagogue

The growing, young community in Alto de Pinheiro in their new sanctuary

All News
By Dvora Lakein , Brazil

It’s an area known for its top-tier schools and pricey real estate, but not so much for its Judaism. Still, now that Alto de Pinheiro’s first permanent Chabad Jewish Center has opened its doors, that may be changing.

This ritzy S. Paulo suburb is home to one thousand Jewish families. Since 2005, Rabbi Eliyahu and Rivky Rosenfeld have been holding services, running a Hebrew school, and teaching classes in a small rented home here. The people were interested; the leaders passionate. But their success quickly became their greatest obstacle: there simply wasn’t enough room.

The High Holidays saw five hundred people squeezing into a place fit for two hundred. The synagogue’s single room could not accommodate services and the subsequent meals. Waiting lists for admission to the Hebrew School and children’s programming were growing, with no space for those programs to expand. The temporary location butted up against zoning requirements as Chabad negotiated legal issues and hefty fines.

Clearly, it was time to lay down solid roots. A steering committee began searching for a place to call home, and in 2014, they purchased a shopping complex that was in development.

Four years later, the five-story, ten-thousand-square-foot structure is now open for business. A climbing tree graces the ark situated at the front of the synagogue. Along the courtyard’s stone wall, another tree ascends towards the open sky. Outside the sanctuary is a beautiful atrium where people gather to talk, study, and work together. Meanwhile, the sanctuary itself is packed every Friday night as new couples pop in to check out the modern building. And children are everywhere, learning and playing. The community is alive and growing in all respects.

“Everything has expanded since our new building opened,” Rosenfeld says. “Everything. The people here took this project on as their own. Our community owns it.”

Mario Eduardo Gorski, a local restaurateur and a friend of the rabbi, isn’t a frequent shul attendee, but he felt strongly that the neighborhood needed its own Jewish center. Using his know-how as a chemical engineer and business owner, Gorski dedicated years to the building’s construction. 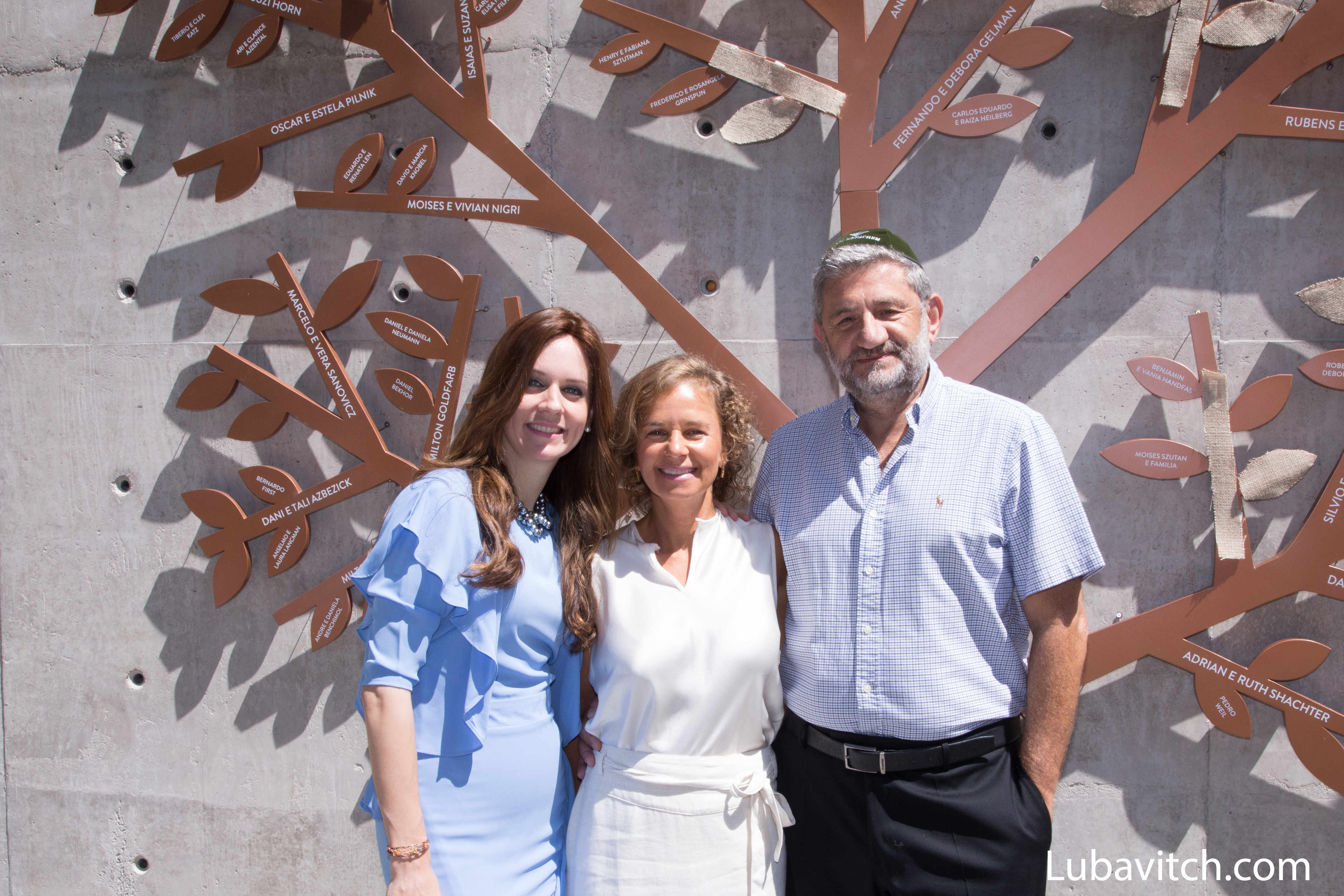 Rivky Rosenfeld and supporters standing before the “Tree of Life”

“This is a congregation of spirituality, comfortable adornments, and modern architecture,” Gorski says. “I believe that people are looking for places where they can have full experiences. It is essential for the spiritual and the comfortable to go together.”

Rivky, a second generation S. Paulo Chabad representative, says that many women visit the building even though they don’t connect with prayer or believe they’d fit in at an Orthodox center. “We offer an intensive weekly Torah study class, a challah-for-charity baking session twice a month, and professional cooking classes. There’s something for everyone, whether it’s spiritual, social, or intellectual.”

Many of the women were introduced to this specialty programming through their children. The Rosenfelds put a lot of emphasis on engaging local youth whose parents moved here to take advantage of the many high-achieving private schools in the area. Some fifteen teens meet the rabbi for a weekly lunch-and-learn where all topics are on the table. During Friday evening services, a concurrent children’s program entertains thirty children. And the center’s Beit Yeladim has become the go-to Jewish after-school program in the neighborhood. (It is one of the many Chabad after-school programs–see It Ain’t Your Parents’ Hebrew School, page 22). Kids come straight from school to hang out on the rooftop playground and get their weekly dose of Judaism. They come early and stay late while their parents chat over coffee on the first floor.

Eight-year-old David Wulkan recently received a medal for completing his first Aleph-Bet book at Beit Yeladim. His mother, Patricia, a businesswoman raising two children, says, “I think it’s awesome that my kids are getting such a strong Jewish education. I believe they need to know these things. They should be confident enough to open a siddur at the synagogue when they’re older.”

One Monday, after her car was totaled, Wulkan had to tell her children that they wouldn’t make it to Hebrew School that day. “My kids were really upset,” she says. “They really love going.” So do the school’s other kids. Enrollment, which started with five children, is at forty this year. “And not one kid dropped out from last year,” Patricia notes proudly. “That tells you something.”

Dani Ajbeszyc brings his three kids for services every week. The forty-five-year-old CFO of a global real estate firm helped get Chabad’s new building project rolling financially and strategically. “The atmosphere here is fantastic,” he says. “The new building is much more visible. It’s attracting Jewish families from the region who never knew a Chabad synagogue was around. It was a long journey to realize this dream, but we are very happy to have arrived.”

When he was a child, Nelson Kagan’s family opened a synagogue in the city where they lived. But the university professor admits that as a young adult, “Judaism was not a big part of my life.” Following a decade of marriage in which Nelson and his wife, Sarah, were unable to have children, she encouraged him to get more involved in the Jewish community. He began attending services at Chabad’s then-modest rental, and soon built a sukkah for the community. He felt truly blessed when his wife became pregnant soon after. “My life changed after joining Chabad.”

That was ten years ago. Every autumn, the community still gathers in his homemade sukkah.

Ever the builder, Kagan joined forces to help erect Chabad’s new home. “The rabbi raised the money and involved the whole community in the process,” he says. “He gave everyone a job, whether it was giving time, or money, or expertise.”

“Young people are bringing their families to show them what they built,” the rabbi shares. “They made history and are so proud of what we accomplished. And that is priceless.” 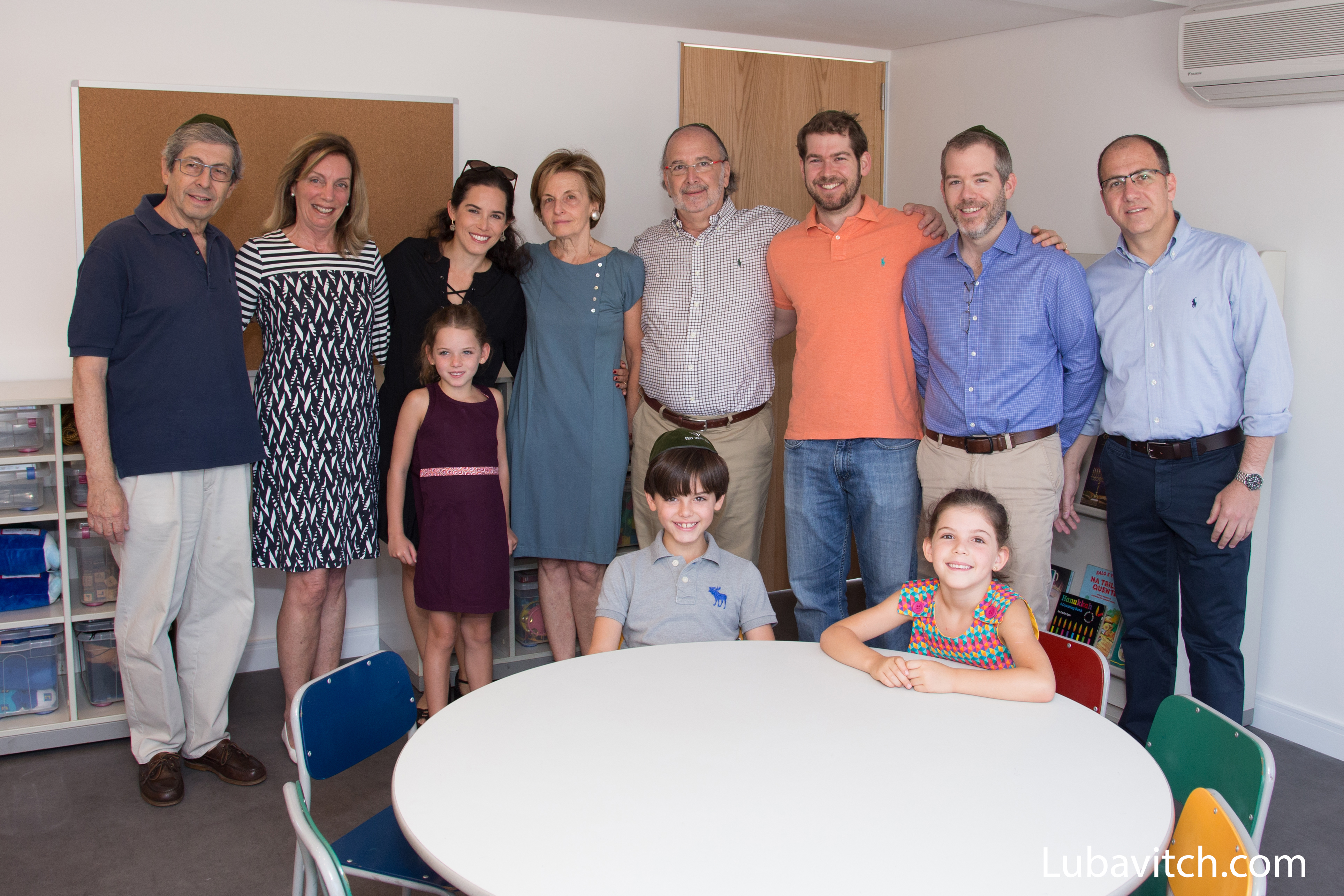 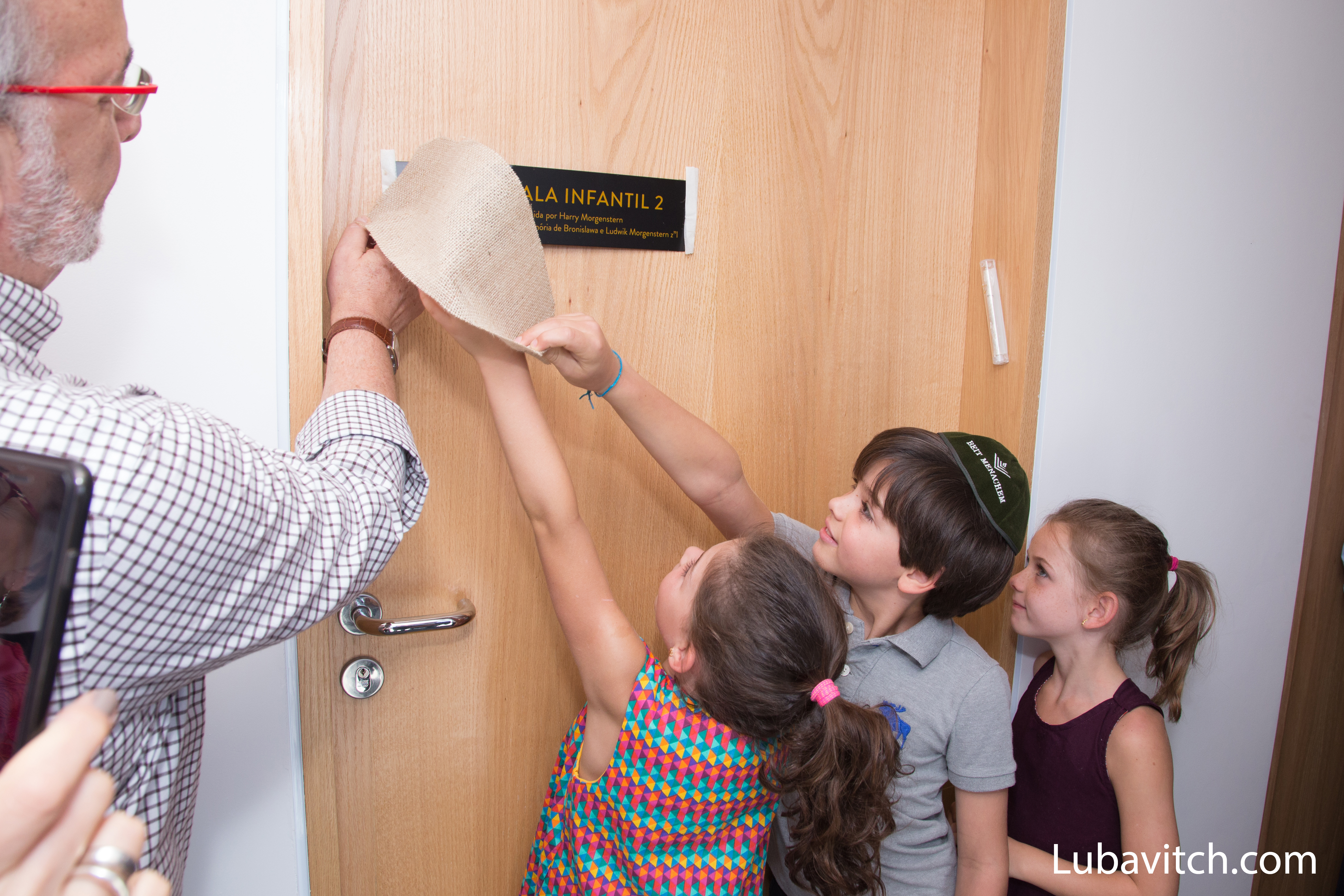 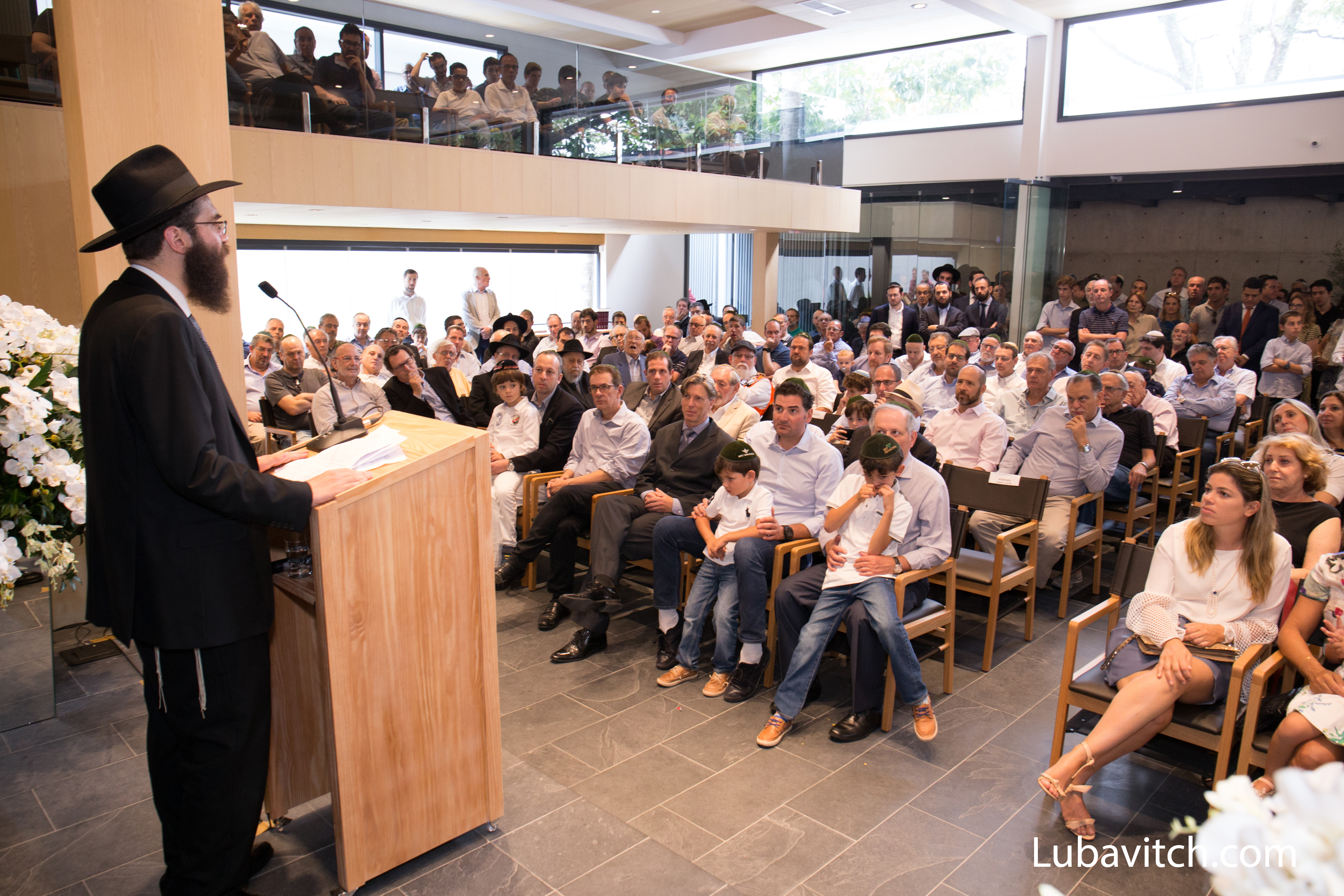 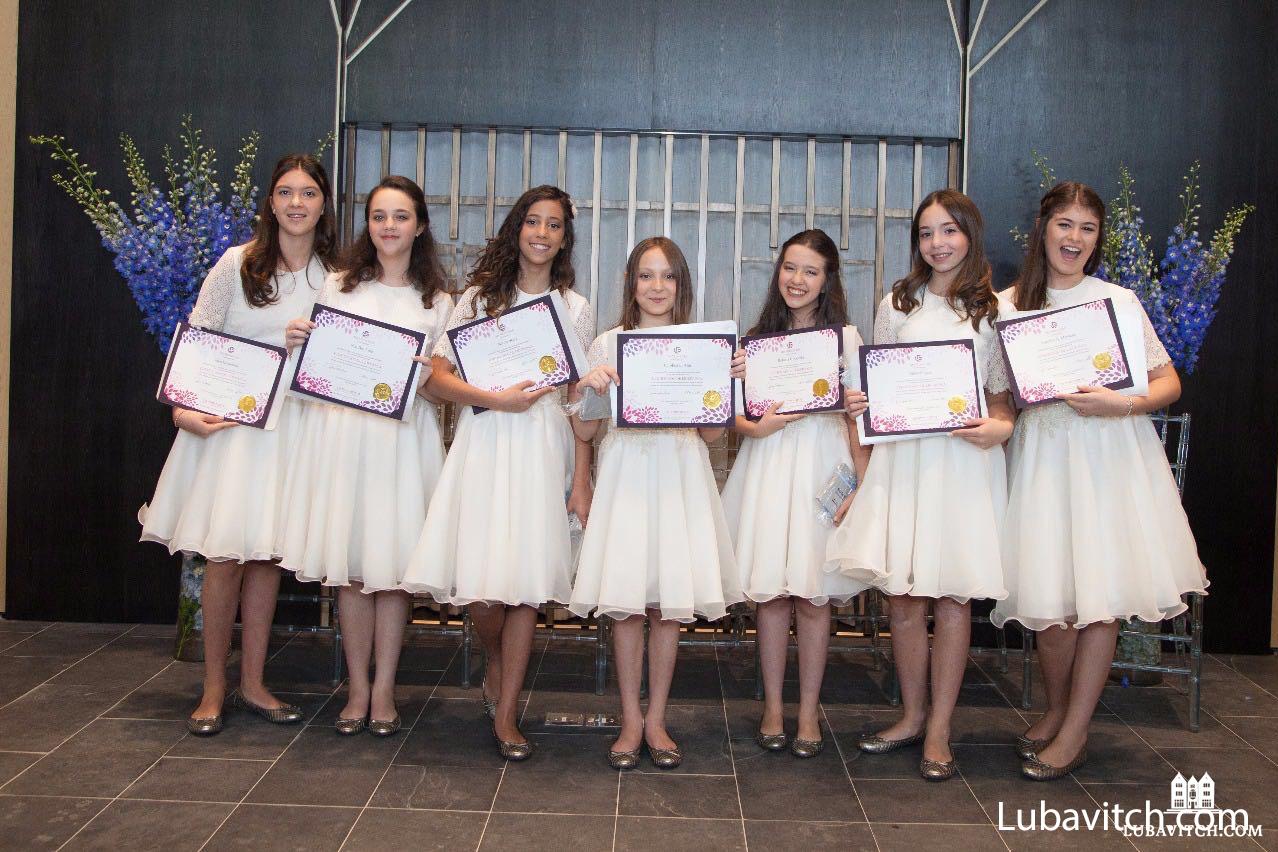 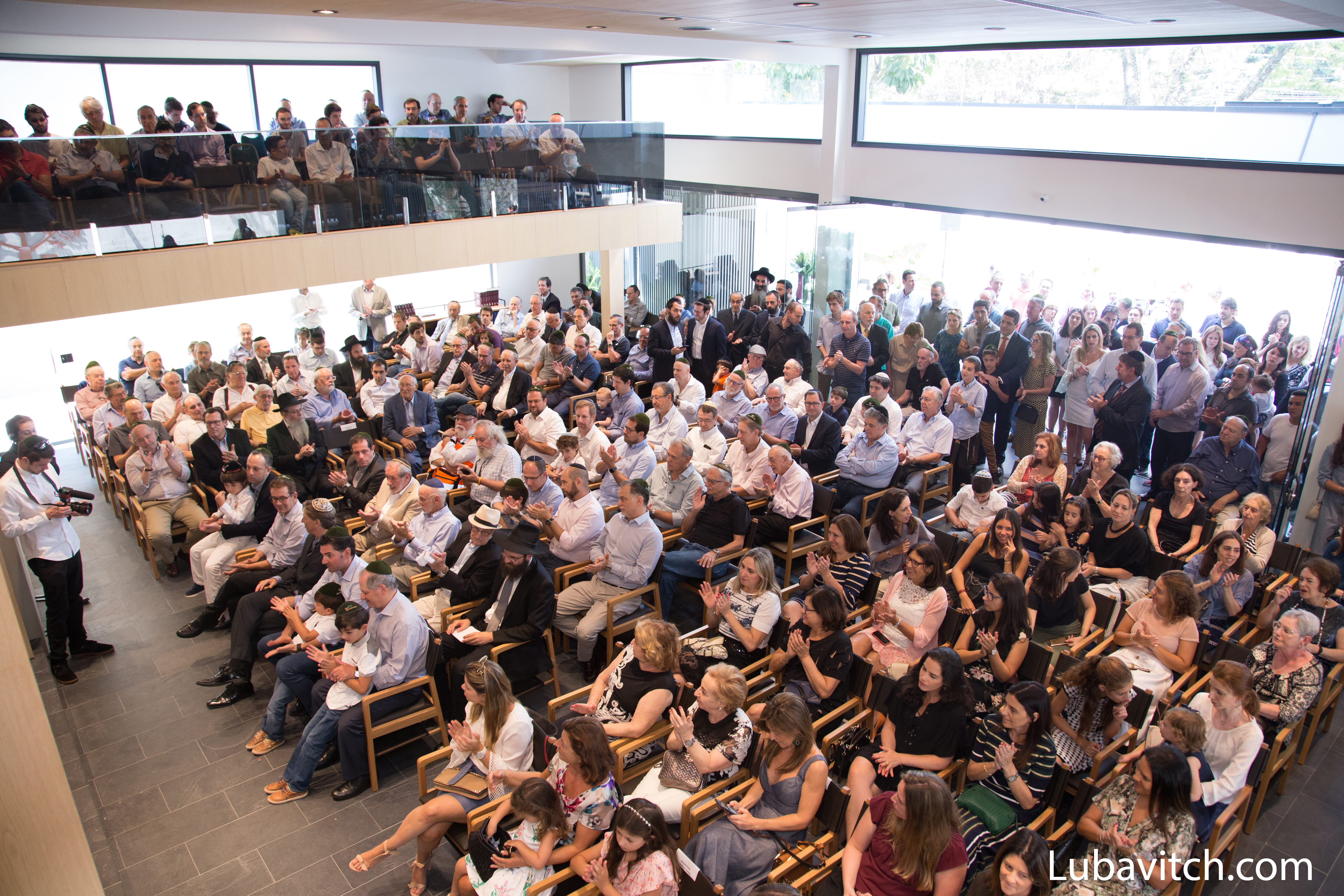 The new sanctuary has space for hundreds