In The Serengeti: Chasidic Adventures With Chabad 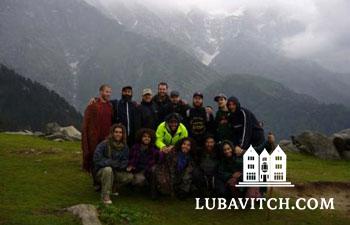 (lubavitch.com/lns) David Abramson is a successful real estate broker in London’s white-hot restaurant scene. He’s well schooled in the plush perks of luxury travel, but in May he’ll be camping out in the Serengeti, in a hut, walking miles through wild grasslands with 14 other men on a Chasidic adventure trip.

Abramson has chosen to join Chabad’s back-to-nature Serengeti trek for the spiritual, emotional clarity the trip promises, and to raise funds for Chabad of Hendon, a bedroom community north of the City of London, at the same time.

“It is an amazing opportunity for me to take a week out from family life and business to have a complete spiritual charge up,” Abramson told Lubavitch.com.

Under the moonlit Serengeti skies, Blackberries fall silent. Emails are irretrievable. In the company of lions, leopards, rhinos, water buffalos and elephants, he expects to “do a spiritual accounting of where I am up to, bond with the group, and get a sense of appreciation for what is really important.”

Charity treks, a fundraising standby in the United Kingdom, are like walkathons . . . on steroids. Participants find sponsors who fund each step of a participant’s trip, often to exotic locales. Chabad of Hendon community has trekked to Dharamsala, India, and up the Himalayas in Katmandu. This year, the expected fifteen to twenty trekkers will be contributing 2500 pounds each (about US$5,000) to spend a week walking the plains of Tanzania.

Bringing a group of Jewish men to an exotic locale, a prospect bubbling over with complications – kosher food, Shabbat accommodations, prayer services are not on the itinerary of most safari providers – is possible because of Chabad’s worldwide network.

“I’ve always received help from my fellow shluchim,” said Rabbi Katz, pointing to Rabbi Shlomo Bentolila, Director of Chabad of Central Africa, without whom, says Katz, "it would have been impossible."

The Chabad shluchim network are an invaluable resource. This year, Rabbi Ari Shishler, director of Chabad of Strathavon in South Africa, is co-leading the trek. He lectured at the Chabad in Hendon, so he is familiar to the group. On the trek, the group will count upon his knowledge of Chasidic philosophy and the ins and outs of traveling safely and Jewish-ly in Africa.

At sunrise each day of the trip, he and Rabbi Katz will lead Chasidic study classes and meditation sessions. Daylight will bring prayer services out on the savannah and nights close with dinners that finish off with a course of singing and soul searching, known in Chasidic circles as a “farbrengen.”

Tapping into Chabad resources a world away, discovering the impact Chabad has on fellow travelers and Jewish communities in off the map areas, is an awakening for the trekkers. After past treks, participants have opened their homes to the Chabad representatives they met in India and Nepal, giving them a platform to get other Brits involved in their work.

Hendon’s Jewish community steps up to support Chabad because of what they’ve seen their local representatives bring to the neighborhood, said Max Fischtmann, who’s signed up for this year’s trek, despite the trip literature that explains that lizards and beetles are commonplace indoors in Tanzania.

Chabad of Hendon is “a breath of fresh air in England,” Fischtmann said. “Everyone is welcome to come and learn, to build new friendships, it’s a place where everyone knows your name.”

After a peripatetic life, Fischtmann – a Dane by birth who’s lived in Israel and commutes to Germany for work – calls staying home a holiday. The last time he slept under the stars he was serving in the Israeli army. Still, he’s packing his rucksack for the Chabad trek, relishing the thought of learning Chasidic concepts, photographing giraffes and turning off the world for a while.

“I think it’s human nature to chase success no matter how much success has been attained.  To be in Africa, without phones and laptops you have a chance to detox.”