In Prague: Chabad-Lubavitch Takes Judaism Out of the Cemetery 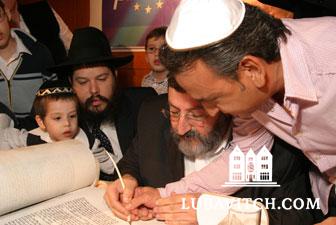 Rabbi Manis Barish, at left, watches with his son, as the scribe fills in the final letters of the Torah. (Photo: Petr Kliment for Lubavitch.com)

A plaque on a building in one of the Jewish Quarter’s side streets in Prague reads:

This building was the Jewish Primary School 1920-1943.
And the Central Jewish Museum 1940-1945
Most of the Children, Teachers and Museum Staff Perished in The War.

The building was designated by Hitler to be a “Museum of An Extinct Race.”

Instead, the music of Am Yisrael Chai reverberated through the streets of Prague Tuesday night as the city’s Jews danced with a new Torah scroll encased in silver, donated by the Safra family to Chabad-Lubavitch of Prague.

Tourists visiting this extraordinarily beautiful city–home to the famous 13th century Altneushul; pulpit and burial place of the Maharal, Rabbi Yehuda Loew (1525-1609); legend of the Golem; Franz Kafka and, finally, the starting point for the Jews deported to Terezin–are often misled to believe that Jewish Prague is to be found in its museums and cemetery, in objets d’art and historic monuments.

But those living here learn quickly that in this most secular city of 100 spires with only about 1700 identifying Jews, is a vibrant hub of authentic Jewish living, where Torah, Shabbat and mitzvot are part and parcel of a warm, inviting family: Chabad of Prague—Rabbi Manis and Dini Barash, and their children are synonymous with the yiddishkeit that lives and grow here.

Against incredible odds, the Barashs have taken Judaism out of the cemetery and revived it for the city's Jews.

“If not for Chabad, I would not stay in Prague,” Esther ben Peretz, a native Czech said as her little daughter, Keshet, a Chabad preschooler, danced to the music in Prague’s Intercontinental Hotel, where the final letters of the Torah scroll were being inscribed.

“Dini and Rabbi Barash have made us feel so welcome, and have connected so empathetically and genuinely with us,” she says. “It is really only because of them that the Jewish people of Prague have a place to come to where they can feel Jewish.”

Esther, who converted to Judaism in Israel after being drawn to it by some  inexplicable pull, explains that most Jews here do not observe and are distant from Judaism. But scanning the room alive with laughter, music, and endless mi-sheberachs, she notes, "Whenever Chabad does something like this, they show up.”

The 100 or so who watched as the Torah was being completed were an eclectic bunch—among them local Czech Jews, Israelis, Americans and Russians, business people and professionals, young families and singles, all of whom have made Prague their home.  Among them as well were Sefardic Jews who took particular joy in the event.

At the initiative of Rafi Ohana, a local tour leader who has made his home with Chabad of Prague, the Sefardic Jews who are regulars at Chabad will now have a Torah scroll in their own tradition.

“We have a Sefardi minyan on Rosh Hashana and Yom Kippur alongside the Ashkenazic one,” said Rabbi Barash. “So Rafi’s idea, and his determination to see that we now have a Sefardic Torah, makes everyone feel fully at home here.”

Against the backdrop of Prague’s Jewish Quarter, with the Pinkas Synagogue, the Klausen Synagogue, the Maisel Synagogue, the Spanish Synagogue –all museums now, all for a fee (there’s even a fee that must be paid if you want to pray at the grave of the Maharal), hands reached out to touch the Torah and dance with it under the chuppah as it made its way to Parizska 3, right off Prague's Old Town Square, where the entourage was greeted by the other Torahs that were brought out of the Chabad House.

Three German speaking women followed the ceremony all the way curious with  questions. They had heard that the Jews had something called a Torah.

They had even seen one in a museum. They had no idea, they said, that people actually held it and celebrated with it.

Inside, the hakafot went on for hours, children perched atop shoulders, waving flags and reaching out with little fingers to kiss the Torah.

Daily, Chabad’s alternative to the “don’t touch” museum etiquette that dominates much of Jewish Prague is discovered by Jews—Jews who live here, Jews who visit here, and Jews who want to forget they are Jewish.

Gil Fleischman is a poet who grew up in an observant home in Brooklyn.

“At one point I just left everything,” he says. Dropping his traditions, he arrived seven years ago to Prague where, he chuckles, “I met Chabad and I decided to stay.”

“I just felt comfortable with the Barashs. They represent the message of Chabad that all Jews are welcome, all are equal and all are accepted.” So Gil started coming for shabbat dinners, for Shabbat davening, and now he says, "this is where I bring my friends."

The difference in background between a Jewish boy from Brooklyn, and Esther, a blond, blue-eyed Czech native, could not be greater. Yet both, like so many others, have found their Jewish center through the Barashs.

“Sometimes,” Esther confides, “I wonder how Dini has the strength to stay in Prague.”

“The work that Rabbi and Dini are doing here," she says earnestly, "it’s a holy job.”