IN CONVERSATION WITH RABBI ADIN EVEN YISRAEL STEINSALTZ[Video] 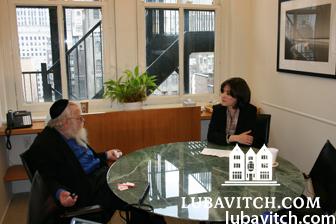 Rabbi Adin (Even Yisrael) Steinsaltz in a recent interview with the editor of Lubavitch.com.
Photo Credit: Photo Credit: Yaacov Behrman

June 25th marked the 15th anniversary of the passing of the Lubavitcher Rebbe, Rabbi Menachem M. Schneerson, of righteous memory. In honor of the occasion, lubavitch.com interviewed Rabbi Adin (Even Yisrael) Steinsaltz.

Rabbi Steinsaltz, a noted rabbi, scholar, philosopher, social critic and a prolific author on a wide range of Jewish topics, is most commonly known for his popular commentary and translation of the Talmud into Hebrew, French, Russian and Spanish. A Chasidic scholar as well, Rabbi Steinsaltz has translated the Tanya, the primary source text of Chabad Chasidism, into English and written numerous works on Chasidic and Kabbalistic themes.

In 1988, he was awarded the Israel Prize, Israel's highest honor, for Jewish studies.

Baila Olidort: In the last fifteen years since that day in June 1994, now referred to as Gimmel Tammuz, so much has been written about the Rebbe, his life as an individual, as a leader, and  his legacy. What happens to the Rebbe over time?

Rabbi Steinsaltz: It’s a complex thing. The Rebbe is unlike so many heroes whose biographies you can’t sell a year after they’ve died. The Rebbe remains a very active figure even though he doesn’t move with us in this world.

When the Rebbe was alive, he was not just a spiritual leader; he was in many ways, a king, a commander of an army, and he made people move.

We’re not really uncovering new stories about details or parts of his life. Instead, what appears is a picture of an individual who is almost a supernatural being.

RS: Of course it matters, the Rebbe was very clear about what he said. He said, “Don’t make interpretations of what I said. If want to say something, I can say it clearly and sharply.

So whatever you make of the Rebbe, if it is not true, the Rebbe would object to it.

BO: But what of the theory that once something is out there, it becomes the domain of the public, and intent doesn’t really matter?

But with the Rebbe, he was very clear, he was very sharp about keeping his message as it was. If I water it down, or honey it up or pepper it—that’s not right.

BO: In the 1980s, the Rebbe said that all the obstacles in the path of Moshiach have been removed. And he sparked a sense of the imminence of the redemption. What are we to make of his statement today, thirty years later?

RS: As I see it, the coming of Moshiach is the end of history. It’s not just by chance that the redemption is likened in the sources to giving birth, and is referred to as “birth pangs.” Some deliveries take a long time, and there’s lots of suffering and bleeding and crying. So when we speak of the coming of Moshiach, we are talking about a world being born, and the framework of the birth pangs may be longer than we expected.

BO: When we spoke last time, you talked about the evolution of society, science, history as being signs of change and movement towards the eventual Redemption. And in a certain respect we can see how the world has changed. We see greater tolerance, compassion, a wide embrace of Judaism’s universal values, and in this way, more progressive attitudes. But that usually goes together with having less tolerance for the particulars of Judaism.

RS: Yes, well, being tolerant in our world is true in the Pickwickian sense. The tolerant are tolerant only within a certain framework. There is a dictatorship of the intolerance of the tolerant.

As for change, we can point to certain things that are moving in a certain direction, but are they progressive? That’s a very loaded word and probably shouldn’t be used in any intelligent conversation.

Things are changing in all kinds of strange ways. A stronger monotheism is coming to the world, for example, with Islam. The Rebbe pointed out many years ago, that the importance of Islam needs to be taken into account, and it is being underestimated.

Humanity has not conquered disease. But today, to speak of living to 120 is no longer a joke. So again, there is change. But it is uneven.

Of course, if change would come as we dream it should, that itself would mean that Moshiach is here.
BO: What of the anti-Semitism that we’re seeing today? That doesn’t look like change in a good direction.

RS: Most of the modern type hatred of Israel and Jews, comes from a belief that the Jews are somehow superior. Because of that, there are much higher demands on our behavior. The anti-Semitism begins from a strange belief that the Jews are superior, so they have no right to behave as ordinary people. It’s as if they are saying to the Jews, “You are children of the Almighty, yet look how you behave–like us!”

So it is painful, but it is an admission that you haven’t heard in many years.

BO: What do you think the Rebbe’s vision was for the State of Israel? On the one hand, he exhorted the government to honor Jewish principles. On the other, the idea of religious coercion by the State would never work.

RS: The issue really is the attitude in Israel. As an example, the Israeli government brought in large numbers of Russian non-Jews as immigrants, which created a real problem, and the Rebbe was very concerned about that. The Israeli agency wanted numbers, so they got numbers and they didn’t care for the results.

Now if the atmosphere in Israel was different, these immigrants would convert. Most of them were partly Jewish. And in the past, they had to convert to be accepted as full Jews.  Today, Israel—not as a state but as a society—accepts these half or quarter Jews as Jews, so there’s nothing pushing them to convert.

BO: So there’s an example of how there’s less interest or sympathy for the particulars of Judaism.

The famous Israeli writer S. Yizhar (Yizhar Smilansky) once told me, “You know, I never had a grandfather as you did. My father just cut off every part of life that existed before he came to Israel. Nothing else was there.”

In fact, in those early years, Israelis grew up believing that they are a different race—different from the Jews.

And this created a serious gap, a real disconnect. Israel has really lost a part of its Jewishness as a result of the estrangement and distance, not only from the practice of Judaism, but also from all knowledge of it.

That was of deep, deep concern to the Rebbe. The idea that generations of Jewish children are growing up in Israel with no knowledge of Tanach, of the fundamentals of Judaism—means that the gap is not because of the laws or the particulars, per se, but because of the atmosphere that is destroying their Jewishness. This is what the Rebbe wanted to repair.

BO: Generally, the Rebbe took an optimistic tone in his talks. But in his 40-plus years of speaking, there were maybe a handful of occasions—one specifically comes to mind, when a young mother was murdered in Crown Heights, and the Rebbe addressed the tragedy, expressing a visceral grief. Listening to him then, one heard the inconsolable pain of a father, faced with a colossal loss, rather than words of spiritual redemption.

RS: The Rebbe was the vehicle that contained the tears of the Jewish people. The Rebbe heard pain and suffering, not just day after day, but minute after minute, so he had to contain all the pain. From time to time the weight of these tears, all the pain, all the suffering, was revealed.

BO: You remember of course, the statement he made a few years before Gimmel Tamuz, which resounded with resignation or great despair, when he said, “I’ve done all I can, now it’s up to you.” This struck a chord with everyone, because it seemed so out of character for the Rebbe who generally exuded a sense of optimism.

RS: The optimism of the Rebbe was not always light. It was not a point of view that saw a rosy existence. His optimism meant that if you are willing to fight and work hard, there is a better future.

Even his last statement, which you may say was a statement of deep despair, doesn’t mean that he gave up the desire, the dream and the ideas. He said, “I did to the utmost of my ability, I tried to do on my own what I could, so I am now leaving it in your hands.”

He did not abandon his vision. So he wasn’t an optimist in the sense that he would say, you just rest, everything will be alright, you’ll wake up, the sun will shine, your dead wife will come back and your estranged children will come running to you. Rather, he said that if you work on it, if you go on, if you fight for it, then you have a good chance of getting yourself into a better position.

And he believed that you can do it. That was his message to everyone. In fact, that’s what he said to the Ribbono Shel Olam [God]: “You can do better.”