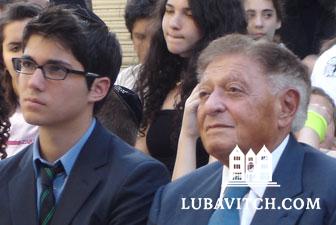 Mr. Sami Rohr, and his grandson, at the Ieladeinu dedication for the newly renovated orphanage.(photo:lubavitch.com/lns)

Last week, the IELADEINU child-care agency in Buenos Aires dedicated a newly renovated building for its universally acclaimed child care program. The building, home to 30 children who have no other place to live, bears the name of Mrs. Perla Rohr, mother and grandmother, respectively of philanthropists Mr. Sami Rohr, and Mr. George Rohr. To date, IELADEINU has taken some 300 children under its wings in a way that has drawn the attention of UNICEF and become the subject of a book by UNESCO.

(Lubavitch.com/LNS) When Eduardo was six years old, he couldn’t tell you that. He didn’t know what you to do with a fork or spoon. He’d never eaten at a table. He’d never eaten a cooked meal. Eduardo had a swollen, infected sore on his foot, but refused to remove his shoe. When anyone approached him, he threw his hands up over his head as if he was expecting a beating.

Locked up at home by a violent father and non-responsive mother, Eduardo’s life was on a downward spiral from the moment of his birth. Sooner or later, social services would find him, and place him in one of the city’s reform institutions. Then, if things took their predictable course, Eduardo would break out of there and join the other ragamuffins on the streets of Buenos Aires. If he could learn the art of petty theft without getting caught, Eduardo might even count himself lucky.

Eduardo was on his way to becoming another one among the thousands in Argentina’s tragic statistics. But five years later, this lanky adolescent with tousled brown hair and a mischievous chuckle seems every bit a well-adjusted adolescent. He visits with his mother once a week, and is earning B grades at school. Eduardo loves drumming, and zips around on his skateboard instead of walking, wherever he possibly can.

He’s also become one of the reasons an obscure Jewish service for children at risk in Buenos Aires has drawn the notice of UNESCO and UNICEF representatives. Well acquainted with the hopeless pattern of Latin America’s street children and the dismal results of social service agencies trying to mainstream them, they praise IELADEINU as a “model to be followed universally,” worthy of influencing public policies on medical and social services programs for children at risk.

Eduardo’s rehabilitation is repeated in case after case emerging from the Chabad-sponsored IELADEINU program.

Confirming these remarkable results is a review conducted by UNICEF that measured ILEADINU’s impact in the cases of 243 children and teenagers.

Among the findings, the school dropout rate fell from 17.7 percent before intervention, to 6.9 percent after intervention; overall inability to communicate plummeted from 40.9 percent to 18.9 percent; personal hygiene problems from 34.8 percent to 4,2 percent, and perhaps most impressive were the plummeting rates of physical and emotional abuse by the parents, which dropped by as much as 87 percent following intervention.

The findings have so captured the amazement of leaders in child care, it is the subject of a new book, Violence Against Boys, Girls and Adolescents, Ieladeinu Program: A Comunity's Solution, to be published in 2008 by UNESCO.

The only thing about it all that astonishes Rabbi Tzvi Grunblatt, head Chabad representative to Argentina, is how IELADEINU, a Chabad sponsored agency, has evolved, from an impromptu appeal to a judge, on behalf of two Jewish children back in 1999.

Living in substandard conditions with a psychotic father, the judge ordered the children to be removed from their home. They would be placed with a gentile foster family.

Chabad in Buenos Aires hired a lawyer, and Rabbi Grunblatt appeared before the judge requesting that the children be transferred to the Jewish community. The judge agreed, and Chabad recruited a loving, highly trained social worker who would work with the children and their parents, in their home.

Within a few days, Rabbi Grunblatt received a call from another social worker, asking for help for an 11 year old confined in a facility for minors at risk, where he was actually being viciously targeted by his peers, because he was Jewish.

Then the judge called. Dr. Alejandro Molina, who would soon be appointed Defense Counsel for Minors at the Court of Appeals, wanted to know whether Rabbi Grunblatt “would be willing to receive Jewish children at risk often encountered in cases brought before our courts.”

Chabad did not have a child care program in place. Neither did the Buenos Aires Jewish community. In fact, in all of Argentina, not a single program for children at risk existed.
Grunblatt had to act fast. The judge would give him one week.

“Our objective always is to reconstruct a family rather than break it apart,” explains Grunblatt. Wherever possible, IELADEINU brings help into the home and works to rehabilitate family life. That was the beginning of IELADEINU’s Family Assistance program.

Today, 107 children benefit from the Family Assistance program that allows them to remain with their parents, while supplementing all forms of functions and services critical to their well being.

Another 111 children are in IELADEINU’s Day Shelter—a comprehensive program that brings the children to the center early in the morning where they are dressed and fed and taken to school, and takes them home at night, after they’ve had dinner at the center and are readied for bed.

For children whose family dynamics make it unsafe for them to remain at home, IELADEINU has opened five foster homes. At present, there are 57 children in these homes.

By now, 300 children have been cared for by IELADEINU, with 275 children presently in its care. Some, like the 7-month old infant that was brought by police to IELADEINU in middle of the night, are eventually placed with an adoptive family, in this case, a loving couple that could not conceive.

Rabbi Grunblatt readily agreed to shoulder responsibility when the first cases came tohim  back in 1999, but the weight of the burden—become full providers for 300 children hit Grunblatt hard two years later, when Argentina’s economy collapsed in 2001, leaving thousands of the country’s wealthy begging for bread.

Sara Kavana, President of Friends of IELADEINU,  recently launched the establishment of a $12 million endowment fund that would ensure IELADEINU’s future. “With the fund, Jewish children in unfortunate circumstances will always have a home,” she says.

A psychologist and marriage/family therapist in private practice in Miami, Sara was inspired to throw her support behind IELADEINU after spending time with the children when she visited Buenos Aires several years ago.

The beautiful thing about IELADEINU, she says, “is that the children do not feel like they are in an institution.” They are loved, and the homes are just that—warm, comfortable homes where children feel secure and respected. “Every Jewish community in Latin America,” she says emphatically, “should have a IELADEINU.”

Dr. Bernardo Kliksberg, Senior Advisor to the UN Development Program/Latin America, agrees. 40 million children wander the streets in Latin America today, a problem that became aggravated when Argentina lost much of it middle class. While there never were a significant number of Jewish children living in the streets, there are now, he says, and “IELADEINU is the loving response to this problem.”

On staff at IELADEINU is an outstanding team of 130 professionals that provide the children with comprehensive care and necessary counseling, including psychological, psychiatric, health coverage, therapeutic assistance, legal counseling, remedial school work, and more.

But none of that adequately explains the astonishing results that IELADEINU has with its children—results measured by empirical reviews with facts and figures showing success rates that defy all norms.

“I personally had the opportunity to witness the full recovery of a medically diagnosed autistic child who, in a period of six months of loving care provided by IELADEINU, caused the amazement of the medical community,” said Dr. Kliksberg.

Karena Pincever is the General Director of IELADEINU. “It’s the excellent care they get,” she says. “But it’s especially the love we have for them. They are our children.”

Even the hardest cases of children exhibiting anti-social, and untrained behavior are, she explains, rehabilitated with love and endless patience, sometimes to the amazement of the children themselves whose self-worth and self-image change dramatically when they recognize how the adult around them regard them with warmth, love and acceptance.

“I think,” Sara Kavana ventures, “that IELADEINU is so unique because of the Chabad energy behind it. When something needs to be done, Chabad Shluchim do it. Then they think.”

Related Articles
View All
Education
Camp Gan Israel, Sleepaway Edition
55 Attend CKids’ Inaugural Overnight Camp
Education
Two Universities React as Antisemitism Steps Out of the Shadows
While college administrators debate the limit of free speech, Chabad campus leaders take action.
Education
A Hebrew School Becomes A Community
How has one innovative Hebrew School made the Big Apple the city of choice for Jewish families?
Education
Growing Gains in Toronto
Even as he cut the ribbon on the doors of the Romano Chabad Centre, Rabbi Mendel Bernstein knew it was too small.
Get Inspiration to your inbox!
Newsletter
Join our weekly newsletter for inspiration and updates
Donate
Find Your Local Chabad Center
Chabad
About Chabad-Lubavitch
About Chabad Lubavitch
The Rebbe
Headquarters
Magazine
Magazine
News
News & Updates
In The Media
Impact
Social and Humanitarian
Social and Humanitarian
Education
Education
Community
Community