Northbrook teens take action in the aftermath of Texas devastation 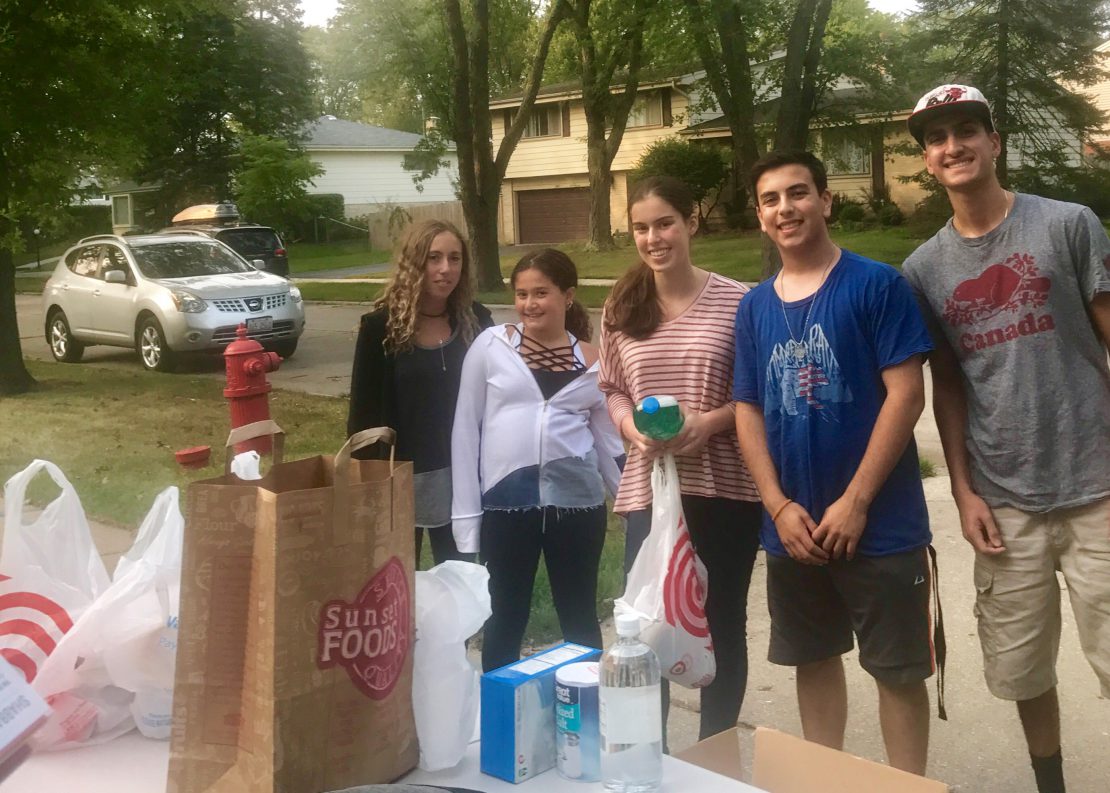 Houston is seeing a wave of nationwide kindness and giving. Teens around Northbrook, IL geared up last week to help those in need in Texas with food drives, fundraisers, and bake sales.

After the recent flooding in Texas, Chabad of Northbrook, Illinois’ local CTeen chapter sprung into action to organize a Houston food and supplies drive.

Volunteers braided challas, which were sold for $18 each, raising an impressive $640 in two hours. By the following day, a total of over $800 had been tallied. Folks stopped by to donate supplies and food as teens sorted and re-packed food, diapers, back-to-school items, and cleaning supplies to be sent to Texas.

“I was so happy to come and help out,” shared Michael, 14. “I felt so helpless watching the events unfold on television. I decided that instead of being a bystander, I would take action.”

Rabbi Meir Moscowitz, regional director of Lubavitch Chabad of Illinois and director at Chabad of Northbrook, says it’s been inspiring to see how the teens came together in this effort. “These are the moments that truly make a difference in a young person’s life. It says a lot about who they are that they stepped up to the plate to make a difference.”

In total, Northbrook CTeen collected eight boxes of dry foods, cleaning agents, diapers, baby formula, and more. Together with the community’s support, they raised $1,237. This is just the beginning of the incredible impact teens can make.

Northbrook CTeen director Esther Greenspan notes that the Houston disaster has given teens a platform to discover “just how much good they’re capable of doing.”

Related Articles
View All
Teens and Seniors Link Hearts
At a time when most middle-schoolers and teenagers are preoccupied with their Snapchat stories or the latest Adidas shoe, Shelly Klein finds it a refreshing…
Nine Million Dollar Building is First of its Kind in the World
The Jewish Youth Network offers programming and classes for Toronto’s younger set. Students can earn high school credits through after-school Torah classes, volunteer at a…
Get Inspiration to your inbox!
Newsletter
Join our weekly newsletter for inspiration and updates
Donate
Find Your Local Chabad Center
Chabad
About Chabad-Lubavitch
About Chabad Lubavitch
The Rebbe
Headquarters
Magazine
Magazine
News
News & Updates
In The Media
Impact
Social and Humanitarian
Social and Humanitarian
Education
Education
Community
Community