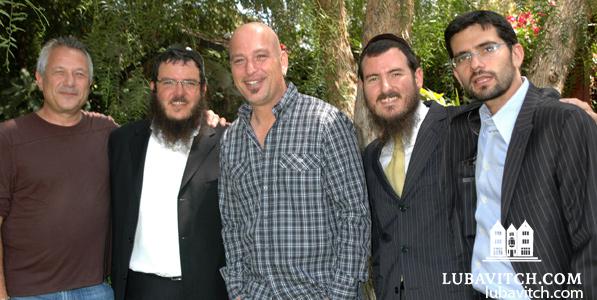 (lubavitch.com) Howie Mandel took time out of his production schedule today to visit the Chabad Residential Treatment Center in Los Angeles and talk with residents who are recovering from addiction to drugs and alcohol.

Mandel is well known to fans as both an extremely popular comedian who performs two hundred nights per year, and as the host of the hit show "Deal or No Deal,” for which he received a 2008 Primetime Emmy Award nomination.

During his visit to the Chabad Residental Treatment Center, Howie toured the facility with director Donna Miller, taking time to speak one-on-one with residents, bringing them inspiration, encouragement and laughs.

Howie later described his feelings about the visit.  "I knew about Chabad's work.  I knew they do great things.  That's why I always participate in the Chabad Telethon." Visibly moved, he said, "But to see the work that's done here makes it all the more real.  This reminds me of the first episode of 'Deal or No Deal.'  I had spent weeks obsessing about how I could make the show interesting and about my performance.  Then, when the very first contestant came out, I saw her face and how much this meant to her.  I still remember her name.  She needed this money.  This was a human being in an honest moment — and suddenly I realized that the show isn't about me, it's about the people who come on it.  That is what I felt today.  It's one thing to hear about people being helped, but it's quite another to see them first hand."

A mini-documentary of Howie's visit by Director Kevin Bright ("Friends") will air on the upcoming Chabad "To Life" Telethon.  The 29th Annual Chabad Telethon will air on Sunday, September 13 from 5-11 PM (PDT) on KTLA 5 in Los Angeles, WLNY in the Tri-State area, KTSF in S. Francisco, and nationwide on DirecTV's JLTV Ch. 366.  The Telethon will stream live online at ToLife.com.