How Can I Make This World A Better Place?

Social Vision: The Lubavitcher Rebbe’s Transformative Paradigm for the World 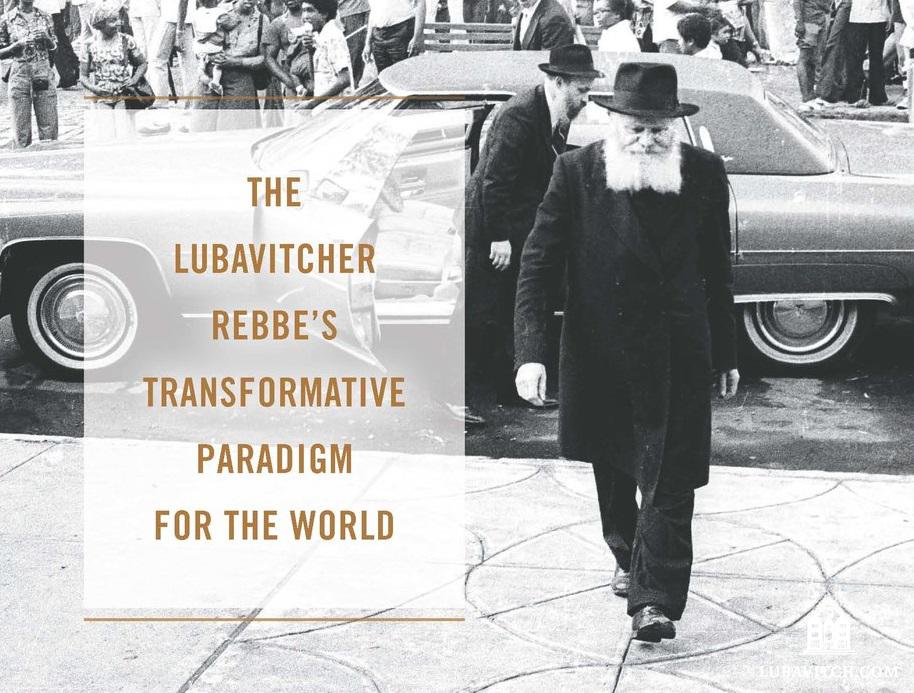 The plethora of biographical books and articles about the Lubavitcher Rebbe, Rabbi Menachem Mendel Schneerson, have typically summarized his impact on the Jewish community by emphasizing his love and care for every individual. His voluminous correspondence, the hours he devoted to personal audiences, and his assignment of emissaries to the farthest reaches of the globe, often to places with miniscule Jewish populations, all underscore his conviction that no Jew is insignificant. To this end, accounts of the Rebbe’s care for the distinctive perspectives and struggles of Jews around the world have been disseminated by JEM (Jewish Educational Media) under the title My Story. Deeply personal and emotionally moving, these stories elucidate the Rebbe’s leadership vis-à-vis his ability to connect with the great diversity of humankind. One person at a time.

The premise of Social Vision is a different one. Through a dramatically different looking glass, sociologist Philip Wexler, along with Eli Rubin and Michael Wexler, explore and examine the Rebbe’s life and work, showing how the Rebbe’s unique philosophy might offer a guiding vision for a larger—more than Jewish—society.

At the outset, Wexler plunges into a dynamic mapping of sociological thinking. To help lay readers understand the purpose for his using a sociological approach to understand the life of the Rebbe, Wexler begins by describing the “prophetic” nature of sociological analysis, a method that not only seeks to describe and proscribe social behaviors and collective events, but that also aims to predict what the world might look like in the future (p. 9). By way of illustration, Wexler cites the penetrating work of Pitirim A. Sorokin (1889-1968). A sociologist in Russia at the turn of the twentieth century, Sorokin saw the financial and political unrest of the nineteenth century as a shift. He described it as a shift from what he called a “sensate” mentality—a way of thinking only concerned with what could be physically understood, to what he called an “ideational” mentality—a view of the world that attached itself to concepts and ideas, where physical reality was regarded as “nonsense and non-material.” A dense idea to be sure! And, to the lay readers’ relief, Wexler does not seem to need us understand the nuance of Sorokin’s work. Wexler does however hope his readers will understand the essence of Sorokin’s point. Whether it hoped to or not, the dramatic shift that took place in the zeitgeist of the early twentieth century did not bring about a more spiritual universe. Rather, Sorokin saw that the shift that did happen reflected a social devolution into increasing meaninglessness. In a very real sense, the world today can be seen as a continuation of this trend. We have more and more access to data and information, but less and less but access to the real stuff that gives meaning to our lives

It is against this backdrop that Wexler outlines a third “mentality” that perhaps we could call the “Chasidic” mentality. Rooted in Chasidic ethos and embodied by the Rebbe and his followers, this worldview is fundamentally joyous and inherently relevant to everyone. This view furthermore imbues our small human lives with the feeling of sacred cosmic significance and it celebrates the possibility of self-transformation, even for sinners (p. 19). A founding father of this Chasidic worldview, the Baal Shem Tov (1698-1760) revitalized a great part of the oppressed Eastern European Jewish community during the eighteenth century by teaching Jews to see their suffering and exile as the dark soil within which lay the very seeds of their redemption. Wexler reminds readers of the vital image from the Talmud: the messiah is born on the very day that the Temple is destroyed (p. 22). Wexler then goes on to detail how the Rebbe, like his predecessor, framed the immense suffering of the Holocaust and Soviet oppression in similar terms—as part of the dialectic of the unfolding of the redemption. The Rebbe, too, taught that these painful events served as catalysts for change and transformation, for both the greater Jewish community and for the world.

With this understanding of the Chasidic mentality and of the Rebbe’s vision in place, Wexler now turns to the book of Tanya, the seminal work of Rabbi Schneur Zalman of Liadi (1745-1812). In this five-part tome, Wexler explains, Rabbi Schneur Zalman teaches about the personal battle each person must fight to overcome the inclination to “selfishness rather than service, the sensuous rather than the spiritual” (p. 26). Rabbi Schneur Zalman offers his assistance to those undertaking this battle by providing a toolkit of contemplative practices, aimed at bringing about spiritual self-mastery. But whereas in this text and through his life, Rabbi Schneur Zalman addressed the psychological and personal pathway to divine service, the Lubavitcher Rebbe seemed more concerned with the societal and sociological approach. As Wexler describes it, the Rebbe’s concern was less with how can I become a better person than with how can I make this a better world.

This is the central idea that drives the rest of Wexler’s insightful book. Again and again, Wexler invites readers to move beyond the notion of the Rebbe as “personal mentor par excellence”—concerned primarily with helping people self-actualize and achieve their own potential. Instead he turns to the Rebbe’s legacy in terms of his vision—social, prophetic and messianic. According to Wexler, the Rebbe’s vision views all creations as an integral part of a greater universe inspired with direction, meaning, and purpose. It is a world in which people are uplifted by seeing themselves as part of something more significant than they could ever be on their own.

Unlike so many of the “isms” of the last century, the Rebbe’s view in no way obliterates the value and inherent uniqueness of each individual. Care for others does not come at the expense of self-actualization. Rather, the Rebbe, like other great sages, appreciated that we experience happiness and satisfaction by going beyond ourselves in the service of others. It is this understanding that led our sages to say: even more than the householder provides to the pauper, the pauper provides to the householder, for the pauper provides the householder with the opportunity for human interaction and reciprocity, for recognition and self-transcendence (p. 113). Thus, in Jewish law, everyone is obligated to give according to their means, even one who is very poor. All, in this way, are enabled to step into both sides of the giver-receiver relationship.

Wexler further highlights how the Rebbe’s worldview offers an uplifting role for individuals to play within the greater collective. The Rebbe sees two people coming together in shared purpose “like one man with one heart,” a union which creates a new entity (p. 136). To the Rebbe, Wexler points out, the crowd does not drown out individuals, but buoys and raises them to greater success.

In his mapping of the Rebbe’s social vision, Wexler next lays out the Rebbe’s three postulations for how an individual might operate within a collective. First, he posits, a person acts as an individual, alone. Second, a person functions as a unique social actor within a community. And third—listen to how radical this is, Wexler seems to be saying—the person exists as a complete world, the very fulcrum through which the whole purpose of creation is realized. This latter conception, the Rebbe’s own view, points to the fact that people, as individuals, have worth beyond any specific contribution they might make to their community. Importantly, this position nullifies the call for the “sacrifice of the individual to benefit the collective,” a feature of so many utopian movements of the last century that led to great abuse and suffering.

At the same time, the Rebbe’s understanding of the “individual as the whole” also calls to task an individual who is preoccupied with selfish concerns. Not only is this person, according to the Rebbe, diminished by not contributing to the lives of others, but this person is also obstructed from his or her own self-development by only tending to one small part of the whole.

Wexler illuminates how even small acts in the Rebbe’s life and teaching underscore this message, such as the Rebbe’s emphasis on celebrating one’s birthday as a day of self-reflection in the company of friends. In no small way, the Rebbe is saying, each life has inestimable value, and that value is multiplied through the sharing of it. Wexler subsequently analyzes a number of the Rebbe’s teachings and programs in this light.

Rare and fresh is a book like Social Vision that re-examines the life and contribution of the Rebbe, inviting readers to move beyond the individual and to see themselves as a part of something far larger and more meaningful. While much of the text is written in academic jargon that only a fellow sociologist could love, the reader who perseveres will be rewarded with a deeply enriched perspective on the Rebbe’s visionary leadership. Even more so, the reader who takes his or her time, will find in Wexler a partner in the worthy quest for personal meaning and spiritual fulfillment.

Social Vision: The Lubavitcher Rebbe’s Transformative Paradigm for the World

By Philip Wexler with Eli Rubin and Michael Wexler 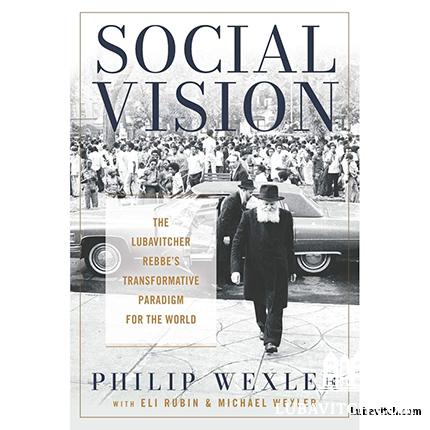