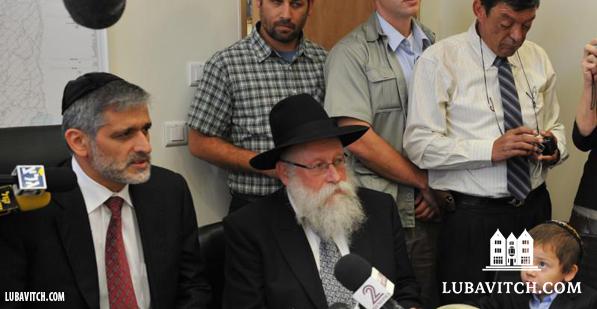 (lubavitch.com) Sandra Samuel, the Indian nanny who saved the life of Moshe Holtzberg from the besieged Nariman House during the 2008 terrorist attacks in Mumbai, was issued a temporary residential status and and Israeli ID card today, at Israel’s Interior Ministry where she was honored.

Samuel, who came to Israel in 2008 to help with then two-year-old Moshe, was presented with the documents by Interior Minister Eli Yishai.

Attending the ceremony as well were Moshe Holtzberg, who was presented with a gift by Yishai; Rabbi Shimon and Yehudit Rosenberg, parents of Rivki Holtzberg, Israeli Interior Ministry Director General Gabriel Mimon and the Prime Minister’s advisor Vered Swaid.

According to Rabbi Shimon Rosenberg, the ceremony was a moving experience. “Sandra saved Moshe from the fires of destruction, and for that we must be forever thankful. Especially now, during the Jewish High Holiday season, it is fitting to show our gratitude.”

The attacks claimed the lives of 173 people, among them the parents of Moshe, Chabad Representatives Rabbi Gabi and Rivki Holtzberg and four guests of the Chabad House in Mumbai.

Samuel told Lubavitch.com that she is “happy” that this status will enable her to continue helping Moshe in Israel, while allowing her the opportunity to visit her family in Mumbai.

As to her rescue of Moshe, Samuel denies claims of heroism. “It was something that needed to be done. So I did it.”