Hitting the Books: Shluchim Take Their Study to the Web 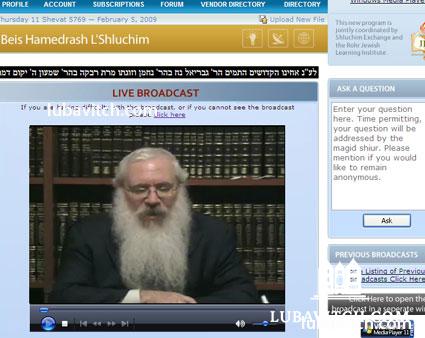 (lubavitch.com) If he is not affixing a mezuzah to a doorpost, lighting a mega-menorah, or frantically picking up last-minute groceries for a large Shabbat dinner, a typical shliach can often be found teaching a class or comforting the bereaved.

But for one hour each Thursday night, his time is his own.

“It is blocked off on my calendar each week. My family knows that unless something major comes up, I am listening to my shiur (Torah class) on the phone,” states Rabbi Yosef Biston of Parkland, Florida. “It is my one chance to study with contemporaries at my level. And it’s a wonderful thing.”

Whether by phone or live internet feed, Chabad representatives around the globe tune into Shluchim Beis Medrash each week. The impetus, explains organizer Rabbi Sholom Zirkind, came from shluchim looking for regular study opportunities in Chasidic philosophy and Jewish law. The weekly classes, airing on Tuesday nights for women and Thursday evenings for men, speak to a wide variety of subjects as requested by participants.

The initiative is a project of Lubavitch headquarters’ division for shluchim services, run by Rabbi Moshe Kotlarsky and sponsored by the George Rohr family. A designated committee, consisting of Rabbi Efraim Mintz (director of the Jewish Learning Institute, JLI), Rabbi Mendy Kotlarsky, and Rabbi Simcha Backman, finalize topics and find appropriate speakers. A complementary program, for non-English speaking participants, is based in Israel.

On its first anniversary the live classes boast of 500 regular participants and hundreds more who access the archived versions.

“I enjoy the classes that address contemporary issues,” says Pearl Krasnjansky who tunes in from Honolulu. “Following the tragedy in Mumbai and during the recent situation in Israel, study sessions helped us deal with our own emotions and helped us formulate responses for our communities.”

Before the High Holidays in September, seasoned shluchim presented a full-day symposium including relevant laws and community practices. They also taught how to lead the services and run a children’s program. When Pesach rolled around in the spring, they were back with a detailed how-to for the seder. Topics have also included the laws of burying the dead and comforting the bereaved; step-by-step instructions on how to run a kosher wedding; and cooking classes that could rival anything on the Food Network.

“The Beis Medrash allows shluchim in remote areas to come together as a unit, to feel part of a much bigger class,” says Kotlarsky. “The interactive nature enables them to ask questions from respected rabbis and mentors, a chance they may otherwise not have.”

The list of instructors reads like a veritable Who’s Who of Chabad’s most prestigious intellectuals. Rabbi Moshe Bogomilsky, noted author and rabbinic authority, was tapped for several classes concerning the laws of a funeral and mourning period. “These are issues that shluchim have to deal with on a regular basis,” Bogomilsky explained, “and these classes provide them with a knowledge base they otherwise would not have.” The expert would know. He regularly fields calls from shluchim looking for guidance, from around the world.

“When I came to Florida in the 1970s, there was no infrastructure to help us,” recalls Biston. “We had to reinvent the wheel each time.” Today, though, shluchim can access weekly speeches, holiday brochures, and program ideas at the click of a button. “And that,” says Biston, “gives us time to accomplish a lot more.”

Several states over, in Utah, Rabbi Benny Zippel agrees. “We moved to Salt Lake City in 1992, when none of the services we benefit from today, like JLI or ShluchimExchange.com, were even dreamt of. Even though every shliach knows on a philosophical level that he is not alone, that the Rebbe is always there, it can still get kind of lonely. These new services take this connection from a purely lofty level to a practical plane.”

Zippel tries to tune into Thursday’s broadcast each week. “As important as it is for a shliach to teach others, he can only function and be productive if he is connected to the source,” he says. “That source,” he explains, “is the Torah and teachings of the Rebbe. The fact that they now make all of this available to us is fundamental.