History in the Making: A Jewish Revival Sweeps Yiddish-Speaking Birobidzhan 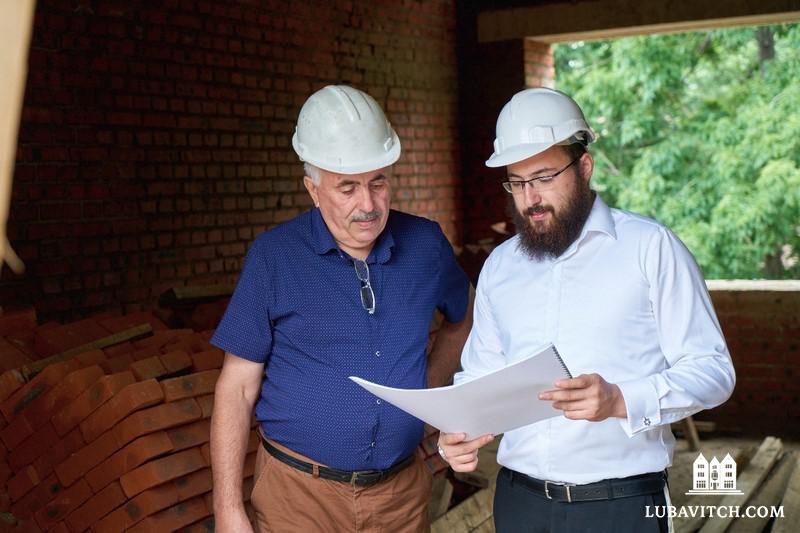 Rabbi Eliyahu Riss and a contractor pore over blueprints for a new mikvah in Birobidzhan.

A mikvah under construction in Birobidzhan? Yes, and it will be the first for the Jews of the Jewish Autonomous Region in Russia’s Far East, where Chabad is leading a revival.

Located near the Chinese border, Birobidzhan is famous for its Jewish culture and heritage, and is the only place in the world where Yiddish is an official language; both the language and Jewish traditions are taught at state schools as part of the region’s national heritage. Home to some 4,000 Jews, Birobidzhan was established in 1930 under the Soviet government as a Jewish autonomous region (to date the only one in the world apart from Israel), and served as a haven for displaced Jews after World War II. Shortly thereafter, however, Birobidzhan came under Stalin’s fire, and nearly all of the local Jewish institutions were liquidated.

Today, Jewish life in Birobidzhan is seeing a revival. A local synagogue, sponsored in part by state grants, was dedicated in 2004, and Chabad Rabbi Eliyahu Riss, who was born in the city and graduated from Jewish educational and rabbinical institutions in Moscow and Israel, has been active in the region since 2012. Recently, the rabbi’s efforts to bring kosher to the remote region put Birobidzhan in the international spotlight. The logistics are complicated and entail shipping perishable goods the 5,000 miles from Moscow via the Trans-Siberian Railway.

“There is a serious lack of kosher products in [Russia’s] Far East,” observes Riss. With the availability of a variety of kosher food products, and the development of a line of locally-produced kosher milk products, Birobidzhan will soon have its own kosher store, the rabbi promises.

To date, the closest mikvah is 120 miles away in the neighboring city of Khabarovsk. But as interest in Jewish tradition and ritual grows among Birobidzhan’s Jews, so too, the need to develop its Jewish infrastructure.

In 2015, Birobidzhan governor Alexander Levintal celebrated his bar mitzvah with Chabad and Russia’s Chief Rabbi Berel Lazar soon after being appointed governor. He was instrumental in helping the community secure a centrally-located site for the ritual bath.

The community is currently raising funds for the completion of the mikvah, and is appealing to the general public to take part in this historic initiative, phase one of a larger project that will include the construction of a new community center and a space that will serve as the headquarters for the local Jewish youth program.

“Thankfully, we have a lot of youth in Birobidzhan. They need their own space—a youth club,” says Riss.

Construction on the mikvah, which is co-sponsored by the Federation of Jewish Communities (FJC) of Russia and local donors Mr. Valdman and Mr. Lubarsky, is set to be completed in September.