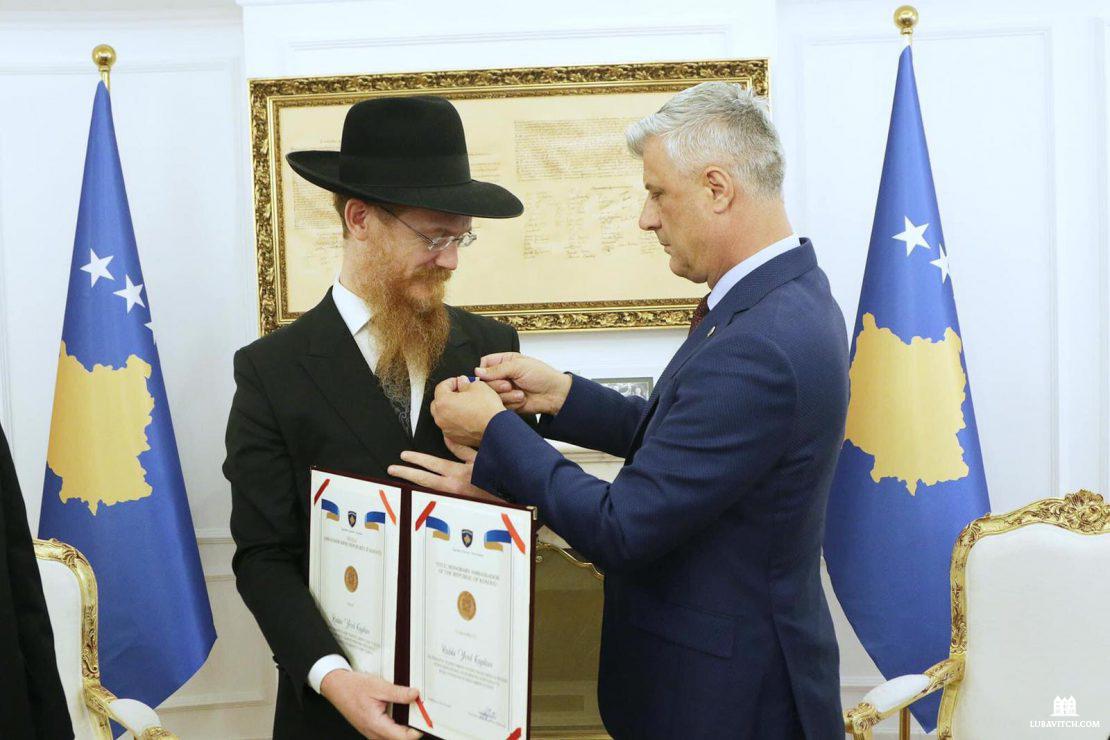 “I decorated Rabbi Yoel Kaplan with the title of Honorary Ambassador of the Republic of Kosovo for his contribution to the rapprochement of Kosovo and Israel and our peoples,” the president wrote in a Facebook post accompanied by pictures of the event. On September 4th, Israel announced its official recognition of Kosovo, which declared independence from Serbia in 2008. This move opens the doors to diplomatic and trade relations between the two countries, and according to Israeli Prime Minister Benjamin Netanyahu, “Kosovo will be the first country with a Muslim majority to open an embassy in Jerusalem.”

Honorary Ambassador is the highest civilian title in Kosovo and is awarded to those who contribute to the national interest of Kosovo and use their fame to help the recognition of the independence of Kosovo. Since 2013 nine people have received the award; six soccer players, a musician, a judoka, an academic. Rabbi Kaplan is the first clergyman. “Ambassador of Honor of Kosovo is a privilege and inspires me to further commit to doing even more for Kosovo,” Rabbi Kaplan remarked, thanking the president.

The award came as Rabbi Kaplan joined a delegation of Jewish American businessmen to Kosovo. The delegation of four Hasidic businessmen was led by Mr. Moshe Klein, a journalist who is active in building diplomatic relations between American Jews and foreign countries. They visited Prime Minister Avdullah Hoti and the president on Friday to discuss trade relations. President Thaci said it was a pleasure to meet with the rabbi and the delegates. “We talked about the history of Kosovo and the relations between Kosovo and Israel, which culminated in mutual recognition and preparations for the establishment of diplomatic relations, the opening of embassies, as well as the future of relations between the two countries but also between the two peoples in general.” The delegation of businessmen presented a decorated Kudu shofar to the president, which he described as a ‘horn of freedom’ and a silver mezuzah case to the prime minister.

During their stay in Kosovo, they visited a mosque where they were warmly welcomed by Imam Labinot Maliqi, Executive Director of the non-governmental organization Kosovo Center for Peace. The Imam worked extensively for peace and mutual recognition between Israel and Kosovo.

“It was a joy to strengthen the Jewish community in Kosovo while doing our part to pave the way for positive relations between Israel, Kosovo, and American Jews,” Moshe Klein said.

Related Articles
View All
Shluchim
Chabad Centers Gear Up for Relief Efforts in Hurricane-Battered West Florida
With thousands still trapped by Hurricane Ian’s storm surge, local Florida Chabad centers are offering a helping hand, delivering meals, and coordinating rescue and cleanup…
Shluchim
Russia’s Rabbis Issue Joint Resolution at Emergency Conference in Moscow
Over seventy-five rabbis who lead Russia’s Jewish communities issued a joint resolution reaffirming their commitment to remain at their posts, and calling for peace
Shluchim
Ep. 29: Everything Grows on Kauai … Why Not Yiddishkeit?
The 29th episode in its series about the personal struggles and achievements of Chabad representatives
Shluchim
Georgia Native Returns as Chabad Rabbi
Rabbi Chaim grew up just north of Atlanta in a home that was traditional, but didn’t practice all the particulars of a religious Jewish lifestyle
Get Inspiration to your inbox!
Newsletter
Join our weekly newsletter for inspiration and updates
Donate
Find Your Local Chabad Center
Subscribe
|
Log In
Chabad
About Chabad-Lubavitch
About Chabad Lubavitch
The Rebbe
Headquarters
Magazine
Magazine
News
News & Updates
In The Media
Impact
Social and Humanitarian
Social and Humanitarian
Education
Education
Community
Community