Captain Ziv Shilon, who was critically injured on the Gaza border and made an amazing recovery, 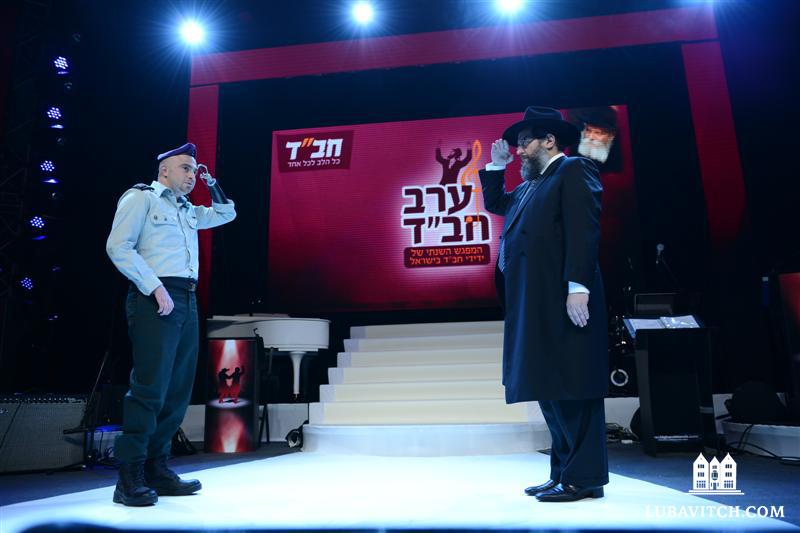 All News
Go to Photo Gallery
By Kobi Nachshoni , Israel

(Ynetnews) It was meant to be another event saluting Chabad emissaries in Israel, but this is a salute they will never forget. Captain Ziv Shilon, an IDF officer who was critically injured when a bomb went off on the Gaza border and became the symbol of fighters’ heroism, was the guest of honor at the ceremony and saluted the hundreds of emissaries – and mainly the late Lubavitcher Rebbe – with his prosthetic left arm.

The emotionally moving event, which was held over the weekend at the Jerusalem International Convention Center (ICC), appeared to be a meeting between two ends of the Israeli society, but was filled with unity and faith. While Knesset members are busy fighting over the haredi draft law, the warm mutual hug between the IDF officer and the Hasidim – and especially Shilon’s remarks – took on a special meaning.

“Our power as a Jewish people will never be complete if we give up on either one of them – the sword and God’s Torah,” he stated.

A member of the Chabad Youth Organization, which organized the event, explained the need for a special tribute to the activists in Israel. “Everyone is talking about Katmandu, but we have emissaries in (the northern town of) Givat Ada to. Here we may not have the heroic halo like in Siberia and the Far East, but the devotion is the same devotion.”

The Jerusalem ceremony lauded the activity in 312 Chabad houses sponsored by the organization and raised funds to keep them going.

Popular Hasidic singer Avraham Fried gave a full show as a proud Chabadnik, and also hosted brothers Aryeh and Gil Gat for a few songs. But the highlight of the evening belonged to Captain Shilon, who spoke about Menachem Kutner, the Cahbad emissary who escorted him from his injury to his return to life, and about his life-altering meeting in New York with the Rebbe’s image and virtues.

In his speech, the officer described the seconds after his critical injury, in which he managed to pick himself up, use his injured arm to carry the other arm, which was cut off, and run several hundred meters towards his subordinates in order to save his life.

“It’s clear to me that I managed to get up only thanks to Providence,” he said, and the audience applauded and wiped away tears, again and again. “This evening I say one more prayer from here: That I’ll be able to restore my right arm and return to my dear soldiers.”

Shilon was exposed to the world of the Rebbe when he traveled to the United States as part of a trip for injured IDF soldiers organized by Kutner. Between one tourist attraction to another, the delegation members got a spiritual time-out when they visited the Rebbe’s grave in New York.

Ziv prayed there from the bottom of his heart for a sign from the rabbi in regards to his own private struggle to return to life, and says he received an “amazing sign.”

“The chapter of Psalms I recited included the word ‘yad’ (hand) three times. That is something which filled me with a lot of strength to move on,” he said excitedly. “I know and I am certain that thanks to the rabbi’s blessing I got to light a Hanukkah candle with my wounded hand.

“The rabbi was a ‘quiet leader,’ as we say in military lingo,” Shilon said following the short yet significant meeting. “A leader with a lot of sweeping charisma who is seen by masses as the leader of a way, and at the same time also a humble, modest leader who gives personal attention to every single person. That is something which captured my heart.”

He concluded by saying, “I find a lot of similarities between the life of a Chabad man and the life of a soldier in Israel: They both dedicate their time and their family life and the most important things in favor of their Jewish brothers wherever they are – either through the power of the sword or in the name of God’s Torah. Our strength as a Jewish people will never be complete if we give up on one of them.”

After his speech, Shilon received a token of respect from Rabbi Yosef Yitzchak Aharonov, chairman of the Chabad Youth Organization in Israel, who saluted him and said: “This evening proves that things can be done differently. We are brothers, and Chabad emissaries in Israel have a strategic role of creating a bridge between all parts of the nation, as the Lubavitcher Rebbe taught us to love each and every man and woman.”