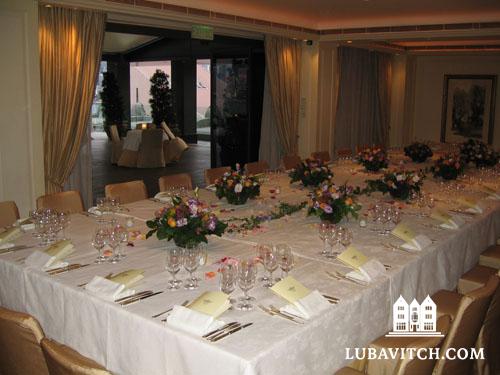 Getting ready for the Passover seder at the Peninsula Hotel. Kowloon, Hong Kong 2006

(lubavitch.com) Some 570 rabbinical students will soon be traveling to any of 285 locations worldwide where they will conduct communal seders this Passover, April 8 and 9th. New on the list of exotic locations slated for Chabad’s seders is Phnom Penh, Cambodia.

At Lubavitch World Headquarters, itineraries for the rabbinical students preparing to lead the seders are being drawn up in coordination with regional Chabad representatives, reflecting numbers that surpass last year’s.

Rabbi Moshe Kotlarsky, Vice Chairman of Merkos, the Chabad-Lubavitch educational division, says that despite the dire economic climate, “The Rebbe insisted that every Jew be given the opportunity to participate at a Seder, and we will do everything possible to make sure that happens on the largest scale yet.”

Funding for the seders comes from several philanthropists including Mr. George Rohr, a long time supporter of Chabad activities, and a gift of $500,000 from energy magnate, Guma Aguiar. This is the second consecutive year that Aguiar, 31, has been a major sponsor of Chabad’s global Passover campaign.

Aguiar became excited about this project last year and contributed towards what is now the world’s largest collective Pesach seder in the world. As a result, he said, "Chabad leaders and I have realized what a truly sacred honor it is to partner together with each other on this project."

The comprehensive list of locations means that Jews—even those in remote points of Africa, Vietnam, China, Chile, Japan, the Caribbean, Ukraine, Russia, Peru and Spain, among many other locations in South America, Central Africa, Europe and the U.S.—will have the benefit of a traditional Passover seder with Chabad.

Conducting seders in some of the backwaters of the Far East and Africa involves often complicated logistics and requires the cooperation of local authorities. Getting vast quantities of matzah, wine, meat and other Passover staples to places that are hard to reach, entails considerable preliminary work to ensure timely deliveries.

With seders hosting anywhere from 20 to 2000 (Nepal), accurate figures for the total number of people who will be participating at Chabad seders are hard to come by, but 500,000 would be a safe estimate, say coordinators.

These seders are in addition to those hosted by Chabad representatives in their respective communities worldwide.

To search for the Chabad-Lubavitch center closest to you, click here.