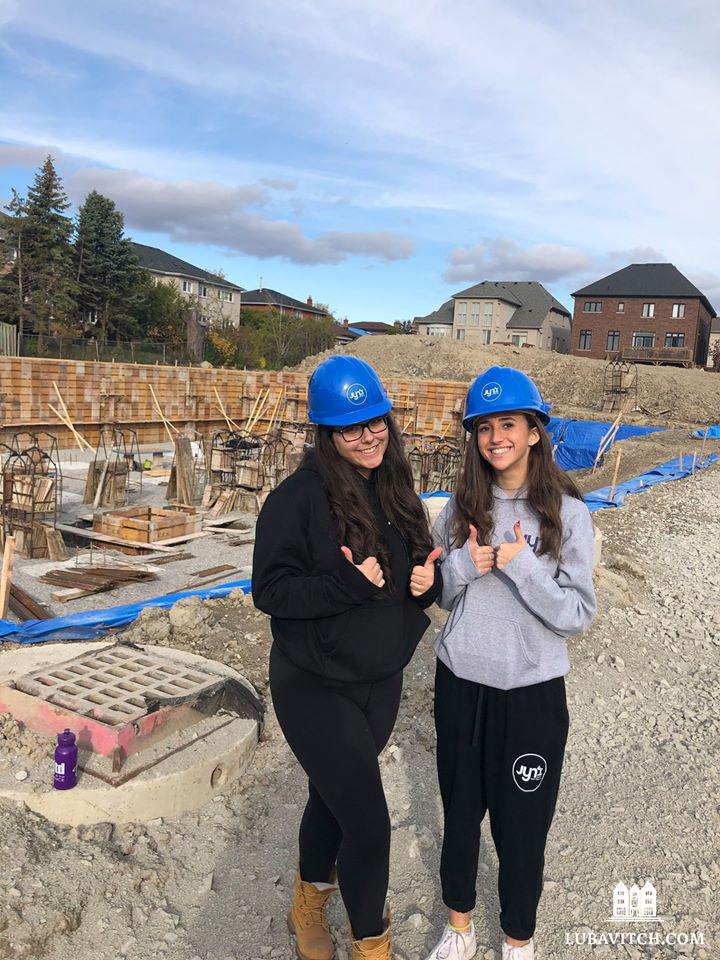 Even as he cut the ribbon on the doors of the Romano Chabad Centre, Rabbi Mendel Bernstein knew it was too small. “We needed a bigger place, but we couldn’t afford it,” he recalls. Instead, the community made do with a sensible 10,000-square-foot building situated on three acres of Richmond Hill in Toronto, Ontario. For the better part of a decade, the rabbi and volunteers transformed the synagogue into a social hall for events, classes, and approximately seventy-five communal celebrations annually. It worked, until it didn’t. “Our community is growing, with new families moving here because of our shul,” says Bernstein. “On Yom Kippur we had people lining the hallways because there was no room in the sanctuary.”

That was last year. The week after Rosh Hashanah, the Centre celebrated the grand opening of a 15,000-square-foot addition. Just a few days later, 1,000 people gathered comfortably for Kol Nidrei. Aside from a separate sanctuary and event hall, the new construction features more classrooms, two new mikvahs, and an extra kitchen.

Three other Chabad centers are also in the midst of capital projects across the greater Toronto area, with a fifth still in blueprints. A total of 100,000 additional square feet are being laid to serve 200,000 Jewish Torontonians. The success of the city’s twenty-seven centers is made possible by the unity of the eighty Chabad representatives and the unique niche that each serves here.

“Toronto is a dynamic community,” says Rabbi Zalman Grossbaum, who has been the city’s senior representative for the better part of five decades. “People identify with Chabad representatives’ dedication and risk-taking. We say ‘we’re going to get this thing done,’ basically on a prayer, and they appreciate our commitment and support it.”

When Grossbaum moved here in 1973, there were 90,000 Jews living in the greater Toronto area. Growth within the original community, coupled with immigration from Russia, South Africa, and Montreal has more than doubled the city’s Jewish population. But even as the community’s population grows, its geographic size has remained constant. To this day, Toronto’s Jewish communities still snake their way along fifteen kilometers of Bathurst Street.

In the late 1970s, Grossbaum purchased a three-acre plot of land to build the city’s first Chabad synagogue. The area was so desolate that the rabbi’s purchase bought him not only the deed to the land but also naming rights for the newly-paved street in front of it. “I was pleased to be informed that the street was named Chabad Gate,” the Lubavitcher Rebbe wrote to Grossbaum in a letter soon after.

Still, however desolate the region may have been, the rabbi knew that it wouldn’t stay that way for long. “When we first arrived,” recalls Grossbaum, “we saw that the city was big enough for shluchim to serve different areas. Our representatives today may be close in proximity, but they are designated for specific demographics.”

When You Have to Have a Plan

Rabbi Levi and Rivky Gansburg moved to six different houses in seven years. Their synagogue bounced around just as many times. One day, in 2012, a congregant asked the young rabbi what his “Plan B” was. Gansburg realized the time was ripe. “We had so many people coming and no real home,” he says. “Our dream was to build a viable, sustainable building to enhance our presence here in Bridle Path,” an upscale residential neighborhood in Toronto. “We put together a great group of people to help, and, in 2014, we secured a piece of land with the help of a very generous donor.” Six years and $14 million later, the Bayview Centre for Jewish Life is almost complete. The 32,000-square-foot building looks like a small luxury hotel and melds perfectly with the neighboring mansions. “It’s been a remarkable run.”

Though he welcomes people of all ages, Gansburg has formed a significant cadre of young professionals. Several years ago, a member approached him with a request: his son had returned from university where he had been spending Friday nights with the school’s Chabad representative and 200 peers. Now, back at home, the son was doing nothing Jewishly-oriented.

The rabbi and the son met and planned dinner “for some friends.” One hundred and fifty young professionals showed up. Since then, this crew has had regular Shabbat dinners, “Scotch and Study” nights, and women’s classes. Most of these events are organized by the young adults themselves.

Now, as Gansburg expands the space available in his Chabad centre, he also looks forward to increasing the centre’s offerings to young professionals. “The baby boomer generation attended synagogue so as not to offend their parents,” Gansburg says. “This generation is answerable to no one. But there is a resurgence today: Young people are coming to shul on their own. It’s critical that we engage them at this stage, as they settle down, start a family and build a life.”

Ten minutes away, Gansburg’s brother, Rabbi Menachem, and his wife Chana spent years figuring out how to attract the even younger set. Their “Kids Shul” strategy for bringing children (and their parents) to synagogue has been so successful that it’s now being implemented in ten Chabad centers around the world. “Saturday mornings are filled with dance, music, and hockey,” Rabbi Gansburg says of the synagogue’s outside competition. Even more daunting, he explains, is people’s discomfort with shul. If they come, they sit in the back row afraid to make a mistake.” The couple realized that if adults had gone to synagogue as kids, “in life, wherever they end up, they wouldn’t be afraid to attend shul.”

Once a month for thirty minutes, before the main minyan begins and before the kids’ extra-curricular activities start, approximately seventy-five kids come to Kids Shul. The children lead the prayers, learning the popular tunes and nuances universal to the synagogue experience. Following the short service, they gather for Kiddush and an extravagant breakfast bar.

Many of those children attend Aleph Champ Hebrew School. With 400 students, it is the biggest Hebrew School in the country. Originally, the school operated out of five local public schools because the Gansburgs had no space to accommodate classes. Today, that necessity has become an asset. “The kids don’t have to go anywhere after school,” the rabbi explains. Roughly one third of the students at these public schools march down the hall at the end of the day to receive their Jewish education.

Hebrew School may not be housed in the Family Shul, but the Gansburgs and their co-leaders, Rabbi Shaya and Esti Spalter’s many other programs have the center bursting at its seams. “Most people build new buildings to double and triple in size,” says Gansburg. “Our new building will just handle the capacity we already have.”

Their 25,000-square-foot edifice, set to open next spring, will feature four floors—two below and two above ground—as well as a rooftop playground and event space. It will also allow for more preschool classrooms. Currently, the preschool, Gan Shalom, has 100 students and a competitive waitlist.

Though Gansburg doesn’t plan to move the Hebrew School to his new digs, he will invite students to the Family Shul for monthly special events. Those field trips will occur in a forty-foot-wide multimedia room featuring floor-to-ceiling screens. The theater experience will bring the lessons to life by projecting an immersive environment. Before Passover, for example, the screen will showcase a giant matzah bakery with an actual oven centered in the middle.

The building will also feature a dedicated teen lounge in the basement. “A lot of kids go through our Hebrew School, with approximately fifty graduating each year,” says Gansburg. “The next step for us is to have a full-time dedicated staff for teens with a lounge and game room for their activities.”

In the northern part of the city, Rabbi Shmuli Nachlas is building an entire campus solely for teens. “We’re just getting out of the ground,” the rabbi exclaims as the cement is poured for the basement, ahead of a planned spring 2021 opening. The site was purchased six years ago for the Jewish Youth Network’s new $12 million campus. While Nachlas’s programming currently engages 500 youth per week, the teens are spread out over four rented locations across the city. “The potential here, and our hope is, to be able to host 2,500 kids a week in our new space,” he says.

“Local philanthropists ask themselves, ‘What are the tools and mechanisms to keep the younger generation inspired and Jewish?’” says Nachlas. “They see the lack of Jewish continuity in the broader community and that Chabad is capable of and committed to keeping youth engaged. And they know that in order to achieve this, they need to back it.”

Nachlas says the space will feature classrooms, a cafe and lounge, and a gym. But what he is most excited about is the use of the mundane spaces. Together with an environmental graphics agency based in Los Angeles, Nachlas and his teen advisors are transforming the walls and hallways into a “call to action.” The team is bringing the Lubavitcher Rebbe’s “Ten Mitzvah Campaigns” to life through interactive, colorful displays along the byways of this 27,000-square-foot center. “Just by hanging out in the building, without being taught or lectured to, teens will come to learn about and appreciate these lessons,” says Nachlas.

Back in Richmond Hill, Len Abelman is giving back to the Chabad community that welcomed him as a new immigrant. He joined Rabbi Mendel Bernstein’s congregation after emigrating from Umhlanga Rocks, South Africa, where he attended Chabad in his youth.

As a principal at the prestigious WZMH Architectural firm, Abelman meshes modern architecture with the richness of Judaism’s history and tradition. “I selected materials such as local limestone that reflect the timeless quality and permanence of the Jewish religion,” he explains. “Yet it was ordered to be cut smooth from the quarry and against the vein to give it a more modern look.” He also wove copper into the structure, in a nod to one of the holy Temple’s components. “The concept for the main east façade viewed from the street is an abstracted view of a person wearing tefillin and wrapped in a tallit,” he continues. “The box of the tefillin is actually the Torah’s ark protruding through the front glazing of the building and the tallit is a stone frame shielding the windows. I am looking forward to the first morning prayer service in the summer—for the copper to glow in the sun when it rises further to the east.”

With so many projects happening in the city, each Chabad emissary gratefully relies on his own constituents to help build and fund. Many credit the beauty of their buildings to in-house engineers, architects, and designers.

Rabbi Menachem Gansburg says his capital project is unique because it has no lead donors (yet). With a younger congregation and fewer disposable assets, Gansburg knew that funding would be a challenge. So he decided to meet it head-on. “I met with 120 young families who each committed to x amount per year for y years. We raised millions this way,” he says. “Now I take families on tours of the construction, and you hear the kids exclaim, ‘this is what Daddy gave money to!’”

“There is an amazing sense of ownership and pride,” Gansburg continues. “This is our shul. This is what we built.”