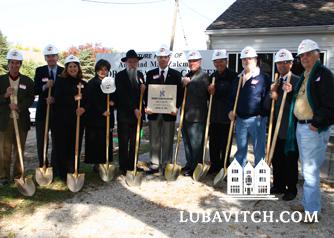 “We’re finally getting the women out of the kitchen” said Victor Bergman, a prominent Kansas attorney and Chairman of the Lubavitch Torah Learning Center in Overland Park, Kansas.

Groundbreaking ceremonies were held recently for their long-awaited new facility, a 6,000 square foot, $1.5 million dollar complex in memory of long time supporters Max and Anna Zalcman. “Our old shul was so small, the women had to pray in the kitchen” said Bergman.

An enthusiastic crowd of more than 200 members, friends and well-wishers, including Congressman Dennis Moore (Third District  -KS) came out on a balmy Sunday morning to watch as the massive Jerusalem-stone foundation was carefully laid.

The new building, five frustrating years in the making, was held back by several construction glitches and some financial setbacks, but it’s now scheduled to open in just a few months. Rabbi Benzion Friedman, director of the TLC said that he hopes to be in by February or March “in time to celebrate Purim with a really great party.”

Friedman and his wife Esther, director of the Jewish Women’s Institute, have been reaching out to the Kansas City Jewish community for over 25 years. “The Torah Learning Center was established to engage people in every walk of life and in every age group” says Bergman. “The Friedmans are master teachers and have inspired so many to join our host of programs. Our growth has been amazing to watch. We now have four Chabad rabbis and their wives on staff.”

Bergman notes that the design by architect Vince LaTona “includes a ‘phase B’ two-story classroom and library complex which I’m confident we will be needing in the near future.”

Rabbi Friedman is excited about another project that the new facility will allow them to expand. “We call it Project Smile." "It’s a major volunteer program to visit senior citizens in every nursing home in the city.” The new commercial kitchen will also be used to offer kosher cooking classes and to provide home-cooked kosher food for Jewish hospital patients.

Ironically, it was a hospital visit that led to the funding of the new building. Max Zalcman had been speaking to Rabbi Friedman for over a year about naming the building in his wife’s memory. “But somehow, it was never the right time” says Friedman. “Then Max himself became critically ill and miraculously pulled through. When I visited him in the hospital, he told me that the only reason G-d kept him alive was so that he could donate the building in Anna’s memory.”

“This is surely a fitting memorial to this wonderful couple” says Friedman “because the sounds of heartfelt prayer, study and Jewish learning will G-d willing continue to emanate for many, many years from the Anna and Max Zalcman Torah Learning Center.”

Related Articles
View All
Lubavitch Rabbi in Leavenworth
When Rabbi Bentzion Friedman received a call recently from the United States Penitentiary in Leavenworth, Kansas, he assumed it concerned his monthly visits to the…
New Centers
New Center For Chabad At Oberlin
New Chabad center is first permanent Jewish presence in Ohian city
New Centers
New Shluchim to the Crescenta Valley, CA
Rabbi Mendy and Mushka Grossbaum have been appointed to open the first Chabad center in Los Angeles’ Crescenta Valley. The couple plans to move to…
New Centers
New Shluchim to Erie, PA
Just as soon as coronavirus restrictions ease up, Chabad will open in Erie, Pennsylvania. Rabbi Dovie and Mushkie Kivman will move from their home in Brooklyn to serve…
New Centers
Growing Gains in Toronto
Even as he cut the ribbon on the doors of the Romano Chabad Centre, Rabbi Mendel Bernstein knew it was too small.
Get Inspiration to your inbox!
Newsletter
Join our weekly newsletter for inspiration and updates
Donate
Find Your Local Chabad Center
Chabad
About Chabad-Lubavitch
About Chabad Lubavitch
The Rebbe
Headquarters
Magazine
Magazine
News
News & Updates
In The Media
Impact
Social and Humanitarian
Social and Humanitarian
Education
Education
Community
Community