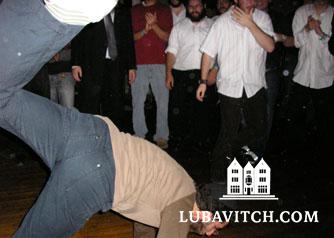 A breakdancing move at the end of Shabbat.

Gabe Rosenthal is President of Jewish Student Life at the University of California San Diego. At the conclusion of the wildly popular Chabad-on-Campus International Shabbaton in Brooklyn, Gabe submitted his take on the experience to Lubavitch.com.

For Jewish college students, making the decision to show up to a Friday night service and meal held at their local Chabad on Campus is probably the easiest decision they’ll ever have to make during their years in University.

These Shabbos meals are a quick and easy way for students to take their minds off of school for a bit, hang out with friends, and dip into their spiritual pools. Did I mention the free, delicious, multi-course meals that are served there?  For those of you who haven’ t experienced college, or maybe it’ s been a long time, a free on campus meal is to a student about as valuable as gold is to a leprechaun!

I cannot tell you how many times I’ ve sat through four hour lectures on things like “the importance of toenails” or “the cranial capacity of an Australopithecus”  all because I was told that free coke and chips would be served afterwards!

Thursday morning, as I boarded my plane from San Diego (Go Tritons, woot woot!) to Crown Heights, New York, for the International Chabad Campus Shabbaton ‘07, I wondered if I would be the only student there. After all, how many students would give up a much valued weekend and some of their own money to travel for a Shabbos meal that they are used to getting for free on their own campuses?

Additionally, a certain non-Jewish (read “goyeshe” ) dress-up event would be partying all over college campuses that very same weekend. Let’s not forget that many students in Boston and Colorado are probably glued to their television screens watching the World Series.

To say that I underestimated Chabad and the Jewish student body would be an understatement.  First of all, the event “sold out”  and registration was closed well before the actual event took place. In fact, a waitlist for this event had to be created. Also, on Friday night, there were over 700 chairs set up for the students, and every one of them was filled!

Around 850 to 1,000 people were estimated to have taken part in this weekend. I would imagine this to be a pretty low estimate, considering that the Saturday nite (motzoei Shabbos) festivities were standing room only in the massive Oholei Menachem dining hall.

Farbrengens were had, huge meals with great food were served, songs were sung, dances were danced, and an amazing concert featuring The 8th Day and Third House Rising (led by the Grammy Nominated, Lawrence Dermer) brought the crowd to their feet! Chabad provided unbeatable Jewish entertainment like only Chabad could (which shouldn’ t come as a surprise), but the event was far more than just a great party.

On Shabbos, there were six lectures/discussions to choose from, led by world renown Rabbis, Rebbitzens, and other guest speakers. These forums tackled such topics as dating, business, ethics, and kabala. Perhaps the most popular of these lectures were the ones that had to do with Jewish dating.

Jolene Ilkay, a student from CSULB, felt that the “Kabala and Dating” taught her the essence of what we should be looking for, and [what we] shouldn’t  be doing when looking to date.”

Andrea Davidowitz, a student from USC, felt that she “didn’t know a whole lot about Jewish dating from a Torah perspective”  before this lecture, and now she feels like a “better person, and more whole, and a bit more spiritual”  with her newly gained knowledge.

Other college students were emotionally touched by the massive displays of Jewish unity that occurred throughout the International event.

Rebecca Pasternak, a grad student at Columbia University, particularly enjoyed singing the same Jewish songs that they sing at her own university only this time with “students from so many different universities!”

Others, like Rebecca Rabizadeha, a student from CSUN, were amazed by the sight of the major Havdalah ceremony, which gave her a “sense of unity”  between all the Jews at the Shabbaton.

Also, a few Scribes were on hand to write a Torah at the event, which gave students the opportunity of donating and helping out with the mitzvah of making of a new Torah scroll, which will soon be used by students in Israel.

Some students at the Shabbaton say they’ve been greatly impacted by Chabad events like this one, and by the several Chabad On Campus events that take place all the time at their local University Chabads.

Matthew White, a student at UC Berkeley and a former Reconstructionist Jew who now considers himself to be a Ba’al Teshuva, feels that this trip is “instrumental in what it means to be part of a Jewish community,”  and he “getting to know what it means to be an observant Jew” while he is here, and while he is with his friends at their own campus Chabad.

For David Barrocas, a CSUN student, the Shabbaton and a visit to the Rebbe’s Ohel [resting place] impacted him tremendously. These experiences gave him an “understanding and meaning to his life.” He now plans on finishing up his bachelors degree, and then going to the Mayanot Yeshiva where he plans on getting another degree: Smicha—[rabbinical ordinationa]!

All in all, the Shabbaton was a tremendous experience for all of the people in attendance. Some students lives were changed, and other students just had an excellent and spiritual weekend.

The International Chabad On Campus Shabbaton ‘ 07 was probably best summed up by Jacob David Shochet, a student from the University of Illinois and a juggler in training: the Shabbaton was “one big good, all positive, everything is really good!”