From the US Air Force to the “Mitzvah Tank” 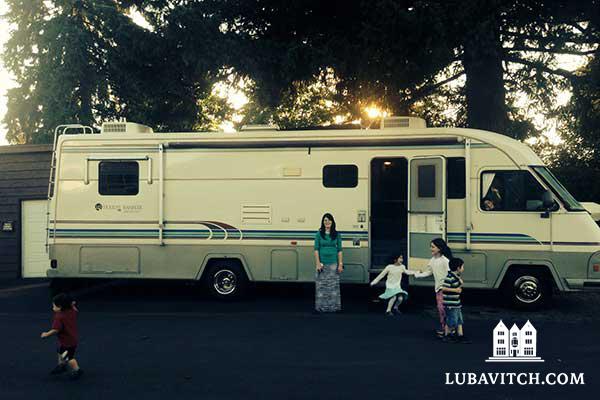 The Estrin family ready to use their new mobile home to reach Jews across the Washington University campus.

He made history this month when he was inaugurated as the first bearded chaplain to the air force, and now Rabbi Elie Estrin is making news again, this time for bringing a tank to Washington University. Estrin, who heads the campus Rohr Chabad House, together with his wife Chana, inaugurated a mobile home, dubbed the “Mitzvah Tank,” to enhance Jewish awareness at the university.

Estrin will be serving in the Air Force Reserve as a chaplain with the 62nd Airlift Wing HC at Joint Base Lewis-McChord, near Tacoma, Washington. His appointment was only made possible this past January, when the military lifted their restrictions permitting items of religious dress and grooming, such as headgear and beards.

Estrin, who expressed his willingness to join the Air Force after several military personnel and veterans came to the Chabad center, says that he feels humbled by his swearing in. “Joining the ranks you feel like you are a continuation of American history. It is a part of joining something for the greater good, while placing your personal desires and needs on the side for others.”

Estrin was guided in the process by the Aleph Institute, the Chabad-Lubavitch organization serving the spiritual needs of Jewish military personnel across the globe.

The Mitzvah Tank, which came into use in the early 1970’s, and has since become a familiar fixture in many cities, offering Jews the opportunity to participate in a mitzvah on the go. Today these mobile homes, from Russia to California, are synonymous with Chabad-Lubavitch and its goal to reach every Jew, no matter where they be.

“With the young men’s frequent queries of ‘Are you Jewish?’ and their entreaties to men to wear phylacteries [tefillin] praying and for women to light Shabbat candles, theirs is an unabashedly up-front outreach. Worried about being lost to the forces of assimilation that swirl around them, they seek to offer an alternative,” the New York Times once explained the phenomenon.

Chana Estrin says that the mobile home will be a community center, classroom and kosher lunchroom, bringing Jewish pride and accessibility to the dorms, Greek Row, Red Square and nearby campuses.

The idea, she says, is to make Judaism accessible to the wider Jewish community, and provide them with opportunities to connect with their Judaism.”