From the Archives: In Transition 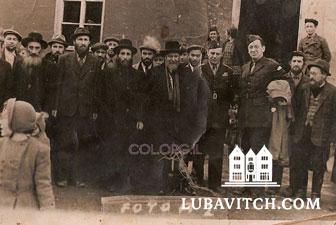 A Lubavitch delegation from the United States with survivors and officers at a DP camp in Germany, around 1945.

A delegation of Lubavitch from the US shown here with survivors and officers sometime in 1947, at the Poking DP camp in Germany. Hundreds of Chabad Chasidim were interned in the camp, which openend in January 1946 and reached its maximum of 7,645 Jewish inhabitants on October 19, 1946. It had several Talmud Torahs with more than 200 pupils, as well as a Lubavitcher and a Klausenburger Yeshiva with a combined 500 pupils. The camp closed on February 16, 1949.