From Pasadena to Rostov-on-Don: A Jewish Family Makes A Radical Move 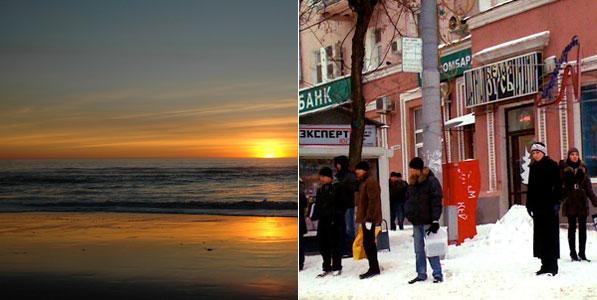 (lubavitch.com) Americans across the economic spectrum have radically lowered their living standards in the past two years, in ways many had never anticipated.

For most, it was a matter of numbers, not choice. But one young couple’s decision to give up their car, their home, and the comforts of an all-American life, had nothing at all to do with the economy.

In December 2008, Chaim and Kaila Danzinger packed up their belongings, traded in their children’s beach toys for down coats with extra loft, and bade farewell to a community they have come to love in sunny Pasadena, California, for one they felt needed them even more, in frigid Rostov-on-Don, Russia.

“Assimilation here is at around 95 percent,” says Chaim Danzinger, trying to explain what motivated him and his wife to make the move. “So you have a narrow window of opportunity to reach Jews—basically between the ages 20-24, before the risk of losing them becomes even greater.”

Danzinger, 28, spent several years as a rabbinical student in Ukraine and Russia. After he married Kaila Estrin from Pittsburgh, the couple was recruited by Rabbi Chaim Hanoka to Pasadena, where they lived for two years and began to build a family.

Chaim was program director at the local Chabad House, led JLI and adult education classes for students at Caltech. Kaila worked as a preschool teacher. And the living was pleasant.

But Chaim hankered for the extreme challenge that he felt could only be had in a place like Russia, where Jewish life had come to a halt for nearly a century. “He kept talking about shlichus in Russia,” his wife says. Knowing that fewer candidates are drawn to Russia than to California, the need seemed more urgent to Chaim, she explains.

Although Kaila, 26, spent a summer as a counselor in Moscow and Simferopol, she “never imagined living here.” But with her husband coming back to the idea again and again, she finally began to consider it.

Chaim contacted Russia’s Chief Rabbi Berel Lazar. Most Chabad representatives in the FSU are either Israeli, or homegrown shluchim of Chabad communities that have developed there over the past two decades. Of 400 couples serving as shluchim in the FSU, only about 30 are made up of one American, and fewer still like the Danzingers, where both husband and wife are American, says Rabbi Lazar.

But Rabbi Lazar was open to having the Danzingers join the network of Chabad representatives in Russia. “What’s important to us is not where the shluchim come from, but that they can meet the standards and needs of the community,” Rabbi Lazar told lubavitch.com.

Language, and the ability to understand the culture and mentality of Russian Jewry, he adds, are essential. Chaim’s summer stints served him well on both counts. So Rabbi Lazar suggested a number of cities, and the Danzingers went on a scouting mission.

What attracted them to Rostov, says Kaila, is the city’s unusually large young population. “We saw a lot of youth, many young people and college age kids.” The need and opportunity were immediately apparent, and the Danzingers have not been disappointed. The couple hosts some 100 people every Friday night, 40 of them college age students who participate in the prayer services and join the festive Shabbos dinner.

There’s a sense of urgency in Rostov, explains Chaim, that’s decidedly unlike the laid-back pace on America’s west-coast. “There’s no comparing the lifestyles. In Pasadena, we had beautiful views of the sun and the mountains, we spent time with the kids in local parks, and enjoyed warm weather year round.”

While Pasadena’s winter temperatures average at a balmy 60 degrees farenheit, in Rostov, the mercury hovers at about 15 degrees. “Here you can’t just hop into the car (the Danzingers don’t own one) and go to Target to get stuff.”

Kosher food is also hard to come by in Rostov, and the Danzingers must drive four hours across the border to Donetsk for basic kosher products. Kosher meat is shipped from Moscow, a 20-hour train ride. As Kaila points out, everyday essentials that were easily obtainable in Los Angeles now require serious planning.

Kaila works as the administrator for the local Ohr Avner school where she oversees the Judaic curriculum and is a Judaica instructor herself. In addition, she’s busy working with teenagers and college students who, she says, “are different from their American peers. Here, when I get together with a group of girls, they want to get into conversations of real substance. We don’t need to plan fun ideas as a way of drawing them in.”

Twelve months into their new lives, the Danzingers have earned Rabbi Lazar’s warm approbations. “They are like fish in water,” he tells lubavitch.com. “They are doing incredible work. People in the community love them. We are seeing a lot of success in their work.”

The Danzingers are especially proud of Rostov’s history.

“A really big factor in choosing Rostov is that we have the Ohel [resting place] of the Rebbe Rashab—the fifth Chabad Rebbe [Rabbi Sholom DovBer, 1860-1920] here.” Rostov was a significant Chasidic hub at one time. “It is an amazing feeling to walk down the streets knowing that I am treading on same ground as the Rebbe Rashab and an older generation of Chasidim.”

More interesting still, Kaila says that Jews who know almost nothing about Judaism seem to experience an immediate connection with Chabad’s history here. In ways that are strikingly different from American Jews who have no religious background, here she says, “Even though most Jews here are non-observant, they want to go to the Ohel, and they feel a connection.”

Rostov’s Ohr Avner school counts 140 kids; the city’s Jewish preschool has 20 children enrolled. A host of student clubs, a vibrant STARS educational program for college-age students are substantial enough in size that the Danzingers recently sent a group on a Birthright Israel trip.

“There’s so much activity here, that our lives center almost exclusively on home and shul,” leaving the couple with little time to notice and miss the things they enjoyed in their “past” lives.

The Danzinger children now visit their grandparents via skype. They haven’t had meat or poultry in six weeks, and instead of picking up pizza or sushi at the local kosher café, Kaila’s kneading pita bread and making wraps and tomato sauce from scratch.

Asked if she sometimes questions the move she made, Kaila says, “It depends on the day—many days I come back from a program and am on a high. The sense of real accomplishment confirms why I’m here. And there are other days where I need to remind myself why we moved here.”

Three year old Mendel Danzinger, and his one year old brother Yakov, are too young to appreciate their parents’ idealism. But they are among the first children of American Jews who will grow up in Russia, turning the old model (of Russian immigrant parents with American-raised children) on its head. Indeed, Kaila admits that it took her time to come to terms with the idea that her California-born children “will probably speak with a Russian accent.”

But, she offers, “They’ll grow up with a stronger identity as Jewish role models,” than they would growing up in an LA Jewish day school.

“They’ll also probably be better at mathematics, science and music.”

Related Articles
View All
New Centers
New Center For Chabad At Oberlin
New Chabad center is first permanent Jewish presence in Ohian city
New Centers
New Shluchim to the Crescenta Valley, CA
Rabbi Mendy and Mushka Grossbaum have been appointed to open the first Chabad center in Los Angeles’ Crescenta Valley. The couple plans to move to…
New Centers
New Shluchim to Erie, PA
Just as soon as coronavirus restrictions ease up, Chabad will open in Erie, Pennsylvania. Rabbi Dovie and Mushkie Kivman will move from their home in Brooklyn to serve…
New Centers
Growing Gains in Toronto
Even as he cut the ribbon on the doors of the Romano Chabad Centre, Rabbi Mendel Bernstein knew it was too small.
Get Inspiration to your inbox!
Newsletter
Join our weekly newsletter for inspiration and updates
Donate
Find Your Local Chabad Center
Chabad
About Chabad-Lubavitch
About Chabad Lubavitch
The Rebbe
Headquarters
Magazine
Magazine
News
News & Updates
In The Media
Impact
Social and Humanitarian
Social and Humanitarian
Education
Education
Community
Community