Fourteen Chabad Centers in the Running for $20k 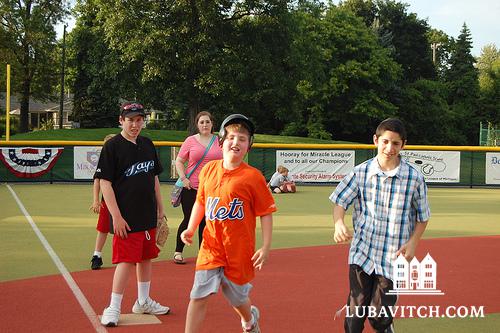 All News
By S. Fridman

(lubavitch.com) Some 14 Chabad centers are now within the top 200 most voted for non-profits in the U.S.  The votes are accumulating on the Chase Bank Facebook, as charities compete with each other for a share of the $5 million it will be giving away on July 13.

In an economic climate that makes it difficult for many donors to give to their favorite charities at the same levels as they had in the past, Chase Community Giving is encouraging them to give third party. “It’s a new Way Forward for giving” says its Facebook campaign page, and many non-profits desperate for funds are working hard to get fans and supporters to log onto Facebook and give with their votes.

Most of the Chabad centers have entered their Friendship Circle, a popular program that offers support and assistance to special needs children and their families with a host of creative activities. By pairing the children with local teenage volunteers, Friendship Circle has won grassroots support in each of the communities that benefit from the program. But the group also includes schools, such as Chai Preschool of Silicon Valley, a Chabad run school.

Charities must be 501(c)(3) organizations with annual operating expenses of $1,000,000 or less, and must meet other listed requirements.

The Friendship Circle began in 1994 with just eight volunteers visiting three children every week as a community service program by the Chabad Center of West Bloomfield, Michigan. Other Chabad centers quickly followed suit, and today, there are more than 70 Friendship Circles worldwide.

Rabbi Yossi Marcus of North Peninsula Chabad is not surprised that so many Chabad centers are in the top running. “Chabad shluchim put their heart and soul into the work they do and people respond in kind. They feel passionately for Chabad programs and are willing to take the time to vote.”

Most non-profits find it easiest to gain votes from people who’ve been helped, he explains. “That’s why some of the highest ranked charities are ones with huge base of beneficiaries.”

The challenge, he says, comes in getting friends of friends to vote. “That one degree of separation is a killer.”

Representatives at the 14 Chabad centers say that if those who benefit are passionate enough, they’ll go out and get the votes from others..

“These charities are already positioned to win,” says Rabbi Marcus. “But can use more votes to secure their position.”

Click Here to vote for iVolunteer   To vote for the Chai Preschool of Silicon Valley Click Here.

Related Articles
View All
Education
Remembering Rebbetzin Chana: Jewish Feminine Role Model
A feminine role model of Jewish activism and proponent of Jewish scholarship, is being remembered today, on her yahrzeit.
Education
Beginning With Shabbos
Start the children’s school day right, and the rest will follow.
Education
Jewish In Berlin And Scoring High
If Jewish parents in Berlin worried that sending their children to a traditional Jewish school would leave them with compromised scholastics in math, history, and…
Education
Florida Schools Set for Silent Start to the Day
Landmark bill passed with bipartisan support will mandate a moment of silence for 3 million public school kids.
Get Inspiration to your inbox!
Newsletter
Join our weekly newsletter for inspiration and updates
Donate
Find Your Local Chabad Center
Subscribe
|
Log In
Chabad
About Chabad-Lubavitch
About Chabad Lubavitch
The Rebbe
Headquarters
Magazine
Magazine
News
News & Updates
In The Media
Impact
Social and Humanitarian
Social and Humanitarian
Education
Education
Community
Community