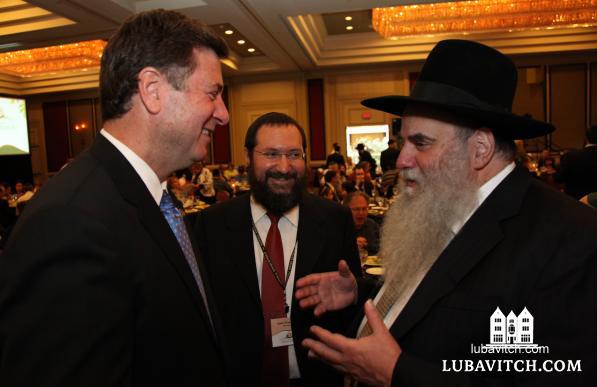 (lubavitch.com) This past Thursday, August 19, George Allen, former Governor of Virginia, gave the keynote address at the National Jewish Retreat in Reston, VA. The following are excerpts from his address.

On growing up as part of a football family:

Growing up in the Allen family, our parents always would impress upon us kids the importance of the 4 F’s in life: Family, Faith, Freedom and Football – not necessarily in that order.

You can learn a lot from football – level playing field, equal opportunity regardless of background, meritocracy, etc.

Indeed, our Family was the only constant cohesive unit, as the coaching profession is in constant movement from team to team and place to place. Our parents would always be telling us children that there is nothing more important than “Family”.

The concept and importance of, Faith was inculcated into our lives with “grace” before supper and prayers before and after games in all the teams my father coached…

The Concept of Freedom was most impressed upon us by my mother. In her own way, she would teach us on the blessings of Freedom. And, in times when we were moping about any situation of lost games, firings or other times of stress, my mother would always put it in her perspective: “at least there are no bombs falling on us” or “no one is shooting through our windows because a light was on.”

My view of life was formed in a football family in sports, training camps and on the sidelines, and playing football, rugby and other sports myself.

A tyrant does not have to be a Nazi storm trooper. He does not have to be a king or
a dictator. He can also be the racist police chief who brutalizes peaceful protesters, or a Klansman who firebombs a church. He can be the jihadist who manipulates a young man or woman into becoming a suicide bomber. He can also be the drug kingpin who terrorizes an entire neighborhood of honest folks, or the gang leader who shakes down the local businesses and drives away all the honest jobs.

On the revelation of his Jewish heritage:

In the course of the 2006 Senate campaign . . . there was an assertion that I had Portuguese Sephardic Jewish ancestors.

. . . I was eating a healthy breakfast at my mother’s kitchen table. While shoveling food into my mouth, I asked my mother if her family had any Portuguese or Jewish relatives.

I thought that … I could add Portuguese bloodlines to the Dutch, Scots and Irish lineage from my father’s family mosaic. I asked if any of these folks were of the Jewish faith. She answered that she was an American, but her parents were French, Italian and a little Spanish, which is not unusual in Europe.

My mother asked me why I was asking about religion? I replied there’s some publication that wrote that I was hiding my Portuguese Jewish ancestry. Thinking it was the usual political hype, I asked in a passing way. My mother replied that she was “baptized by an Anglican minister, Rev. Dunbar in Tunisia, so that makes me an Episcopalian.”

…I then followed up and asked if any of her family way back were of the Jewish religious faith? I asked my mother about possible Portuguese and Jewish roots, I simply said “is there anything to this, many centuries ago?”

After this last of my innocent, cross-examination questions in between spoons of cereal, my mother very seriously told me that she would tell me “something” but only if I swore not to tell anyone… I replied “okay”. She insisted that I “swear” on Popop’s head that I tell no one – [ Popop was a] nickname for my grandfather and  swearing on [his] head was code for deadly serious -Top Secret. I said “yes,
okay. I Swear on Popop’s head that I won’t tell anyone. What is it?”

My mother then haltingly told me that “Popop was Jewish.”

I was surprised. Mostly thinking why all these years this was kept a secret and [how it] was a fascinating discovery. I thought there must be a good way to share this newly discovered aspect with others. I thought it to be interestingly positive. My first audible response to my mother was “why didn’t you ever tell us?” and “amazing, people need to know this.”

Then I looked up across the table at my mother, standing and shaking. She had tears in her eyes. I said “Ma, this is interesting. What’s wrong?”

. . . I asked her if my brothers and sister knew about this – we need to let folks know. She said “Daddy knew” but insisted, “No one is to know”.

My mother apologized for not telling us, but she feared that if Popop’s Jewish heritage and thus ours was known that “Daddy would not have gotten jobs and that she wanted to protect us children.”

She truly feared retribution, prejudice or stigma. I said “you know the Nazis are gone?”

[However my mother was adamant that] this had to be kept a secret. I had to keep my word to my mother. I was internally torn and conflicted, but my mother clearly had lived her life in fear of anti-Semitism restricting or impeding opportunities for her family. Over [those] 50 years she was protecting her husband and babies.

Clearly, the experiences she had told all of us about the Nazis breaking into their home in the dark of night and taking her father to some unknown place continued to cause fear in the heart, mind and being of the person who gave me life, nurtured and raised me…

…There are more stories that my mother had told us of the Nazi occupation before and after this
revelation. She says that her father was incarcerated because he was a prominent businessman as an example to others who were not supportive of the Nazi occupiers and sympathetic to the Allies. I saw in my dear mother that those terrifying experiences of the Nazis had left scars, wounds that still hurt and an enduring fear that caused her to believe the best way to protect her children was to conceal her and their ancestry.

From that day forward, the core principle of freedom of conscience, beliefs and religion was no longer a matter of enlightened philosophy to me; it became deeply personal in my heart-wrenching realization of how fear and persecution so tormented my loving, loyal mother’s life.

[When asked about my Jewish heritage by a] reporter at the debate [in September 2006, it] helped dislodge a cloud that needed to be moved and my mother freed from her burden.

…As I told Wolf Blitzer on his show – I’m proud of my family and heritage. And I wanted to learn more about it, which I have…

While I was Governor, there were a rash of arsons of black churches across the South. During a visit up to DC for a meeting with then-President Clinton, VP Al Gore and federal law enforcement and then-AG Jim Gilmore – I visited the Holocaust Museum.

As I experienced the chronological story of the Holocaust, I thought that is the best museum in that one observes and moves through the museum at your own pace. One thinks, introspectively, about events, the course of WWII. The question of whether we knew of genocide until the end of the War is answered when reading the Cleveland Plain Dealer headlines of Krystal Nacht.

A salient lesson I learned is: when injustice or the ugly head of racism, anti-Semitism, or repression arises, leaders must deplore it. Otherwise, people may believe it to be acceptable or condoned…
We need to understand that the denial of freedom and opportunity to any person anywhere is an injusticethat should be intolerable to freedom-loving people everywhere.

That applies to anti-Semitic desecration of Jewish cemeteries or abuse of Rabbis in Europe to discrimination of black farmers or the terrible treatment of American Indians or denying Christians their right to exercise their beliefs.

[On a more personal level,] all sorts of things happened in that 2006 campaign… [T]he theoretical aspects of anti-Semitism became more personal… My wife Susan, campaigning outside of a University of Richmond football game, witnessed a person who saw my “George Allen for Senate” sign and say “That’s the Jewboy.” Indeed, until last month on Yahoo Search for “George Allen” – a side marketer uses “George Allen Jewboy”.

As repulsive as such ploys are, there are those who will use anti-Semitic sentiments for political advantage. Moreover, there are still some number of extremely anti-Semitic people out there in the world.

On  the Rohr Jewish Learning Institute:

I understand that the National Jewish Retreat, is the largest Jewish Retreat in the U.S. It is another one of the outstanding programs developed by Chabad which has an enormous reputation for its Jewish outreach and educational activities in this country and worldwide…..

For several reasons, on behalf of my whole Allen family, including my mother and father, thank you all and the Jewish Learning Institute, for … asking me to share this personal experience with you.

Rather than just keeping this an oral story, it made me compose this emotional experience for our extended Allen family for posterity.

…I suspect that there are many people in this esteemed audience of leaders from all across America who may have family members who have endured similar challenges in their lives. Thus, this story brings back personal memories of your loved ones and motivation.

… This story can serve as an example for others of the importance of freedom of conscience and religious beliefs, individual liberty, versus repression and intolerance. It surely made me more personally sensitive and more committed than ever to the principles of religious tolerance and honest equality of opportunity for all, regardless of race, ethnicity, gender or religion.

[Finally and] most importantly, let us all resolve no matter one’s faith, ethnicity, race or gender – that no matter what challenge we may face personally, professionally or as public servants – let us resolve that we will not flinch in making our choices. We must and we will always choose to Stand Strong for Freedom!