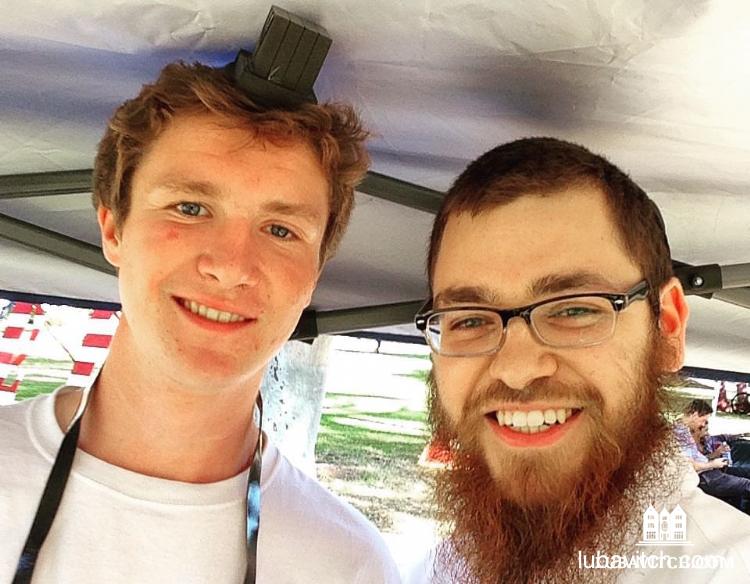 During a two-week period several years ago, Matthew Devlin felt hopeless. The 18-year-old came to rest his head one night on a table in a Manhattan Starbucks. Waking up from a deep sleep, he met a Chabad teen who told him that there was a place called “770” [Eastern Parkway, Lubavitch Headquarters], where he could find some help. At the time, Devlin, who has a Jewish mother and a Catholic father, didn’t know that he was a Jew. But figuring he had nothing to lose, he used his last Metrocard swipe to travel south to Brooklyn.

His life changed that cold March night. And these days, Rabbi Matis Devlin, as he is now called, is sharing the warmth. The Chabad representative to the University of California Riverside has a goal: to make sure each student knows they belong.

“I grew up going to Catholic school. My family attended church every Sunday and I sang in the church choir,” recalls Devlin. Though his mother never converted to Christianity, she raised her 11 children as devout Catholics. The only vestiges of Judaism in their home were candles on Chanukah and a Seder on Passover. Throughout his school years, friends would tease him about being half-Jewish.

All was well on the surface until Devlin was expelled during his senior year of high school. “And quickly, my life spiralled out of control. I had to leave my parents’ home and then when I lost my job, I was evicted from my apartment.” Substance abuse only compounded his issues. In an attempt to start afresh, Devlin got into his car and headed to New York City.

Sleeping off his misery in a warm Starbucks, Devlin and the Chabad youth talked for six hours. After convincing him that he was Jewish, his new friend advised him to seek assistance in Brooklyn. “Within a minute of entering Chabad Headquarters, someone approached me speaking Hebrew. I indicated that I didn’t know the language, but he soon had me strapping on Tefillin. ‘It’s your bar mitzvah,’ he told me enthusiastically.

“It was strange and bright in there, so unlike the dim, depressing atmosphere of the church I grew up in. I thought it was weird, the men swaying and muttering with sheets over their heads. I told myself I would just do the thing with the straps, and then leave.”

Been There, Done That

Since September 2015, when Devlin and his wife, Nechama, arrived on the campus of UCR, he has helped students “do the straps” regularly. And now that he is convinced of the verity of his own heritage, he is eager to pass on this passion.

The couple and their young son “table” each Wednesday, setting up a tent on the ’ main drag of the campus. From behind his folding table, Devlin calls out to passing students, asking them if they are Jewish. “When we get out there, I text people and they start coming by to say hello, to introduce me to a friend of theirs, to talk about what’s going on in their lives.” When they aren’t catching up or meeting new people, the Devlins are busy growing their new community. Tanya and Tea taught every Sunday by Mrs. Devlin is followed by Monday’s Pizza and Parsha and Chabad Night on Wednesdays. Students gather to bake challah on Thursdays in honor of the week’s highlight, the ever-popular Friday night dinner, the menus for which are posted on Facebook in advance.

In their short time at the school, “they have created a much stronger sense of community and have provided a more religious environment here,” says Benjamin Brown. The fourth-year Creative Writing and Political Science double-major serves as vice-president of both the campus Hillel and Chabad groups. “It’s hard to measure what Chabad has already brought to campus,” Brown reflects. “The life lessons, the religious teachings, their home, a hub that is always open, it’s really all invaluable resources.”

“It was time. The students were begging for a full-time Chabad presence and we also heard from faculty who wanted to see Judaism strengthened on campus,” explains Rabbi Shmuel Fuss, Chabad’s representative to Riverside since 2005. Together with his wife, he had been organizing campus activities, but between their community responsibilities and their growing family, Chabad’s presence on campus was not consistent, he concedes. On their own initiative, several students worked together, writing to philanthropist George Rohr, explaining the need for a permanent Chabad outpost at the school. He responded with a seed grant.

Rabbi Fuss fielded 20 applications from interested couples: last summer, he chose the Devlins. “I felt that the Devlins were the best fit for our diverse school,” he explained. “They have a diverse background, an understanding of secular culture, and a passion for Judaism. They are a great match for the students.”

Devlin relates well to the students. “I grew up in the same world as them. I know the struggles they go through. I think that it’s a lot easier to talk to someone when you feel that you can relate.”

While donning tefillin for the first time in “770,” Devlin was instructed to recite the words of the Shema prayer. He did so, in English. “When I came to the last word, “truth,” I had a powerful realization. I’m Jewish, whatever that means. G-d exists Whoever He is. Torah is truth, even if I don’t understand it. And I need to live a truthful life with G-d.”

Devlin enrolled in Hadar HaTorah, a Chabad yeshiva for returnees to the faith. He donned the traditional garb and began life as a religious Jew. He also made peace with his family after being at odds with them for so long. His mother, he learned to his surprise, was pleased with his new vocation. It turns out, he shares still slightly bewildered, she had been raised in a kosher, Shabbat-observant home.

After two years in Hadar HaTorah, Devlin moved to Chabad’s mainstream yeshiva system where he studied for an additional two years. At 23, he was introduced to his wife, Nechama. With most of his family in attendance, they married in March of 2013.

Though he dropped other vestiges of his past, Devlin held onto his beloved longboard. It’s his favorite mode of transport and he can often be seen zooming around on it.

His presence comes not a moment too soon. Anti-Israel activism is growing steadily on the campus, to the point where several Jewish leaders put in formal requests to transfer to more Jewish-friendly schools. “Jewish students are safe on the campus,” says Vice-President Brown, “but that does not necessarily mean that Jewish students are welcomed by certain segments of the population.” BDS sanctions and a recent pro-Palestinian conference do little to allay their fears.

“If the leaders are afraid or uncomfortable on campus, then where does it leave the rest of the students?” Fuss asks rhetorically. It was the final push the rabbi needed to install a full-time presence here. “Our way, the Jewish way, is not to engage with the darkness, but to engage with the students, to give them more Jewish education, more light. The more knowledgeable they are, the prouder they are, the better equipped they will be to combat anti-semitism.”