An email and an art project shape kids’ response to tragedy 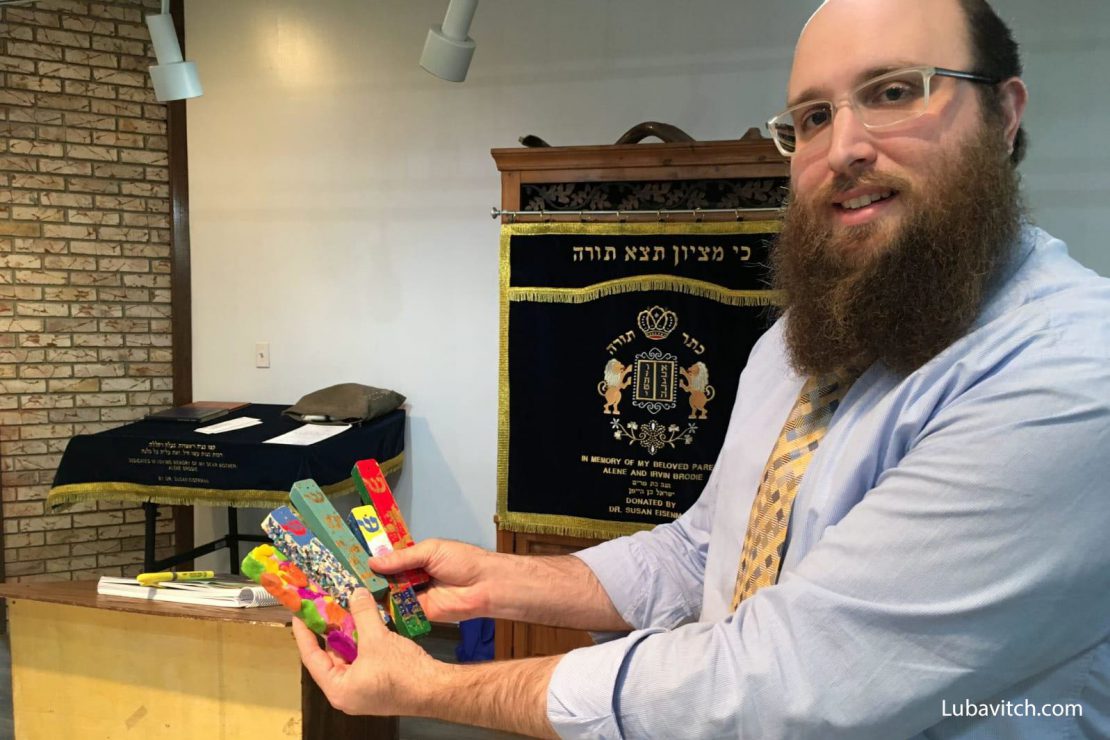 In the days after the tragic synagogue shooting in Pittsburgh, an email from a Chabad rabbi in Pennsylvania helped a New Jersey teacher channel her students’ concerns.

Mendy Schapiro is the rabbi at Chabad of Monroeville, a Pittsburgh suburb. When he heard about the tragedy, he quickly organized a meeting with his colleagues from Chabad centers around the Greater Pittsburgh area. With the Jewish Federation taking the lead on supporting the families financially, the Chabad group discussed a spiritual response. “We wanted to find a specific mitzvah so we could help people channel their reactions into a positive deed,” Rabbi Mendy shared with Lubavitch International.

The discussion turned to the Lubavitcher Rebbe’s response following the Ma’alot Massacre in May 1974, in which terrorists held 100 people hostage at an elementary school in the northern Israeli town of Ma’alot. Twenty-one children and five adults were killed, and sixty people were wounded. In the subsequent days, the Rebbe, pained by the tragedy, promoted a campaign he had announced weeks earlier to encourage people in the mitzvah of mezuzah.

“The Rebbe taught us that when someone hangs a mezuzah on the front door of their home, it’s a sign of protection. It’s also a display of Jewish pride. One is saying, ‘this is a Jewish home and we are not afraid to show it,’” says Rabbi Mendy.

The group took this lead and focussed on promoting awareness of the mitzvah in their communities. To give their endeavor definition, they set a goal to reach 1,100 people with the observance of this mitzvah. For every one person slain at the Tree of Life Synagogue, mezuzahs would now grace the doorway of 100 Jewish homes.

Each rabbi shared the initiative with his contacts, and they set up a website to track their progress. Within days, over 1,200 people from around the world signed up to place a new mezuzah in their home or office, and 1,800 pledged to have theirs checked by a scribe. 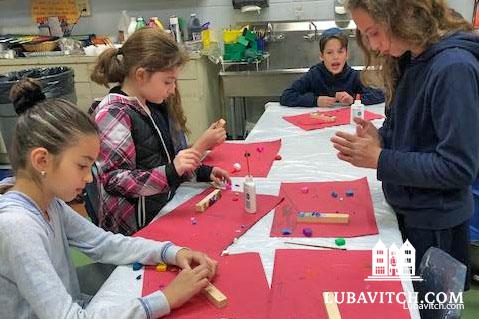 In Englewood, New Jersey, Morah Gila Breter, an art teacher at the Moriah School, was looking for a way to help her younger students respond. The upper grades had initiated projects to increase kindness and respect, but Gila wanted the response for her fifth graders to be something they could directly relate to the Synagogue attack. “We wanted to find a tangible way for such young ones to understand the tragedy and also create something that would benefit the Pittsburgh community,” says Erik Kessler, the school’s executive director. “When Morah Gila shared an email she’d received about Chabad of Pittsburgh’s mezuzah campaign with her students, they were eager to get involved.”

Morah Gila discussed the biblical chapters of the Shema contained in the mezuzah, with her ten- and eleven-year old students, noting that the scroll is hung as a sign of G-d’s protection. They responded well to the message. “It’s comforting to know G-d will be with them as they rebuild their community,” said one student. “We are helping to spread positive light to a community in pain,” another remarked.

During art class, seventy students decorated 101 wooden mezuzah cases and designed posters and cards of support. Morah Gila shipped the students’ gifts to Rabbi Mendy who posted a message on Facebook offering the mezuzah cases free of charge to anyone who would use them to affix a mezuzah on their doorway.

By the time the package arrived a few days later, many of the cases had already been claimed. Inspired, Rabbi Mendy showed the gifts at his adult education class that evening. Twenty participants were moved by this act of solidarity and pledged to hang new mezuzahs in their homes. Word spread fast and over the next few days, the rest of the mezuzah holders were claimed by eager Pittsburghers.

“At first I thought, I have a mezuzah on my front door and that’s enough. But knowing that the whole Jewish world and kids in New Jersey care about us, moved me to buy mezuzahs for the bedrooms too,” one local told Rabbi Mendy. 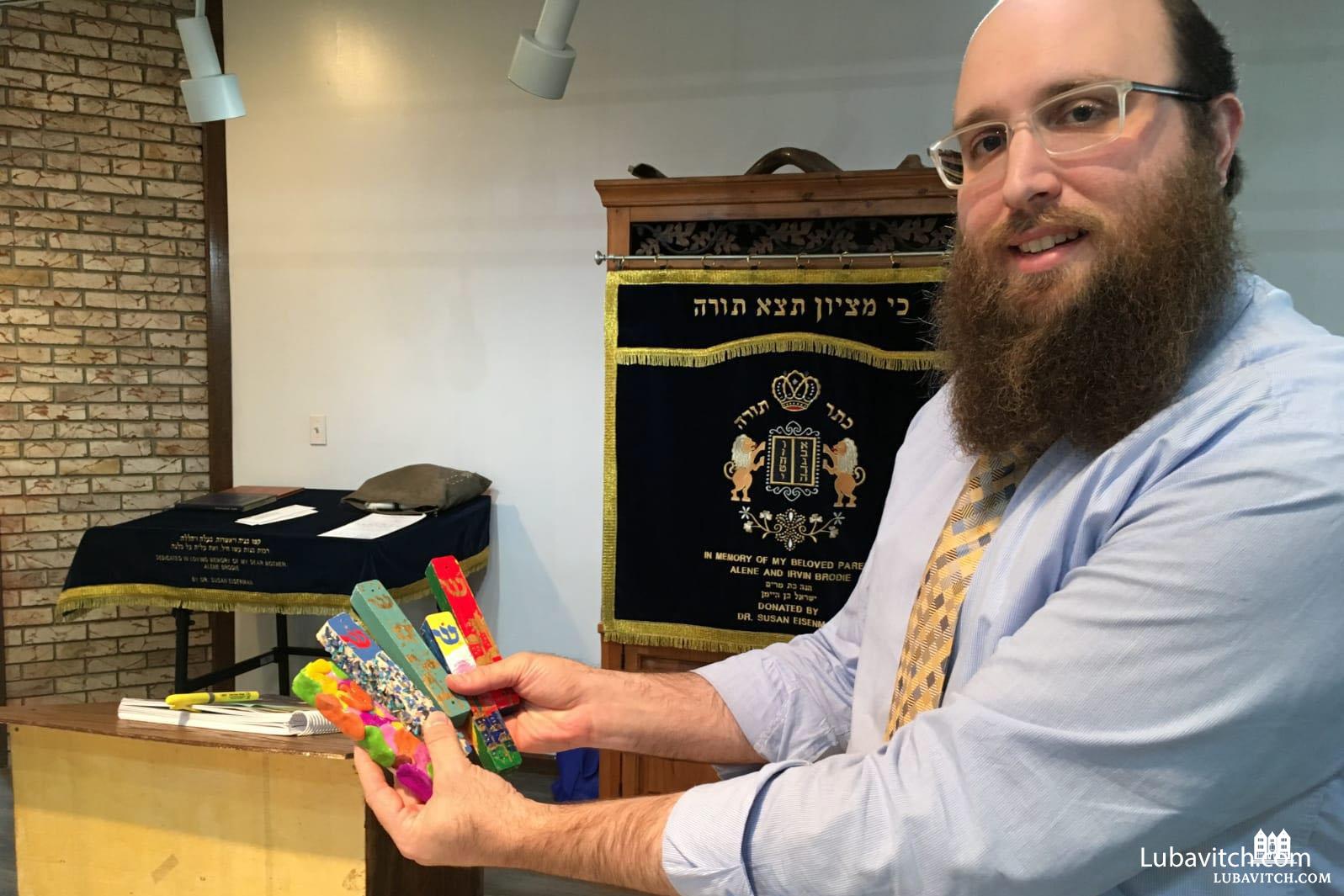 Every day of the seven-day mourning period the rabbis delivered a list of pledged mitzvahs to the victims’ families. Each time they visited, the families expressed their gratitude to the strangers around the world who were doing mitzvahs for their loved ones.

Rabbi Mendy and members of the Monroeville community wrote a letter of thanks to the Moriah fifth graders. “The students were so proud. They got a true sense of am Yisrael chai—the Jewish nation is alive and as a nation, we stand together,” Erik shared.

Rabbi Mendy and his colleagues will turn the campaign into a permanent memorial to the Pittsburgh victims by setting up mezuzah checking clinics. Teams of scribes will donate their time and expertise to give people’s mezuzahs an annual checkup. “Mezuzahs weather over time,” notes Rabbi Mendy. “We will do what we can to help people keep their mezuzahs kosher and pray for continued protection.” 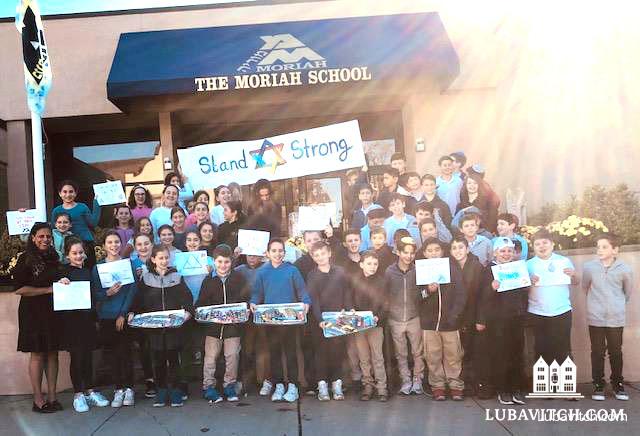