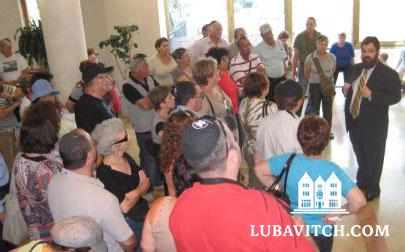 Rabbi Yakov Fridman greets Israeli visitors at one of Chabad’s facilities in Moscow.

(lubavitch.com) “For the first time in my life, a sense of Jewish pride fills my heart . . .”

A humbled Avi Yavin, CEO of a hi-tech company in Israel, spoke earnestly at the end of a visit to Moscow earlier this week. He’d been touring Russia with a group of 40 fellow Israeli business people. Their itinerary included a visit to the Marina Roscha Jewish Community Center, a popular point of interest for thousands of Israeli visitors who come to Moscow on business and leisure trips annually.

Yavin, like his fellow travelers, was thrown for a loop. He couldn’t contain his enthusiasm and ask to get up and speak after he and his friends spent time talking with Rabbi Yakov Fridman who heads Chabad’s division for Israelis in Moscow.

It’s no secret that secular Israelis –for whatever reasons, and there are many—seem least receptive to the kind of outreach that inspires involvement in Jewish observance.

But that often changes when they travel beyond Israel’s borders, to places where they don’t expect to find Jewish life. Rabbi Fridman says he sees this time and again.

“Many who would not think of connecting with a rabbi or visiting a shul in Israel, surprise themselves by a visceral Jewish pride that kicks in when they see what’s going on here,” says Fridman, himself an Israeli who connects easily with the the hundred or so visitors who come through the doors of Chabad’s Marina Roscha JCC in Moscow on an average week.

Fridman greets them, shows them around, takes questions, and hosts a lively Shabbos dinner at the Marina Roscha with an eclectic group of 80 Israelis, and often as many as 150, who are spending Friday night in Moscow.

For first time visitors still harboring images of Russia as a forbidding and oppressive place for Jews and Jewish life, their experience with Chabad in Moscow is jaw-dropping: thriving Jewish universities, yeshivas, a Jewish orphanage, day camps and even sleep away camps in Moscow’s beautiful suburbs, tell a story of a miraculous transformation that doesn’t quite register until people see it first hand.

Under the leadership of Russia's Chief Rabbi Berel Lazar, Jewish life in Moscow is bubbling with activity. Hardly a day goes by without a chuppa, bar mitzvah, or brit mila celebration in Marina Roscha—often there are several celebrations going on simultaneously. To Russian Jews the change is still sometimes unbelievable; to visitors, it is dazzling.

Avi, who served for many years in the IDF, admitted ruefully that he'd always "looked with disdain at Orthodox Jews, and my friends and I have always mocked anything related to religious observance.”

“What I have seen here today, the selfless devotion and holy work that you are doing fills me with Jewish pride for the very first time in my life,” he said in a choked voice.

Yavin only saw a little. Moscow’s kashruth department is hard at work certifying new products for kosher consumers who are finding a growing selection of kosher foods in Moscow’s local supermarkets. Hundreds of the city’s needy are fed regularly in the new Chesed soup kitchen, and meals are delivered to the homebound Moscow-wide.

A Jewish Museum is currently under construction on a massive lot adjacent to a stunning Chabad school where 400 students study Torah—the eighth one now of Chabad’s Or Avner school network in Moscow where some 2000 children are enrolled.

“I only hope,” Yavin told Rabbi Fridman, “that you find a way to do in Israel what you have done here – to achieve the unity and sense of brotherhood that I experienced here today.”