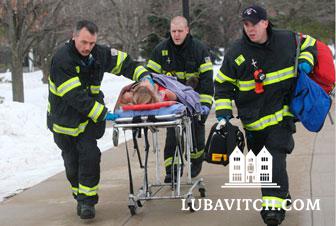 (lubavitch.com/LNS) The individual who opened fire in a Geology (104) class at Northern Illinois University Thursday, police revealed at a press conference early Friday morning, was a former student. Steven Kamierczak killed six and wounded 22 before turning the gun on himself. No immediate motive is known.

But the chilling news started seeping out from Northern Illinois University well before the extent of the tragedy was known. Rumors swirled of a black-clad shooter, opening fire in the midst of a crowded oceanography class mid-Thursday afternoon.

Rabbi Dovid Tiechtel, Chabad representative at nearby University of Illinois at Champaign-Urbana, began fielding calls. While there is no Chabad Center on NIU’s campus, several neighboring Rabbis, including Rabbi Tiechtel, visit and learn with students there as well as host them for Shabbos.

Local students were concerned and needed information. Some have siblings on the NIU campus, others friends. Both universities are state schools, so the students felt an even greater connection with their peers.

“Generally when something happens like this,” says Rabbi Tiechtel, “there is a troubling sense of vulnerability.” A campus they considered so safe, may not be after all. The shooter at NIU was enrolled as a graduate student at the University of Illinois at Urbana-Champaign.

In Champaign, anxious students are flocking to the Chabad House at the center of campus. After regular services Friday morning, students stayed on to pray for their injured peers and in memory of those who died. While Shabbat dinner is always a popular event on this campus, Rabbi and Mrs. Tiechtel are preparing for many additional students who will come in search of community and comfort.

The event is terribly reminiscent of last April’s shootings at Virginia Tech where a disturbed student killed 32 individuals. Rabbi Elazar Bloom who arrived there with his family as Chabad representatives following the shooting, says, “The only appropriate reaction in the face of such tragedy is for us to unite and utilize the opportunity to make things better.”

For students at Virginia Tech it’s déjà-vu, and Rabbi Bloom suggests that perhaps at some point it may be helpful for students in Illinois to speak with counselors and students at his campus.

Paula Stolv is currently enrolled in a Masters program in counselling at NIU. As an undergraduate, she was the Chabad student president in Champaign. She says that Thursday’s scene of chaos was most difficult because no one knew what was happening and whether their friends or family were involved. “The whole focus is on making sure everyone is ok.”

At the moment, says Rabbi Tiechtel, the only thing to do is to “be there for them, be there for all their needs.” Through goodness and kindness, he hopes to bring some light to the Illinois campuses. “The hole in the heart can never be filled,” he says, “the best we can do is putty it up.”