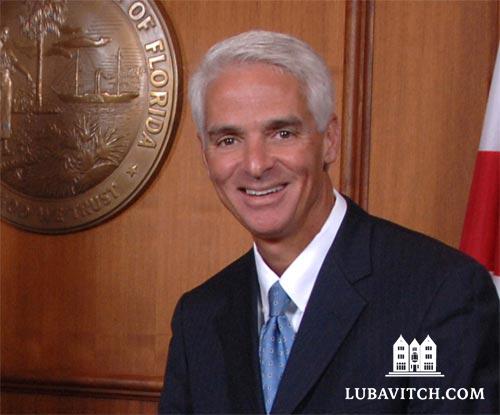 (lubavitch.com) On Monday, Gov. Charlie Crist signed a bill removing the words "shylock" and "shylocking" from the Florida statute books, a term offensive to Jews.

The word, used to describe a ruthless moneylender or loan shark, took its meaning from the character in Shakespear's The Merchant of Venice. In the play, Shylock is a Jewish usurer who lends money to his Christian rival, Antonio, setting the bond at a pound of Antonio's flesh.

"Today I am proud to sign legislation that honors Florida's Jewish community by removing harmful language from Florida's criminal money-lending laws," Gov. Charlie Crist said in signing the bill Monday. "Harmful terms that communicate hate have no place in our society — and especially not in our laws — and the removal of this language is long overdue."

The governor was accompanied by Chabad-Lubavitch representative to Tallahassee, Rabbi Schneur Oirchman and four Democratic lawmakers who worked to pass the bill (SB 318): Sens. Nan Rich and Eleanor Sobel and Reps. Elaine Schwartz and Richard Steinberg.