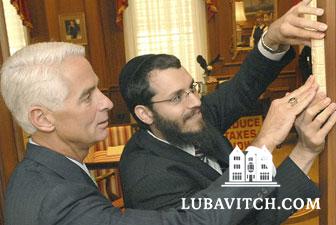 Florida’s Governor Charlie Crist drew the ire of the ACLU and others after he affixed a mezuzah to the door leading into his Capitol office.

The Governor, who put up the mezuzah with the help of Rabbi Schneur Oirechman, director of Chabad-Lubavitch of the Panhandle, defended his decision to have the mezuzah posted on his office doorway as an expression fundamental to the freedom that allows the display of religious symbols and to show respect for Florida’s cultural and religious diversity.

“I think it's appropriate to respect all others, and I think it's important to realize that we have a very diverse and magnificent state,” he told the Orlando Sentinel.

The mezuzah, which contains a parchment inscribed with the Shema, is posted on doorways as a sign of Divine protection. Governor Crist, who is not Jewish, received the mezuzah as a gift from House Majority Leader Adam Hasner, a Delray Beach Republican, while he was on a trade mission to Israel last May.