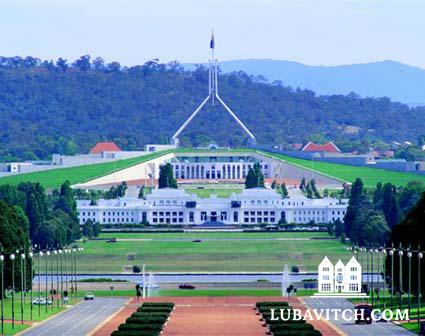 (lubavitch.com) These aren’t easy times for Chabad to be opening new centers, but Australia’s capital city, Canberra, welcomed its first Chabad representatives this week. Rabbi Dan and Mrs. Naomi Avital moved into their new home Tuesday, after a pilot trip and meetings with the city’s lay leaders last month.

This small Jewish community, numbering less than 1,000, is tight knit. All denominations gather for services and programs at Canberra’s Jewish Community Center. Chabad rabbis have visited the city on and off for years, but no rabbi has ever settled here permanently. In 2007, several local women approached Merkos representative Rabbi Ahron Serebransky of Melbourne, hoping he could help them construct a mikvah. Those Canberra women who currently use the mikvah travel six hours to the closest one in Sydney.

The Avital’s new home and Chabad Center was purchased a year ago with the intent of constructing a mikvah. When it became clear that such a project would need to be managed on the ground, and that Jewish life in general needed a boost, the Avitals responded to the call. “The new representatives will build a mikvah immediately,” said Serebryanski. “Together with the locals, they will create a real Jewish presence, a kosher community.”

Eliezer Kornhauser serves as Rabbi Serebryanski’s assistant and co-sponsored Canberra’s Chabad Center. “The new center is in a suburb roughly 20 minutes from the center of town,” he explains. “It is an up-and-coming neighborhood that is being gentrified and has affordable housing.” As the seat of Australia’s government, the city offers many jobs and living expenses are much lower here than in other cities around the country. In addition to the existing community, the Avitals hope to reach out to ambassadors from around the world and attract young families to the area.

Mrs. Avital has plans to open the first Jewish preschool here for the local children, along with a variety of adult educational program that she and her husband will lead.

“I see this city as a thriving Jewish community. I believe that the community will grow and become a place where it is accessible and enjoyable to lead a Jewish life. We will grow in quantity and quality,” Rabbi Avital told Lubavitch.com.

The Avitals ushered in their first Shabbat with a friend from Brisbane, who flew a Torah scroll to town. The couple has invited people to celebrate the holiday of Purim with them in two weeks.

Rabbi and Mrs. Avital will to start off on a sweet note with individual Shalach Manot packages for every single Jew in the city.