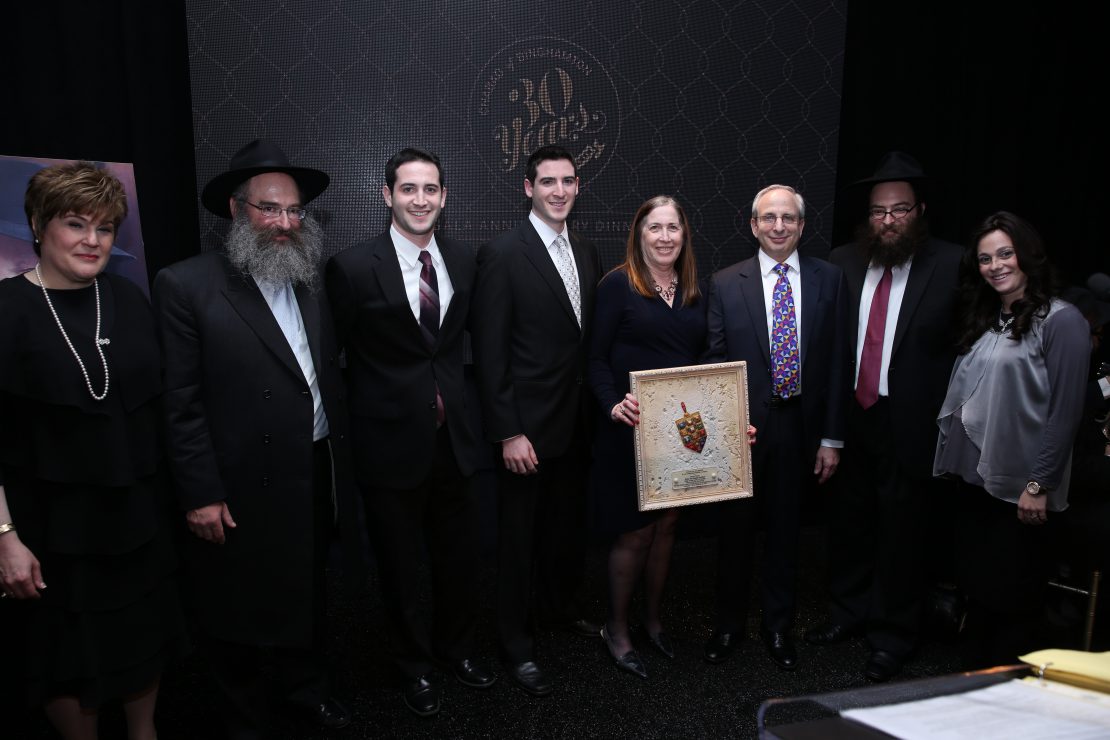 When planning Chabad of Binghamton’s 30th anniversary dinner at a venue in the heart of Chasidic Williamsburg, Rabbi Aaron and Rivky Slonim couldn’t have known that the New York Mets would be facing off that night with the Kansas City Royals in the World Series, only a few miles away at Citi Field Center in Flushing, New York.

So competition was tough on November 1st. Over cocktails and hors-d’oeuvres at a pre-dinner reception, students, parents and alumni hedged their bets on the deciding game. Then, as the lights dimmed and 600 guests took their seats, they changed frequency. New York trumpeter Frank London played a score from Fiddler on the Roof with vocals by Lincoln Square Synagogue Cantor Yanky Lemmer.

Tevye the dairyman was at a loss to explain the whys and wherefores of his Jewish traditions. Not so the digital natives and newly minted college grads who came to celebrate old-fashioned yiddishkeit and its relevance to life made meaningful by those very same traditions.

The event was a mega family-reunion of sorts, especially for alumni, some who hadn’t seen each other since their student years, and many now themselves parents of Binghamton students. For those old enough to remember, the celebration of bonds forged between Jewish students on campus in the 1980s, came as a sweet vindication of Chabad’s foray onto the American college campus, once perceived as a futile if charming experiment.

Back then, few shared the confidence of the Lubavitcher Rebbe and his emissaries that there’d be any serious takers for the kind of traditional yiddishkeit that his representatives were bringing to Jews, particularly to students for whom the college experience was an invitation to shake loose any traces of religious life that yet lingered from home.

But takers there were, serious ones who would carry what they gained from the Slonims and their respective campus representatives forward well after their college years. Rabbi Aaron and Rivky came as newlyweds with a passion for sharing and teaching and helping others access the rich, immersive Judaism that served as the foundation of the life and family they were building together with the larger Chabad House family.

Today parents of nine, grandparents of eight, the Slonims have become much beloved to generations of Binghamton students. Teachers-surrogate parents-confidantes-mentors-and role models on campus, Rabbi Aaron and Rivky are sought out by former students who got to know them 25 years ago, and are now seeking advice about parenting their teenagers, marriage counseling, and negotiating life’s curve balls. The success of this particular Chabad campus center has not gone unnoticed, and the Slonims have also become role models to other Chabad campus representatives.

Reflecting on her early years on campus, Rivky describes an organic process. “We really hadn’t formulated much more than the desire to bring the Rebbe’s message of Jewish education, love and acceptance to everything we do.” But the desire was fierce, and she and her husband took to their calling with an implicit urgency recognizing the small window they would get to bond with students—an opportunity Rivky describes as a “shipboard romance.”

“We know that we have a very short time with these students—at the very most four years, sometimes only one or two, so every day is very concentrated. We try to plant seeds that will blossom and that students will want to see take root in their own lives” as they move on.

Jon Hershowitz (Binghamton class of 1987) was one of that first crop of students the Slonims engaged. Hungry for something more substantive than the thin Judaism he knew, he quickly found his place at Chabad. “I was with them in their living room at the beginning,” he recalls, grateful for the personal relationship that has nurtured him since then. Soon after he arrived to Binghamton, he met his wife Randi. Herself having had a scant Jewish upbringing, she joined him at Chabad.

Shabbat with Chabad on campus—a weekly 450-student affair (and once a year topping off at 1500) popular campus-wide and beyond—seems to be the keystone of a varied Chabad experience. For Rena Ben-Ezra, now a second-generation Binghamton student, it is “not so much about the big events that Chabad sponsors, as it is about the day-to-day, every day” ways in which Chabad brings Judaism into the lives of its students. “For me, for example, Shabbats are incredible.”

But Samantha Hechler would have none of it. As the second year Cardozo Law School student told the guests at the gala, “I’d never gone to a Shabbat or holiday dinner. I was just too busy. I was active in my sorority and in love with Greek life. I attended mixers and parties and wouldn’t be caught at a Chabad event. I just happened to be Jewish.” Judaism, she was convinced “just wasn’t for me.”

Not for her and not, she insisted, for other college students looking ahead—a point she felt she wanted to make with Binghamton’s Chabad representative. So over a period of two years, Samantha met with Rivky every week, peppering her with questions and challenges in an attempt to prove “that Judaism was an archaic fairy tale.” Rivky welcomed Samantha’s questions with characteristic aplomb, seeing their weekly meetings as a constructive learning opportunity.

Students joining Chabad at Binghamton get a rich menu of learning opportunities to sample and choose from: text-based, thematic classes, lectures, and individual study sessions covering the gamut of students’ interests including Jewish law, Jewish mysticism, Talmud, weekly Torah readings, Hebrew language, the woman in Jewish tradition, marriage and more. With its steady growth, Chabad at Binghamton now counts 40 students on its leadership board, and the Slonims have recruited additional staff including Rabbi Zalman and Rochel Chein to focus on educational classes serving 170 students every week. Rabbi Levi and Hadasa Slonim direct programming and development.

And for those seeking community, Chabad offers activities that span social, humanitarian and artistic interests—a number of which started at Binghamton and are now staples on campuses nationally: Mitzvah Marathon honoring the memory of those who perished on 9/11, the Purim Carnival, the Chanukah Toy Drive for children struggling with cancer, and Shabbat 1000—a wildly successful Shabbat program—giving students a sense of belonging and the chance to volunteer for a good cause with other like-minded students.

“The social components of Chabad are about giving back to the community. The leadership they provide is directly related to Binghamton’s core value of community service,” observed Brian Rose, vice president of student affairs at Binghamton.

MAINSTAY AT A SECULAR INSTITUTION

That Chabad should become, in the words of Binghamton University President Harvey Stenger, “a mainstay of campus life for students both Jewish and non-Jewish,” made an intriguing case for its relevance even at a public university. It is precisely in Binghamton’s environment—“at its heart a secular institution” that Chabad, he said, “serves an important role in the lives of students so that they leave stronger in their faith.”

Samantha wouldn’t join a formal study class, and she resisted every invite to Shabbat dinner. But her time spent with Rivky finally, subtly, made her want to open doors that she’d shut. On her travels after college, she found herself yearning for something she absorbed from her many conversations with Rivky. “I realized that I want to keep learning, and that Judaism was relevant to me.” On Rivky’s advice, she took a year off to study at Mayanot, a yeshiva in Jerusalem.

Today, the attractive blonde is grateful. “What made all of this unbelievable was that I remained who I was: a Jewish chick totally immersed in the modern world. But I gained a lot of knowledge as to what [being Jewish] means and how to integrate it in my life. I was totally unconnected and Chabad found even me.”

The recent Pew studies don’t talk about the trends that point to a bright Jewish forecast, and perhaps the numbers don’t quite compute, but in ways that really matter, the facts on the ground are hardly negligible: Multiply the numbers of men and women celebrating with Chabad of Binghamton that night—people like Randi and Jon who, because of their campus experience with the Slonims, have raised strongly identifying, educated Jewish children, or students like Samantha, now on a path to marry Jewish and live a fully engaged Jewish life— at 230 campuses served by Chabad representatives, and you get good reason to celebrate.

Before the evening drew to a close, Rivky announced the launching of the Binghamton University Legacy Torah—a collective effort by students and alumni, each one represented by a letter in the Torah. As guests looked on, the scribe dipped his quill into ink and inscribed the first letters on parchment: Bereishit . . . “In the beginning.” Because, thirty years later, the Slonims—their children now grown and working with the children of Binghamton’s alumni—say this is only the beginning.

A dramatic end to a dramatic event, to be sure. But to this guest, it was a small exchange at one of the tables that evening that underscored the power of the project launched by the Rebbe, known as Chabad-on-Campus. Emulating Rivky and Aaron Slonim—the Rebbe’s shluchim who she observed 30 years ago, Randi now reached out to a reporter at her table, extending a warm open invitation to join her family for Shabbat. “Whenever you’d like. We’d love to have you join us for Shabbat.” The reporter pondered the unexpected gesture of friendship offered to her, a perfect stranger.

“Randi has taken the Chabad directive to help foster welcoming places for Jews and made it most personal, letting me know there is room for me at her table,” she said teary-eyed. “I may in fact take her up on this; but whether or not I do, I’ll never forget that the invitation was made to me.”